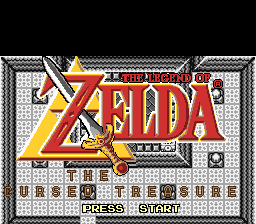 
Story:
Long time ago excactly 10000 years before Hyrule was existed, exist a strange but a cursed relic. We call it the Cursed Treasure. This strange relic was founded in a ancient ruins east of Hyrule.
Nobody knows what was inside this relic however every people who open it was nothing but a demon himself.
So the king was planing to destroy this demoniac relic...
However before he does he died without any explications and without any clues.
So since that the access of this relic was been forbidden. But something horrible happened.
The world was so close to be destroyed whoever an hero that come from nowhere appears.
The hero was saved the kingdom from an evil demon, with a sacred blade.
Now the hero rest in peace in a tomb and then his sword lost his powers.
And an criminal group was try to steal this sword and then open the Cursed Treasure.

Download: The demo is soon ready so you can test the demo version of this quest. Shops and somes houses will be inaccessible for this demo. To enjoy more the gameplay you have to download the music files there:
http://download2170....asure Music.zip

Posted 22 November 2018 - 07:29 PM
oh that was an old bug that i did fixed now. I'll probably upload the demo quest but i'll also upload the new musics from the quest.

I beat the "1st level" but it will not let me pick up the item after the boss.