The legend of Zelda, Titans' gate 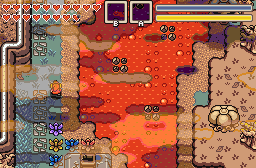 Description
With a unique scripted scrolling.

Edited 14 September 2021 - 11:59 AM
I made it to around the 3rd boss and then kinda dropped the quest. Technically-wise, this quest is extremely impressive, it doesn't even feel like ZC anymore with all the new stuff so honestly great job with that. From what I did play, the quest looks really cool and there are lots of very nice ideas here and there. The fact that you had to redo everything is insane to me and it clearly shows a lot of it has paid off.

However, my main issues come with the fact that while yes this is extremely impressive with the scripting, there are quite a few gripes that just made me drop the quest. I usually try to finish everything before reviewing quests but I had to cut it short for this one. The number one issue for me is that I feel Link moves far too slow. I can't really tell if this is default speed or not but it looks like Link moves a lot slower than he should which made navigating places extremely annoying. Another major problem which made me drop the quest is that if you die, you spawn all the way back in the starting spot. So I have to constantly backtrack and walk all the way back to where I was. After many times of this happening because of dying to the 3rd boss I gave up. I understand because of all the script work put in I'm not sure if it would be viable to have players spawn back at dungeon entrances when you die or not, but if there's a way to do so please implement it. As for something minor, some more dialogue on the NPCs would've been quite nice other than seeing "Yes?" for everyone, but that's not too big of a deal.

Overall from what I managed to get to, it was really nicely made but the lack of continue points and Link's very slow speed really killed a lot of the enjoyment for me. I'll give this one a 3/5, but I will say that I am extremely impressed by all of this despite the major problems I had.

Posted 17 September 2021 - 09:09 PM
Very well done. Just finished the 2nd area (lair) and am exploring now, but did find something odd. I am not sure if you meant to be this way , but as soon as I entered the dungeon (lair), I had a chest available with the boss key, and the boss door accessible.
I did not have to play any of the dungeon to finish it. I am playing it in 2.55 if that helps to narrow it down. Just exploring now.

But way to go on this. Cannot wait to see what else it has in store.

Edited 23 July 2020 - 04:29 PM
The quest is pretty interesting and innovative from what I've seen so far, but is running with way too many unpredictable continue and autosave bugs, the character getting stuck in strange places and in strange ways, key/door issues, and more. Of note is that I'm using ZC version 2.53 b33 (the LTS release from this site) - is the ZC version really that critical? Shouldn't 2.53 be backwards compatible with all quests made for 2.52? I have screenshots and more detailed descriptions of my problems so far, if one is interested.