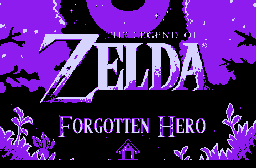 Overview Feature Quest
Information
A quest in the style of NES Zelda, with some Dark Souls inspiration on mechanics.

CAUTION: I believe I have fixed all potential crashes, but do let me know if you experience any.

Description
A quest in the style of NES Zelda 1, with some Dark Souls inspiration on mechanics.

You can expect to die, as this is challenging, but I would not go so far as to call it hard. Much of the difficulty is in the boss fights.
Story
Some time ago, the cycle of the three spirits of the Hero, the Princess and the Demon ended. As a result the people of Hyrule lost their memories.
However, one day Ganon is revived for unknown reasons.

Discover the story of how memories were lost while facing the threat of Ganon's forces in the present day.

Find items, explore and traverse dungeons! Don't forget your Great Fairy Potion.
Tips & Cheats
Take a look at what enemies are around. They can give you a clue as to where you should and shouldn't be.
Wait to kill overworld bosses. They may be too much until you get a couple dungeons under your belt.

Credits
Credits at end of quest.

Edited 24 October 2019 - 07:59 PM
I enjoyed boss fights and exploration both, FH isn't big quest though(I don't like huge and complex dungeon like Isle of Rebirth). With effective items and tactics, most of the boss fights aren't difficult because most boss can be stunned. As regards story, plot twists are seen near the end of quest. I never think FH is so difficult, but I felt the difficulty curve isn't good, first half is difficult rather than latter half because of shortage of items.

I can see most of boss battles and plot twists on my YouTube playlist.

Posted 28 July 2019 - 09:46 AM
While the creator calls Forgotten Hero an NES-style quest, I rather disagree and would describe FH as a boss-slug fest on top of a LoZ-style plot. While there are some interesting mechanics and opportunity for exploration in FH, everything outside of the boss fights has comparably little substance than to tie together a multitude of protracted boss fights.

If you are one of those players who loves bosses that hit hard, are super-buffed with HPs and defense, and require lots of moving around to dodge non-blockable attacks, than this is the quest for you. I can tolerate such challenging boss fights, which require more tactical approach than merely tanking against the boss, but honestly got tired of it by about level-7. My biggest gripe is that pretty much every dungeon and overworld boss is flat-out over-buffed and becomes a tedious and monotonous slog fest. The later overworld and dungeon bosses also have very powerful and non-blockable attacks, which coupled with the incredible amount of health and defense, means you could be fighting the boss for 10-15 minutes. Considering that one is likely to die at least a few times before forming a strategy to best take on the boss, one might get stuck on some of the later bosses for an hour or more.

The bosses in FH remind me a lot of some Final Fantasy rom hacks where the bosses are given an absurd amount of HP and defense buffs, just because, and I guess are designed to appeal to autists or masochistic players who love to zone out and hyperfocus on (IMO) needlessly-long boss fights. While there is a little bit of strategy built in, in that some items can do more damage than others, a common tactic I found most effective was "hide behind the barrier and spam sword beams." Because the bosses have (comically) large hit boxes, they are pretty easy to hit with sword beams or other projectiles. While many bosses have very powerful attacks that can destroy the player in just 1-2 hits, I can say that FH has a good and unique (among ZC quests) potion system that, if you did you duty to explore enough, can allow for many, many healings per boss fight - which greatly helps to mitigate the threat of 1-2 hit death. This is good, because the L3-ring isn't available until very late in the quest. Exploration can also net the player a L3 sword pretty early on, which helps a whole lot, but still makes for way too many hits required to defeat the later bosses.

The overworld design allows good exploration and incentive to explore, as I mentioned, and also means to warp between sections of the map. Screen design is very LoZ-inspired with contrast between neighboring regions. The dungeon design is pretty bland prior to L7, which is a definite high point. Dungeons are pretty combat-centric with enemies who can also lead to a quick game-over if the player isn't careful.

While I am not one of those players who lives and breathes for boss fights, I can appreciate the challenge and creative process involved and feel comfortable giving FH a 4/5.

Edited 14 July 2019 - 03:00 AM
i need some help how to finish level 2 need hookshot but killed several world bosses got white sword from lvl3 got scrolls got bow magical boomerang ...explored almost the whole map except lost woods ... bombed several caves ...but it seems i still cannot finish the level ...can i get some help