Hey y'all, we're back for another small dev talk topic. First a quick progress report: Actual quest development is back in swing! At the time that's mostly overworld mapping, sprite work, debugging and scripting. We are also thinking about the lore, conceptualizing new gameplay mechanics, and making plans for the next dungeons - but these exist on paper only for the time being.

Last time, we talked about mapping the Outset Hills and ended up on a tangent in the comments about interpreting the world design of Z1 and how we came to make the geographical changes on the island level 1 is on. If you look at those three screens from Z1, from an older map that we mentioned last time and what we have in the CC demo right now, you can see how one evolved out of the other. 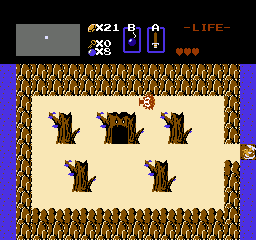 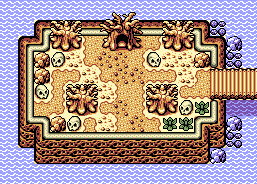 As you've already noticed in the demo, the island is a lot bigger this time. The idea to expand the island into its own proper area came from a gameplay consideration more or less: it felt a little too rushed to just enter the first dungeon six screens off the starting screen and it's really hard (but not impossible, as evidenced by Z1) to set a tone for a place that exists of only one screen. So we decided that the island should be a 4x4 map roughly. This is what it looks like right now on the in-game map, 4x4 without the north-western and south-western screen on the corner.

Whoever used to live on the island is long gone. In its current state, Rotgrip Island is a cursed place, covered in a permanent fog. The major structure on Rotgrip island is a crypt-dungeon, the Eagle's End, resting place of a fragment of the Triforce of Wisdom. Here's the game map showing the island, along with some screens from surrounding areas. The marker is on the entrance to the Eagle's End, a screen from which is displayed next to the map. 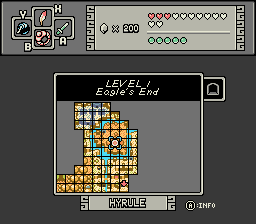 It seemed only natural to take the "dead trees" concept as the focal theme for our reinterpretation of the area, as in Z1 that's literally the only thing this island features. As the tree with the evil face is the most distinctive feature of the original level 1 island, that also had to return in CC - this time not as the dungeon entrance, but as a general decoration and theme for all screens, as we leaned into spookier enemies and room designs. Stalfos, spiders, and moths formed the backbone of the enemy layouts - we also wanted to have a presence of the undead on the island above too, connecting the overworld with the dungeon thematically.

We also took the eagle layout from the original and interpreted it into the themes as well, putting eagle statues in some of the rooms, which you can see above too. We also kept pretty faithful to the layout itself with the dungeon map, which is not something we'll always do with these dungeons - but felt appropriate here with how iconic this particular layout is and how it lended itself well to a lightly branching dungeon structure.

In Zelda 1, when you walk to the north west of where level 4 is located, you'll occasionally run into screens that feature armos statues. They are always arranged symmetrically and beneath some of them, secrets or hidden caves are located. Z1 also famously hid the Power Bracelet under one of the armoses and we want to recreate that in CC of course. We can't just have a major piece of equipment thrown about on the overworld though, so we must expand the world a bit again. The area with the armoses must be it's own landmark, and it must feature a mini dungeon for the Power Bracelet. How to go about this?

Given how armoses are statues, it makes sense to envision the areas where they appear as proper structures, man-built places where armoses are placed on purpose. So in an early interpretation, armoses were guardians placed in temple-like structures. One row of screens in an early remake looked like this:

You can see a sort of fortress that's built into the mountain. It's also kind of damaged. When Mitchfork made the first screen for this area, he wanted it to be the ruins of a fortress (rather than a temple), hence it is now the Fortress Ruins. This is what it looked like in CC originally:

Aside from the palette and campfire, the early concept is very much visible here. Later iterations (and that's what we are currently settled on) try to be less "generic ruins" and bring the "fortress" theme across more prominently. The "damaged" character is also preserved and expanded upon. Here's an intermediate version of this aesthetic:

...and here are final screens. One late addition was more townlike elements, making this a kind of outpost where people would have lived and not just a fortress. The mapping for this area is complete, but we'll save the whole thing for actual play. 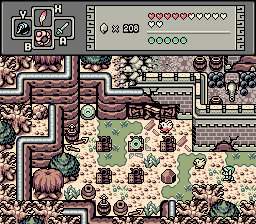 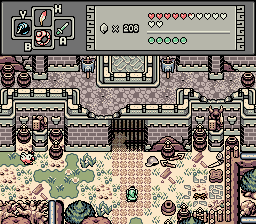 One of the things that we wanted to bring forward in an area like this is contrast between the "previously civilized" and "wild" areas of the world, so it made sense to make some additions to the mechanics and play as well. The Fortress Ruins has a much greater focus on hazards and overcoming tough enemies - like the Armos of course. So here, they're interpreted to be very heavily armored and can't be harmed or knocked back by many of your weapons (sort of like how the Gameboy games did originally). If you come here with just three hearts, the sword, and the candle, it can get pretty rough, since you have no way of damaging them directly. Luckily, interpreting this area as a fortress let us reinforce the theme with plenty of explosive armaments around to help pick up the slack. 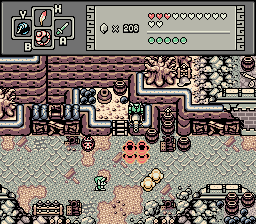 I love the bit about the fortress section. I can't think of many times people have attempted that aesthetic in Zelda Classic, much less pulled it off. The cannon-firing darknut is a very cool touch as well.

Curious to see how you plan to handle the top left corner of Z1's map. I don't see things in that area that could inspire any specific design.

Yeah, Death Mountain is late game, so it's not very developed conceptually yet, but we do have some ideas for it. We might lean more into our own ideas about the lore and world of CC to make that interesting, but I'll try to stay faithful to Zelda 1 one way or another. It might end up being one of the more loosely interpreted areas. Our take on the Lost Woods for instance, is a bit looser, too.

I love the logic and reasoning behind the environment decisions! I also have tried to follow that mindset with my overworld and I feel it makes playing in that world feel more natural and authentic. Cannot wait to venture deeper into this world!

So we were talking together about dungeon design, planning, etc. as I'm kind of gearing up for development on Level 3 - and I realized I had some stuff from the planning stages for L1 that I hadn't talked about before.  So it seemed like a good addition to this thread talking about the reinterpretation of certain spaces and such.
Here's a classic write-up on mapping out structures, focusing on Ocarina of time: https://garethrees.o...carina-of-time/
Zelda 1 dungeons are kind of well-known for not following these conventions.  Frequently the dungeon item is not required - or even usable at all - in the dungeon that it's found in.  In that way the Z1 dungeons are kind of unhelpful as templates if you intend to emphasize interactions between items and the environment or enemies. So when thinking about The Eagle and how it should be structured, I wanted to reference some other material, and it was natural to home in on the GBC Zelda games for this.
Here's a dungeon flow chart I made for Tail Cave, level 1 in Link's Awakening, along with a link to the actual map:

https://static.wikia...=20090812154203
As you can see, it actually begins quite open - the entire dungeon up to the center 6 rooms has no locked doors, which is over half of the dungeon.  They really wanted to let the player have some freedom to explore and have the experience of looking for the way forward.  They also make the dungeon navigation items, the compass and map, easily obtainable early in the dungeon to help tutorialize these and make them available for new players.  Finally, the Roc's Feather is found at a dead end - which emphasizes backtracking and teaches players that space can be recontextualized with additional verbs.
Here's what ended up being designed for Eagle's End, level 1 in Crucible Crest:

It's less open early on, but we made sure to allow the player some choices, and kept the compass/map available quite early.  We also left plenty of triggers for the bow around the dungeon before the item itself is available to seed the backtracking concept above.
While the room concepts and flow differ extensively from the original, we made sure to adapt a few elements - for example, the dungeon item, boss, and Triforce are all in the same locations, giving it some hooks back to The Eagle.  New elements, like the miniboss and Boss Key, were added to parts of the level that made the most sense - for instance, the encounter with Gohma needed to be:

So it only ever really made sense at the room in between the top of the wings.  Likewise, the boss key naturally fit into the west side of the dungeon, which was not required for progression in Z1.

To me, one of the most iconic parts of Zelda 1's Eagle is the opening three rooms, where you cannot go forward - you must go right or left to get the key (well, unless you use the exit/re-entry glitch I suppose).  This is one of those classic NES-era Nintendo tutorializations where it wordlessly, elegantly introduces a core concept. In this case, it's that sometimes exploring the dead-ends is necessary to advance the critical path.  This was important to recreate, so I made sure to include it - this time as the second screen, since the first was taken for a campfire.
One area that went pretty off the map in terms of recreation was the bosses, where we eschewed Aquamentus for Gohma and Mothula.  This was done in the name of sticking true to the gameplay and theming concepts - Gohma worked well since the bow was a clear gameplay answer to the problem, while Mothula themed  with the light/darkness aspects of the dungeon that was developed through the mini-moth enemies.  I also think that Mothula's movement pattern was able to emphasize the unique aspects of CC's bow implementation.  Aquamentus just didn't feel right for either of these - but of course we plan to include our take on the classic Z1 bosses in other dungeons.
Anyway, hope that this gives some insight into the choices we're making when adapting the underworld, too.