Screenshot of the Week 721

Another five great shots this week. Place your vote, and leave some feedback for the contestants. 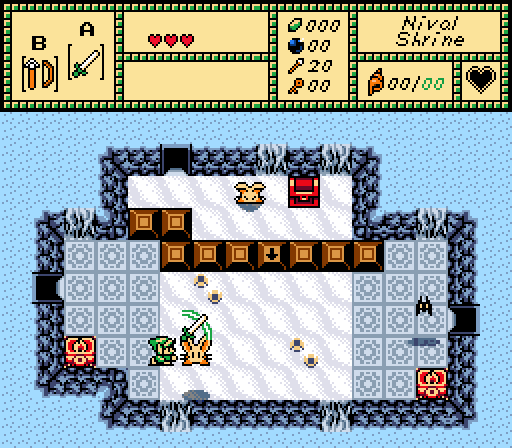 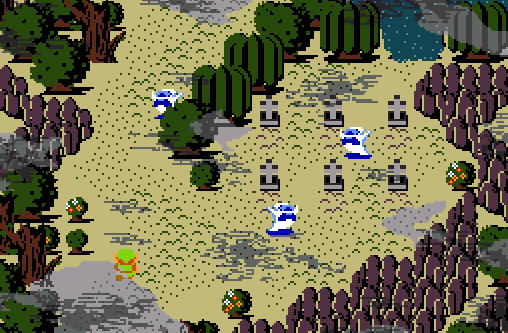 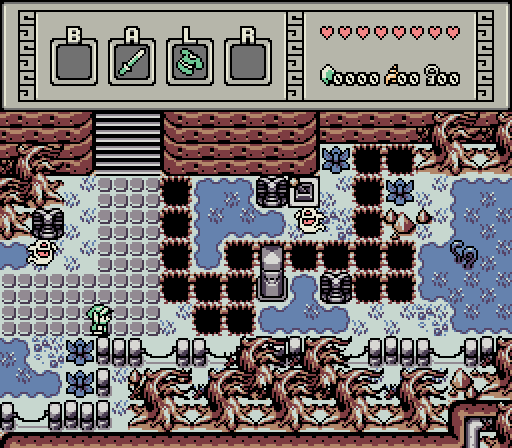 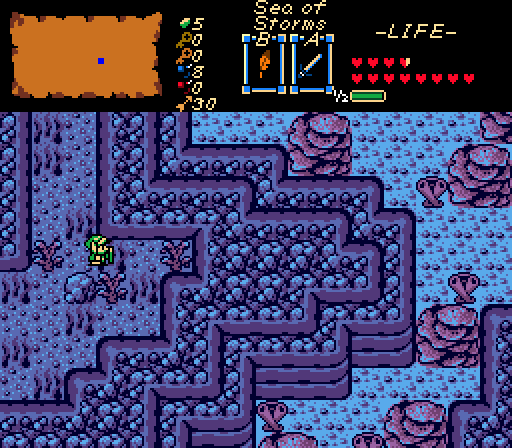 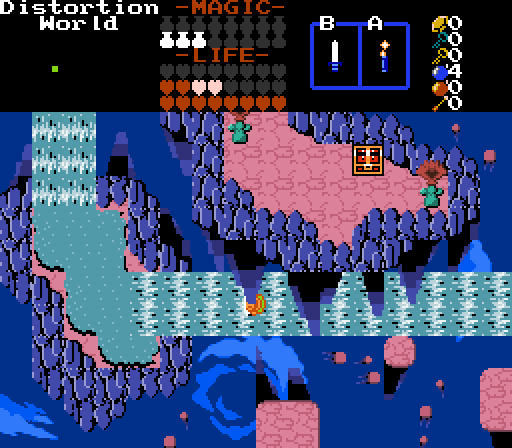 Link explores the strange and twisted landscape of the Distortion World.

Hey, so I'm gonna leave some feedback for a change.

Avaro: Nice solid screen, but a little boring for SOTW. The flowers growing on snow (sand?) looks a little weird too, but no biggie.

Shane: This one's not doing it for me, and it's hard to say why. Maybe because everything's a bit... erratic? The holes form some weird blob of a shape, the statues seem kind of randomly placed (are they hookshot targets maybe? Left and centre seem to make sense in that context, but not bottom-right). I think you need to figure out what you're trying to achieve on this screen and refine the design a bit more.

TheRock: (good name for your screenshot actually, given the massive chunk in the middle!) It took me a while to figure out what was going here, and I think it's because the high ground (on the left) has a darker floor than the low ground (on the right). This is the reverse of how people typically read screens (look at LttP dungeons for example - bright ceiling, dark lower floors), so unless there's a good reason for it I suggest swapping the floors. In terms of layout, there's a loooooot of wasted space. Does the mountain need to be so massive? You're squeezing all your playable space into little pockets around the edges of the screen when it should be front and centre.

Yoshot: Now that's something original! Don't think I've seen that in ZC before. Hope you do some M.C. Escher tricks with the world there! My only main criticism is the "stalactites" hanging off the "bottom" of the platforms. Artistically, the colour banding looks pretty bad, but that's ok. The bigger problem is that you're clearly going for the illusion of them hanging far down, blending into the sky as as distant things tend to do... but then you have a foreground element (the waterfall) going behind them. Even if the top platform is MORE forward, the stalactites should still be significantly more distant than the waterfall. So either put them behind the waterfall, or if they're NOT supposed to be huge things, don't blend them into the sky.

In conclusion, Joemacool had the best shot from an artistic/design perspective, but Yoshot delivered something cool and original (nice palette too) so that earned him/her my vote this time.

Why? (repeat question for all the other contest threads you posted in ^^)

I voted for Shane. It's just an overall great GB screen imo. The palette and subscreen are great, too.

Joel's shot is a good classic screen. I really like the ground details.

Avataro's shot is a solid dungeon screen. Though I think you should consider using a different tile for the snow. That one looks more like sand than snow. Other than that, it's pretty good.

As for TheRock, I agree with Noel that the mountain takes up too much of the screen.

Avaro - I love this screen. It looks like a great dungeon to play in! The flowers seem a bit odd, but you do need some detail in dungeons, I suppose! I especially love the doorways.
Joelmacool - So ominous. Another screen I'd love to play in.The detailing is done perfectly.
Shane - Voted here. Nice little puzzle. Love the colors, road tiles and detail tiles mostly.
TheRock - I like this screen, personally. I don't think there's too much mountain as others said. Sometimes you just need some dead space. If reworked a little bit, it looks like the right side of the screen could be explored as well!
Yoshot - Pokemon Platinum sure has an effect on you! I love this screen.Very interesting. I love the pink platforms, and the chest so close yet so far! Also a big fan of the Link tiles you used.

Avaro - Quite a bit of the area theme is shown in that one screen. It makes me want to see how the rest of the area looks.

Joelmacool - The fog effect blends well, and all the wood on the trees is a nice dark brown, as opposed to the blue or red classic tileset is known for.

Shane - Are those custom fences I see? I like how there is a graveyard feel with no graves needed.

TheRock - It is nice to see a screen that is more taking in the scenery than being full of gameplay. All it needs is a little more object variety on the sea floor itself.

Yoshot - A rather confusing screen for a confusing area. The bottomside of the floating landmasses line up just so that it looks like some tiles in the background are offset.

Also tagged with one or more of these keywords: Yoshot, Avaro, Joelmacool, Shane, TheRock