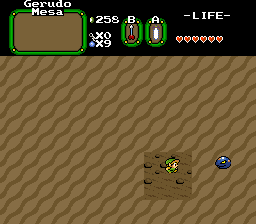 Overview Feature Quest
Information
Well, I'm finished ! It took me almost two months to complete . I'm open to any feedback, maybe some things I can do better on for future quests .

BE SURE TO DOWNLOAD THE MP3s IN THE DESCRIPTION .
< >

Description
Five relatively easy and short dungeons .
About an hour and a half of gameplay .
Includes MANY places and music from Legend of Zelda games .
Mostly storydriven, but doesn't contain too many directions .
An amazingly large and linear overworld .

Cleaned a few things up, etc.

Fixed update 1's level 4 bug .
Made gameplay smoother .
Fixed Mt. Headley's natural bridge bug .
Made fungus slashable .
Story
Link is sent by Zelda to take back the triforce of power from Ganon, who stole it from the royal family . Along the way, he will encounter many foes and trials created by Ganon ! Will Link be able save the land from evil once again ?
Tips & Cheats
1: There is a secret place in the desert canyon ...

2: Go to the notheast of the plateau, slash all the bushes, and look under the cloud .
Credits
Thanks to Teilyr for the tileset, Jared for the link tiles, Bayta for the title screen, and Bagu for the boss music . Thank you, everyone !

Edited 13 September 2020 - 03:47 AM
I don't think a quest genuinely ever caught me off guard and made me laugh for a full minute as this quest did (specifically the ending). I do think this quest has a weird charm to it both in humour and structure (the passage of time). The fact it entertained me through it is honestly why I gave it a five. That said, I want to touch base with some suggestions I have for the future! Keep at it, this is solid for your first quest!
No comments found!
Currently no topics are associated with this item.