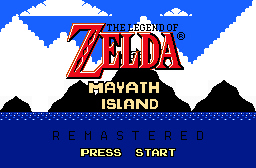 Description
Mayath Island Remastered is a game with many different areas to explore, dungeons to conquer, secrets to find, and a vast world to discover.
The game includes:
12+ hours of gameplay
Warping system
Challenging, complex dungeons

Update 1# Fixed a bug where you could use a key in the wrong place.
Update 2# Fixed the Desert palace boss so now you start in the right place if you die.
Update 3# Changed the bad ending so now the player doesn't lose their progress.
Update 4# Fixed the house music.
Update 5# Fixed a odd side warp that shouldn't be in Celestia.
Update 6# Fixed a screen in level 8 I thought I already fixed.
Update 7# Fixed a house in Snowbell City.
Update 8# Fixed 5 small bugs.
Update 9# Added a intro with Sans.
Update 10# Fixed where you can walk in the screen in level 6 with the boss door.
Update 11# Fixed a bug in the snow mountain where the player could skip some content.
Story
Play the game to find out!
Tips & Cheats
None.
Credits
The credits are at the end of the game.

Edited 20 July 2020 - 07:20 PM
I originally played Mayath Island back in 2016 - and didn't make it that far in the original quest, because I was both bored with the gameplay and frustrated by the disjointed storyline. I think I made it to level 3 or so before I completely lost interest in the formulaic and sloppily presented plot, as well as the bland screen and dungeon design. With that said, I don't have a whole lot of baseline to compare this remastered version to, but I will try.

First, the plot, NPC dialogue, most signs, and even some important hints are still presented in a very English-as-a-fourth-language sort of way. The bulk of the script has not been touched, so the storyline still comes across as very disjointed and in very broken English. I think the only script changes may be in the new dungeons, where there are some hints and event boxes that are more coherent. I do often tune out of the story when I play ZC quests, because let's face it, there are a lot of quests out there without much depth or originality in the story. In Mayath Island Remastered, as best as I can tell - because I was tuning out due to the broken English - the plot is pretty similar to Isle or Rebirth with the hero on a mysterious island. Our hero is guided to various objectives by a mysterious mentor, who might just have sinister intentions, and the quest does pretty well to show the player where to go.

The big, big improvement in MI:R is the dungeon and overworld design. Be prepared for lots of puzzles, multi-phase maps, item-trickery, and obstacles galore. One can easily spend several hours trying to complete some of the more complex dungeons. Being that two people designed the main and mini dungeons in this quest, all seem to flow together in a way that I would have sworn just one person designed all of the dungeons. Sans definitely improved his share of the dungeons from what I recall of the original Mayath Island, and The Rock's work is solid as what I expected from playing his other quests. Unfortunately, one big thing that is lacking is the total lack of spacebar map in dungeons and mini dungeons. This isn't much of a problem on the mini-dungeons and earlier main dungeons, because the maps are small, but becomes a problem in the large maps of level 4 and then 7-9. Be prepared to be going around in circles a lot, and forgetting where you've already been, unless your short-term memory is hero-like. I get it, the spacebar map is going to look weird and buggy due to the complexity of the dungeons. One alternative might be a detailed mini-map, but I have no clue about the technical requirements to implement such a change.

There are some very interesting items and associated gimmicks in MI:R which I haven't seen often before - or at all. The arrow of light is a great and novel concept that works very well. The kanui (sp?) is something I've seen before, but is well implemented as well. On the other hand, I did not like the deku leaf and its associated puzzles at all. Using the deku leaf and doing associated jump puzzles requires a lot of going into the subscreen to switch back and fourth between the leaf and the roc's feather, which gets very tiresome. The jumping puzzles were also an unpleasant chore - mainly because the whirlwind/spring tiles are so sensitive that there is very, very little room for error for landing. Most of these jumping puzzles also need to be done at least twice by the player, for instance, a certain jumping puzzle on the 2nd floor of level 7; it would be a great idea to put a switch at the end of the puzzle which would allow the player a shortcut after completing the puzzle for the first time.

The combat and accordant challenge in MI:R is very well balanced. There is a good progression of difficulty, without any spikes, and until the end, where it is possible to get the L-4 tunic and L-3 sword, it's pretty easy to die if the player is careless. Mini and main boss fights are challenging without requiring luck or avoiding damage at all costs, wherein most challenge quests and quests in the higher difficulty modes sadly tend to go for the former. The bosses and mini bosses in MI:R require a lot of dodging and careful strikes, and do tend to utilize a lot of "bullet hell" type attacks, but won't kill the player in 3 hits like some unfair examples in challenge quests that we have all seen. My only complaint about the combat is that sometimes the boss fights are a little protracted and some bosses have big HP, but a lot of this can be mitigated by exploring and finding good defense, offense, and health upgrades.

I do have to say the real challenge in MI:R lies in navigating dungeons and to a lesser extend the overworld. The player will have to think and probably take notes while playing - like I did. I wouldn't go so far as to call this a puzzle quest, because the puzzles aren't that hard and don't kill the pacing of the dungeons, but there are a lot of puzzles to navigate. Usually, this theme is executed in an excellent manner, but there are one or two exceptions, such as the "Twieves Hideout," where some screens are downright unfair and seem to be based on luck in order to complete. I have to admit, I was dismayed when I learned that
Spoiler
it isn't even necessary to enter the hideout in order to advance the story: the only prize in this mini dungeon is maze directions.

Another big con is the fact that the deku leaf is a broken item, and I don't just mean in relation to the jumping puzzles I have already talked about.
Spoiler
I mean with careful screen placement and a little skill, the deku leaf can allow the player to completely go over single blocks and thus bypass pegs and keyblocks
The deku leaf can easily lead to the player getting stuck in walls and necessitating an F6-continue. I see there are a number of bugs that have been fixed, in relation to the deku leaf allowing the player to reach switches prematurely, but believe me, there are still a whole lot of places where one can still exploit the leaf to skip obstacles and make a shortcut. I believe the only way to fix this problem is to recode the deku leaf. On the other hand, I have to wonder how many instances where I exploited the deku leaf, that was, in fact, the intended solution. If so, that would be a new level of design genius or design laziness - depending on perspective.

In summary, I had a good 22 hours of gameplay in MI:R and would play again. My enjoyment of the quest is purely because I like the screen design, maps, dungeons, and gameplay. These things redeem a plot and storyline that is presented in broken English and thus, quite hard to follow along with. 4.5 stars/5 - rounded up to 5.

Posted 05 July 2020 - 12:26 PM
Overall, I thought this was a pretty good, but somewhat frustrating at times quest. It has a nice Link's Awakening atmosphere, which was evident by the tile sets and some of the music. One thing that does detract from this quest is the myriad of spelling and grammatical mistakes in the text, but I would recommend others to play this quest.

Specifics
Spoiler
Major likes:
- The music: Really liked the varied selections featured throughout. I fell in love with the music for Level 9 when I first saw it in "To the Top" so I was ecstatic that it was used here.
- Level 9: Felt like a true level 9 with all of the objectives you needed to accomplish - very fun.
- The overall quest: for the most part felt very structured and well put together

Major dislikes:
- The stealth sequences: They were VERY frustrating, not enjoyable, and were the prime reason why the 5th star was lost.
- Level 6: I spent way more time in that level because of 2 factors: 1) The boomerang switch to open the way forward to a keyblock (see my posts in the help topic) is barely visible on the screen 2) There is a skeleton guy in one of the rooms when the water is lowered who alludes to the fact that you have to accomplish some objective to pass
- The spelling and grammatical mistakes: overall, one can understand the high-level story, but the disjoint text prevents one from being immersed in the story

Bugs discovered:
- Possible to use the forest temple key in the keyrock under the house in Beach City (this one has been fixed, I believe)
- In the large house in Chinag City with two books, even though the book on the right did reveal an invisible path, you are blocked from getting on the path
- In one house in Snowballs City, you have to push a column to reveal a stairway, but going down this stairway leads you to an undefined screen where you are stuck and must reset
- In Level 6, when taking the shortcut to the boss, you can walk into a portion of the southern wall, but you are not able to get into the main portion of the room unless you have hit the switch to lower the barriers