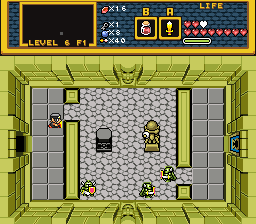 Overview Feature Quest
Information
Imagine if you will, a quest about a day younger than publicly released ZQuest itself. Sitting on old servers, in a silent decay. Seven years ago I decided to dust it off and see if something could be made of it. What comes today is the result of it all.
< >

Description
This quest is not my own. Many people from many walks of life contributed to its development. From my cousin, who originally decided that there should be a knight like character in place of Link, to Joki who planned a great portion of the dungeons. Contributions poured in from many people as I was working on it. People held on to the original file as I carelessly switched computers. Some were even so kind as to stream the quest during expos and offer much needed feedback. I can take credit only for being the primary constructor of the quest.

There are 10 Dungeons and 4 Bonus Dungeons.

To play with enhanced music, grab the music from the following link:
https://drive.google...Pbl248EJo41S0yC

1.Cleaned up some flaws and errors in the final dungeon.
2.Fixed the bug where you couldn't get the ruby.
3.Added pickup strings to items that didn't have them.

1.You now start with twice as much magic.
2.The magic and heart container room is replaced with a Heart Container Piece room.
3.Three new Heart Container Pieces have been added.
4.The third Gem, which was previously unobtainable, is now obtainable.
5.Several fixes to strings.
6.Title Screen no longer gives EX1 hint (In order to look cleaner. The function still works, and will remain mentioned in 'Tips and Cheats')
7.Because of the balance changes, you are required to start in this version as the minimum version! If you have made significant progress,
or don't want to reset the game, you do not necessarily have to download this. This is just to make the game a little cleaner and fix a rather major problem.
Story
At the outset of Hyrule, there were three Goddesses. Din, Farore, and Nayru. The Triforce was the culmination of their essences.The Triforce itself was alive, and could see its very grim future. In order to preserve itself, it created an avatar, a Knight of incredible power. The Triforce Knight was given Free Will, but a strong sense of responsibility. Link has journeyed far away, Zelda is sealed, and Ganon runs amok. Hyrule hangs in the balance for his quest to restore the Triforce to unity.
Tips & Cheats
Pressing EX1 at the title screen will start you with more health and the training tunic. Additionally, all shops will be half off.
Credits
Story/Quest Construction:
BigJoe

Posted 24 May 2020 - 12:26 PM
Just finished this up and it was quite an enjoyable quest! It took me about 21 hours and 24 deaths to beat it so I'd say that was quite a ride. To start off with, I really like the dungeon romper style of the quest, the dungeons were all mostly really fun (save for the last two, which I'll talk about later) and the overworld was really cool! The difficulty curve was fairly fine, nothing felt too difficult or too easy for the majority of the quest and the side content provided was quite rewarding. The dungeon ideas and concepts were all mostly quite creative and I really like the design of a lot of them. For whatever reason, this quest gave me a lot of old school BS Zelda quest vibes that I would expect to see ~10 years ago or so, so the tileset itself felt quite nostalgic to me lol.

Now to quickly go over the stuff I didn't like, which is more of the very end of the quest. I feel Levels 8 and 9 were my least favourites of them all as they both have their own issues IMO. For Level 8, the premise of the dungeon is pretty interesting, with the moving blocks everywhere and all. However, the one thing that really killed it for me were the Wallmasters. They were incredibly frustrating to kill since they take so many hits, and since so many were packed together in some rooms it made navigation quite difficult sometimes. There were many times where I accidentally ran into one to escape from others. This made the dungeon become an absolute drag. As a suggestion, I would personally say to limit wallmasters to just simply one per room to make things far more manageable and not frustrating. The same threat will still be there to some extent, but all the frustration would be gone since there's only one you have to worry about. In regards to Level 9 (which I assume to be the Pyramid), the entire dungeon itself felt quite lacking and rushed. I think the biggest problem is that the dungeon is far too big for its own good, and so there seemed to be a ton of filler screens. The dungeon design itself was quite bland and samey compared to all the previous dungeons which would have some sort of distinct design style. For this dungeon, a large majority of the rooms were just empty screens with maybe some statues and stairs scattered here and there, and some rooms with some sort of block design, but generally it was all very empty and so it gave me the impression that it was rushed out. It probably wouldn't be worth the effort to redesign the dungeon at this point to shorten things a little, but adding some more detail and some sort of design would go a long way for this place. One last thing, I really disliked having to kill those Goriya-Wizzrobe enemies over and over. It probably would've been better if they never returned after death or if the barriers disappeared permanently. This made the dungeon drag on a bit to an otherwise already massive dungeon. That's about the two major points I wanted to bring up.

As for smaller things, I compiled a list of weird stuff I came across in this imgur album here. I realise the quest was updated recently so if there's anything here that's already been fixed up then you can just ignore it.

And one last question since I couldn't seem to figure it out, how do I even get anywhere in Level 10? I can only go as far as the entrance room. I thought by beating the game something would open up, but it doesn't seem like that worked, so that is just a mystery to me right now.

With all things considered though, I had quite a bit of fun playing this quest. The quest needs a little more polish in some places, and sadly the end portions of the quest didn't sit too well with me. But otherwise it was still quite a great quest. I'm gonna give this one a solid 4/5. Pretty nice work overall!

Edited 21 October 2019 - 05:19 PM
This is an awesome game, i tried the Original version long ago and i like the new Overworld theme in this one.
There is an Optional Easy mode where you take less damage from monsters now.

Edited 26 December 2019 - 05:10 PM
I'm stuck at the symbol/color puzzle in the sewer. I found the clue room but using the colors in that order still isn't working?http://ZELDA.jpg Anyone know how to do this?

We're going to need to rework a few things BigJoe... but I've already discorded with you about this...