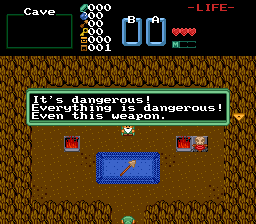 Overview Feature Quest
Information
A huge quest filled with lots of items, dungeons, and randomness. Plenty of options for the scale and difficulty of a playthrough. Adapt to the items available, dungeon locations, and travel between worlds.

This quest makes use of the Ex buttons, especially Ex3 and Ex4. Be sure you have them set before playing.

Description
Randomizer Omega is the finale in a long line of Randomizer quests. It sticks to the Zelda 1 style, but now with nearly everything from previous quests combined with new features.

For those unfamiliar, a Randomizer takes a base world, and shuffles things like items around, so you don't know what you'll find where. Randomizers often come with an option to enter a seed, which will produce the same results if entered the same. This randomizes both where each cave goes on an overworld, and item locations. In addition, there are options to vary the length. There are multiple overworlds you can start in, and searching around will find warps between them.

Although the overworlds and dungeons may be Zelda 1 styled, there area lot of quality of life features that make it feel much more advanced. Compasses give a tone if killing all enemies drops an important item. You can track where each cave goes on the overworld, and also see progress on collecting all items in the current area. A Fortune Teller can reveal important locations like dungeons on the map, but you'll need to keep paying to reveal more. Secrets are far more obvious than those in Zelda 1. Dungeon doors are custom, removing issues like suction from bombed walls, and fake walls expect Lens of Truth to find them.

There are up to 4 Owerworlds and 16 sets of 9 dungeons. Options can control how many overworlds you can travel between, the number of dungeon sets located in each, and how the dungeons are placed and distributed between the worlds. There are even a few options to generate a world similar to past randomizers.

There are hundreds of items you can obtain. The actual total number of items varies from length or options regarding Heart Pieces, but you can have a total over 500.

Each overworld has its own set of Triforce Pieces linked to it, and all Level 9s in that world need all 8 of those pieces to enter. You will only find those pieces in the world they belong in, traveling to different worlds will reveal different pieces.

The final goal is to defeat Ganon and rescue Zelda. His true location is unknown, but looking around and clearing those Level 9s may give the clues needed to find him.
Story
Ganon has taken Zelda to his Tower, you need to rescue her. However, you don't know what to expect along the way. Not even the world you come from stays the same. Perhaps by overcoming countless monsters, rupee stealing Old Men, hungry Goriyas, lazy toll-keeping minions, and Ganon's best minions, will you reach your goal.
Tips & Cheats
A lot of the clues given by NPCs can be useful. On a first play, you may want to keep those hints normal, and read them all.

The Ex 3 and 4 buttons bring up some special menus. The map shows where all the caves in the current overworld go, and you can use A and B to change the color of them, for a personalized tracking system. The weapon menu lets you pick which 18 items can be cycled between in the normal inventory, and some special weapons come in multiple variations that you can switch between in this menu. You can also do a sort to pick the 18 highest leveled weapons owned, and even choose to sort based on their type.

If you choose to play with multiple overworlds, pay attention to which one you start in. Not only will you restart here if you save in quit in any overworld, but a lot of useful early items, plus something else important, will appear in this world. You will need to explore other worlds, and sooner depending on the difficulty chosen.

Enemies get more difficult as the level number increases. It is worth sticking to the early levels for a while until you have a lot of useful exploration items, a decent weapon, and some more life before doing the late ones.

Once you know where the true Final Dungeon is, note you can get there really early, without completing a single level 9.

In the starting cave, you can toggle if items have a description when picked up. You can also use the training dummy to test the strength of the weapons you've got.

All Pols Voice have a secret weakness. It is never the Sword or Sword Beams, those just do normal damage.

Every overworld has a cave where you can get one of those major shop items for free. You may want to find this before buying out every shop.

In very long lengths, you may encounter P Bags. These just give you rupees and ammo, as there are more locations for items to appear than the total items.

I totally wouldn't drop multiple hints about bonus content. Not at all.
Credits
Nintendo for the 1st and 2nd quests, as well as BS Zelda

DragonDePlato for the original Koten Tileset

GameMakr24 for the Outlands hack

VG Music for all the various midis

The beta testers who found bugs and gave feedback across all Randomizer quests, leading up to this

Posted 27 September 2019 - 03:36 PM
I've been looking forward to this one for quite a while so I was pretty pleased to see this finally released. Managed to get started on it about 3 weeks ago and just finished it up today. Final results here for max settings: 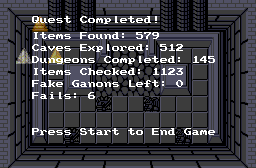 If I had missed anything then I'll probably go back and find it. Not sure if there was any bonus content this time round, couldn't seem to find it anywhere. Overall though, this was a very fun quest. For whatever reason, these kind of quests appeal to me a lot so I never found a point where I lost interest. The constant dungeon crawling was great and the new dungeons were pretty fun to go through.

I can't really think of any major negatives for this quest, but some of the Level 9 dungeons were quite a pain to go through (Chest, T-Bird and Dice come to mind). I think the reason for those is because so many rooms in the dungeon weren't on the map and so it became a nuisance to try and navigate when the majority of the rooms weren't marked on the map.

Other than that though, this is a very well made quest. Easy 5/5 from me. Looking forward to seeing what else you got coming up!

Posted 27 July 2019 - 04:47 AM
Can anyone please help me out ie done every single dungeon by now doing all level 9's but whats with the start screen in each level 9 there is a staircase if you look trough the lens but how to open it i used everything on it still doesnt open up ... a little help would be great

Posted 06 July 2019 - 09:08 AM
I can't figure out how to complete level 4 Mouse.
on the left square in the right ear there's an unopenable shutter leading up to a boss key which i can see but not reach from the top right room in the right ear because its a split room with 2 blocks i cant push keeping me away from the key.

Found a minor bug. In the Flame Dungeon, one set of one-way walls (Imgur link with the exact rooms: https://i.imgur.com/RNG2vAk.png) doesn't work properly. You can walk through it on the 'entrance' side, but then can't leave it on the 'exit' side. Luckily you can still walk back rather than being stuck, but yeah,

PS: I call it a minor bug because the level is still completely finishable even with that wall bugged.

Posted 29 June 2019 - 06:34 PM
Question: If I want to minimize the number of P-Bags that I get while still obtaining the best version of every possible item, what's the absolute fewest number of overworlds and dungeons per that I need to populate?