Greetings PureZC! I've been putting some time into zquest, and with a week's worth of mapping work ahead of me, a demo release is imminent. Come with me on a tour of the edge of the world: we're off to gather up a big old pile of them bones (high resolution map) in the Bone Zone. The playable area of the demo should encompass the entirety of the southern map and the western half of the Northern map. Dungeon items for dungeons 1 and 2 will be available in a well-hidden location to facilitate the very few item gates I have planned out: i'm shooting for ~75-80% of the game to be completely open; but I do want a little sense of progression that comes with light gating.

For this teaser I'll be going over some techniques and design notes so you all have an idea of what to expect.

When I started the project, I found myself limited by the lack of palette options that looked good on the overworld (Basically 0 for snow, 1 for autumn, 6 for generic greens, 11 for rockfaces). I think that I managed to get a good run out of the autumn aesthetic for my opening areas using just the default palettes, but what was there just wouldn't cut it if I wanted to avoid falling into the boring standard Zelda design tropes (This is a forest, it is green, it has many trees, there is a forest temple here; this is a lake, it is blue, there are less trees than the forest, zoras try to ventilate you with their breath, there is a water temple, ad inf.) I tried to pack all of the most traditional Zelda design stuff into the bottom left corner of the map just to get that out of the way; you all have done it before, I've done it before, I won't make you do it yet again.

As part of my design process I have been going through movies, art prints and my record collection on a quest for images that would provide useful sources for color palettes, and then designing a template screen establishing a visual language for how that palette would be used in Zquest, and finally building out the map from those test screens. I've started work on some stuff derived from Mamoru Oshii's Angel's Egg, and Richard Elfman's The Forbidden Zone; but as far as the demo is concerned, we'll be focusing on 2 areas inspired by the vibes and colors of some classic albums. 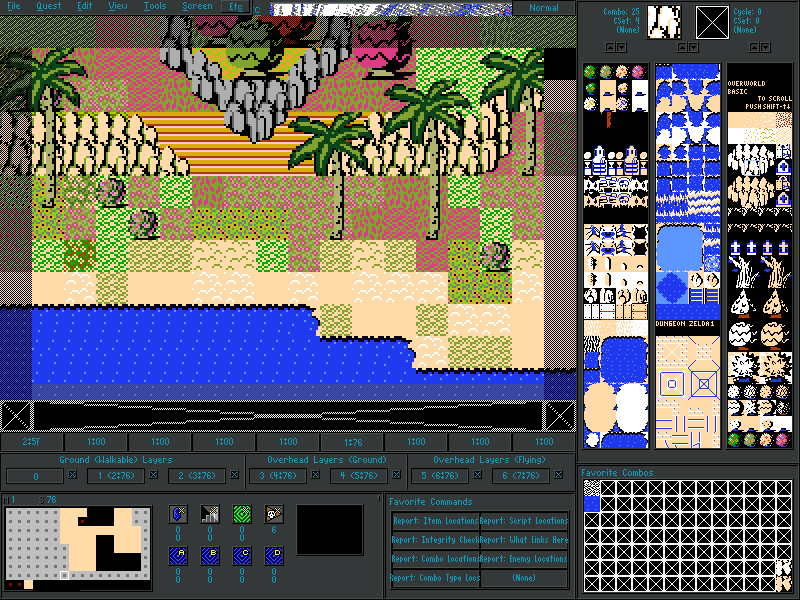 Grab your best girl, hop in your Ferrari Testarossa Spider, and come vibe on this beach with me. 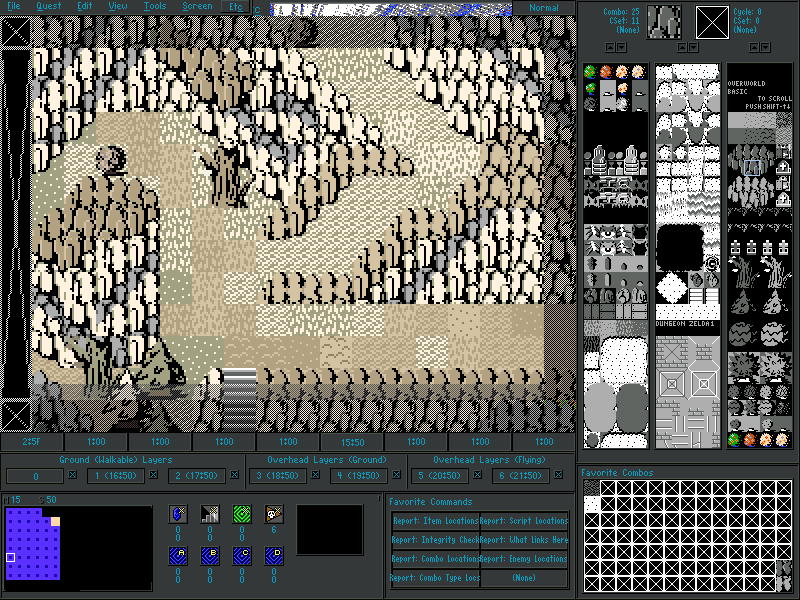 I've been working on a layering technique for classic mountain tiles: while the shape of the tiles themselves suggest a vague topography, getting any sense of depth out of them can be a pain. From what I've seen, most people opt for creating a color gradient where darker colors signify a lower elevation, and lighter colors a higher one. I've opted out of the gradient color ramp scheme and have started experimenting with layering corner cliff tiles that match the primary color of the clif on layers 1+2, surrounding a mountain tile set to a highlight color on layer 0. With this scheme, you can have your sheer edges maintain a single color, and get a sense of depth, both elevation and z-axis. I'll be retrofitting earlier map screens using this technique if I don't decide I absolutely hate it; it can be tedious, and your layer maps start to look inscrutable after a while.

----
What's next? Overworld Demo 2 -lay your heart down onto the sea of stars-

Beyond the eastern edge of the world lies a limitless void...

I've amassed a library of high-resolution satellite telescope images of the grandest cosmic bodies and done what any rational, sane person would do with them: downscaled them to absurdly-low resolutions, indexed them to 6 colors, and dumped them into Zelda Classic. Expect floating asteroids, labyrinthian abstract freeform structures, an homage to Unreal Tournament 99's ][ Worlds, and... Mobile Suit Armos, featuring a boss battle within my dialogue system. The sea of stars will have more of an abstract nightmare flavor to it, so don't expect me to make the hard sci-fi Revelation Space video game I've always dreamt of making, because it's not happening here.

Thanks for parsing through my TED Talk; I have a ton of ideas for this quest, and most of them should be able to be done without any scripting, thus they are within my realm of expertise. The ZQuest landscape has completely changed in the last decade and a half, and natively supported scripts seems to be a huge part of quest-making now. I am worried about falling behind the technology curve as far as presentation goes. I know how to do a lot of things but programming is not one of them: I may be out on the corner begging for scripts before too long, but not before I take a crack at it myself. My goal was to set out to make a Zelda Classic game that people would actually enjoy playing; I feel like maybe I have gotten a little ambitious for my first foray into ZQ in 15 years, and my first (published) quest in that time, but damnit I'll try to make it work. Look forward to more progress PureZC!

This overworld is coming together really nicely, and I'm a big fan of your approach to designing it. That space background especially resonates with me.

I gotta second Moosh here, the overworld looks super nice. I love the creativity you put into this. Good inspirations, too.

The ever-expanding universe...
Quick map update as of: