Welcome to this Dream...


5 replies to this topic

Do you have dreams of a distant destination?
In this quest, you leave your safe haven to discover a wide world of wonder.
There are so many ways to go, and none seem to be the right choice.
Will you ever be safe?


There is a lot to see and do in this quest. Level up by spending Exp. Find and try out lots of weapons.
Explore a large number of different areas. What will you find? What will you do?

A few points of useful advice. Make sure you can use the Ex3 and Ex4 buttons in your controls. You'll be using them.
Some weapons react to being aimed diagonally or holding down the attack button. Play around a bit to see what you like.
For those who want to play this blind with minimum spoilers, don't read any further.

There are a LOT of mechanics in this quest that are unique. I'll try to give an overview of all of them here.

First off, your playable character.
In the quest options, you can choose between making a character, having a pick from a list of randomly generated characters,
or choosing from a number of pre-built characters.

You can choose how your playable character looks. There are a lot of different options, and can even get a random appearance.
After picking an appearance, you get a choice of classes. These are divided into Melee, Ranged, Magical, and Balanced.
A class determines your Life and Magic Rates, Weapon of Choice, and Level Up Skills.

Choose a randomly generated character. This is not only how your character looks, but also it's Life and Magic Rates, Weapon of Choice, and Level Up Skills.

SPECIAL: If you F6 Continue on the class or character selections, you can go back to the main quest menu with your options saved and change them as you like. Or change the seed to get different classes or random character choices.

Choose one of many characters with pre-set appearances, Life and Magic Rates, Weapons of Choice, and Level Up Skills.
However, these characters may have significance in this world, and the story makes it clear playing as them is non-canon.

SPECIAL: Pressing MAP will randomly scroll to one of these premade characters, if you want SOME randomness.

TECHNICAL: Life starts at 50, Magic 45. The initial stats are these values plus the character's rates.
Life Rate goes from 6 to 14, Magic Rate goes from 3 to 11. These two rates will total 16, 17, or 18.
Leveling up Life or Magic adds the Rate * 2, while the Life or Magic Increase adds just the Rate.
As such, imagine the initial Life and Magic at Level 1, each level up is Level + 2, and each increase + 1.

Characters have a third stat called ammo. Ranged weapons use ammo, and you can see the ammo meter represent the current amount of ammo on hand for using these weapons. Think of it as having the materials on hand to throw or drop the weapon.
Ammo does not get leveled up, instead you can find Ammo Increases. However, characters have different rates of Ammo recharge.
This is a hidden third Stat Rate, which is dependent the total of the Life and Magic Rates.

Killing enemies gives Exp. You can have up to 999 Exp, and you lose a little if you are defeated. You don't automatically Level Up. Instead, you bring up the Level Up menu with Ex 3. This is very similar to leveling in Zelda 2. Spend Exp to level up one of four different categories.
Level Up Life and Magic to increase your Life and Magic totals.
Level Up Skill to obtain a new Weapon Skill. More on these below.
Level Up Armor to reduce damage taken. This is done in increments of 5%, and you can find Defense Upgrade items to eventually reach 50% damage reduction.
Maxing out every category puts you at Level 29... just like the 29 Contest this was initially made for.

Characters have seven Weapon Skills, obtained by leveling up Skill.
These skills will apply either a 25% Cost reduction or a 25% damage increase.
These skills apply to all weapons of the displayed Weapon Type, and also stack.
You can check the types of a Weapon in the Weapon Select Menu.
There are 30 different weapon types... what will your character be good with?

Every Character has a favorite Weapon, known as a Weapon of Choice.
The Weapon of Choice gets a 25% Cost reduction specific to it, which stacks with other Weapon Skills.
A weapon with no cost instead gets a small damage bonus.
This bonus is available right away, assuming you can find said weapon.
You can choose to disable this bonus in Quest Options, or choose to make the very first item be this weapon.

There are a lot of weapons to find. You have six action slots to assign these weapons to: A, B, L, R, Ex 1, and Ex 2.
Open up the Weapon Select Menu with Ex 4. Then hover over a weapon to see it's damage, cost, and weapon types.
You then assign the weapon to the desired slot. You can have the same weapon assigned to multiple slots if you want.
Every weapon has three levels of power. These go 100%, 150%, and 200% damage, plus some other upgrades.
There are 160 different weapons to find in the current version.

There are a few other passive upgrades you can get. The ability to Push blocks and the Gauntlets are pretty obvious what they do.
Charge Rings lower the time to charge some weapons by 25% and 50%.
Bubble Jinxes are replaced with a Poison status, and there are items to reduce and prevent the poison durations.
Shield Upgrades grant the ability to block some projectiles from the front. Higher level upgrades vary from character to character.

To help you, along the way you'll find Safe Spots. These act as checkpoints, and you'll restart at the last one touched after defeat or the F6 menu.
There are also some useful notes along the way. A book on a gold pedestal will give a clue about a mechanic in the quest. These may appear multiple times, since there are a lot of different ways to explore.

Enemies can have a variety of weaknesses and resistances. Try out different weapons if one seems to be doing poorly.

The current demo is far from complete, and has no final area or ending. Instead, it's more a way to preiview what's to come, and play around with these new machanics.
If you want a goal, try for 202 items colelcted. Bosses are the biggest placeholder right now, I have ideas for them, but a lot needed to make them work.

There are a few more quest options to mention.
You can make enemies and bosses have higher or lower stats. This does not change the amount of exp they give.
The other Exp options adjust the level up costs, but are generally lower than the default.

Of course, I plan for randomization options as the quest development continues. In fact, there are really basic version of randomizers already in.
The item randomizer can allow you to obtain weapons and items not currently placed in the normal quest. This allows 204 items collected, due to a specific key item being randomly placed.
The warp randomizer is also really basic. It only runs if the item rando is also enabled.
Should you choose the more complex option... lets just say you can look into the void of all the incomplete areas planned, and maybe see something else that will be expanded upon.

At the moment, the most recent demo is half the total planned areas.

For now, development is in 2.53, release 2 (release 3 soon).
However, 2.55 versions offer some expaned features this weapon system would benefit from.
Given the lack of concerns voiced, I may move on to 2.55 versions soon, and try to keep up with the current PureZC releases.

Most feedback from the 29 Contest version has been incorporated.
I've been suggested to add a custom map for tracking, and am looking into changing the custom menu system a little.
I have no plans on removing the normal ZC subscreen though, as it acts as a more stable "pause" than the other menus do.
I want to add a few more options to character appearance, namely more hairstyles.
Weapons and areas are prone to change over time.
Some premade characters may have their Weapon of Choice change to new weapons when they are added.
The weapon placement in the Weapon Select Menu will change as more weapons are inserted into it.
And of course, and good suggestions can be added later on.

So Will This Be Extended in The Future

Lastly I Found 100 Treasures in Total

Submitted a new demo, and updated the information above.

This gets the quest up to a sort-of half way point, with all the early areas completed now, and a few more complex mid-game areas now exist. I tend to add an equal number of outside and inside areas at a time, as the quest design kinda relies on an equal number of in - out connections. The next inside areas I'll make will be the first few of the late-game difficulty, while there are plenty more complex mid-game outside areas to develop.

The weapon count has been increased, and a few weapons have changed slightly. The most widespread change is to weapons with an "ice burst" effect, as the burst is faster.

Playing around a bit, I shifted the difficulty. Normal is now Easy, Hard is now Normal, etc. The highest difficulty has a few minor quirks to make it more challenging. Bosses are still placeholders, and have been adjusted slightly to reflect the difficulty shift.

Special thanks to Shane and Lunaria for the various gameboy-style tilesets they have released, some of their tiles have been incorporated into the latest demo. Someone else also gets a special thanks for their tileset, but that one is a surprise.

With more areas and weapons, the normal item locations have been changed a little. You can obtain Level 1 of every Weapon now, with some Level 2 Weapons also available. There are still 2 locations you can't reach, as Flippers are not available yet.

The item randomizer no longer places the same key items, instead picking weapons with key item traits. You may need to play around with weapons to figure out which ones cut bushes for example. It also tries to place each weapon once, but some may not appear while others can get upgraded to Level 3 easily.

As mentioned above, the quest is now compiled and developed in 2.53 Release 2, with plans to shift to Release 3 soon. However, given 2.55 has been in development for some time and is starting to look more stable, as well as having some appealing options, I might jump straight to a 2.55 build in the near future.

I don't plan on another demo as soon as this one, besides looking at what 2.55 has to offer, I'm thinking of making some adjustments to the tileset to better incorporate the tiles from VD and ST for future use. In addition, I've got some weapon ideas that could end up being "new" key item types, and a few steps toward proper randomizer logic that I may be working on soon. Bosses are still in a weird place, I have some ideas, but nothing I expect to have working soon.

Discussion on ideas is welcome and encouraged. Not to mention showing off any ridiculous random characters you've ended up with. 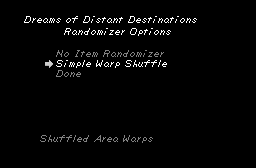 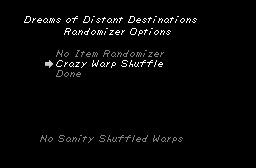 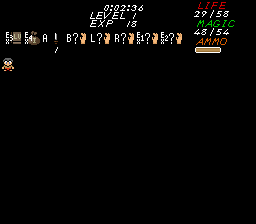 I AM STUCK IT i cant play

Good catch. Next version will add a message that makes it clear Warp Rando only occurs if the Item Rando is also enabled, and disable all Warp Rando effects properly.