Ideas, concepts and maps for a Z1 Quest

So, ever since 2013/14ish I have been pondering the idea of making a Gameboy Color Zelda 1 remake (I've also played this through with the Newfirst tileset, with Z3 graphics and with BS Zelda sprites but this post here is about the Gameboy Zelda inspired project). The ideas for this project have been going through countless stages - so much that I don't particularly care to recall the details. Here is some very early map I made with the BS Zelda layout in mind: 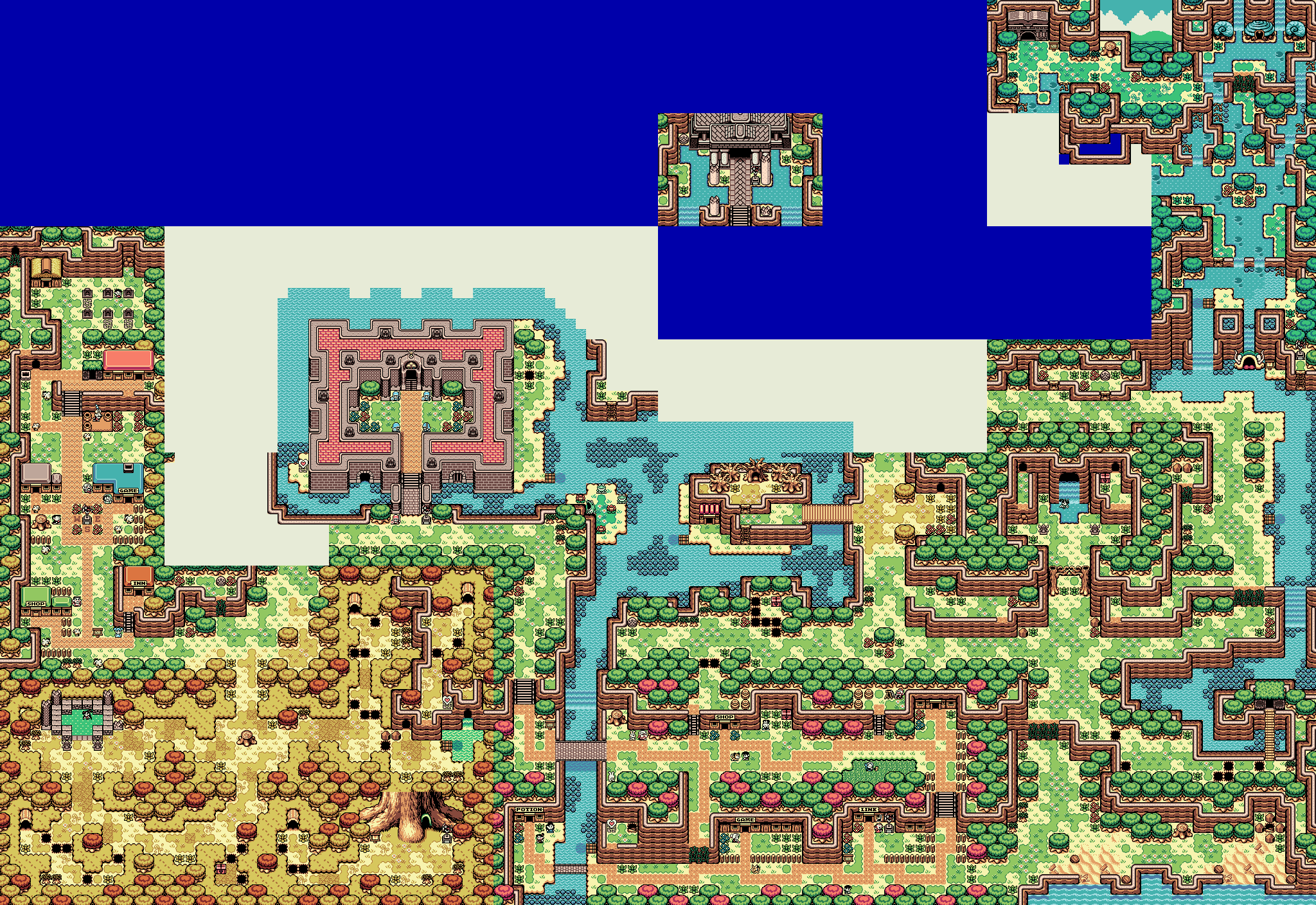 A couple of weeks ago I have taken this direction up again (using the Vintage Dreams tileset/"engine") this time however with the big 16x8 Zelda 1 Hyrule for reference. Here are a couple screenshots: 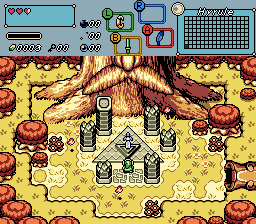 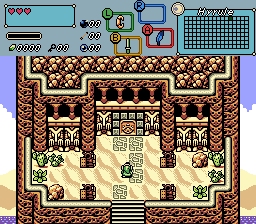 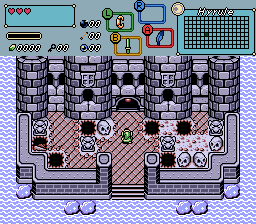 As for the tiltlescreen, I have something like this in mind - simple and kind of retro and such: 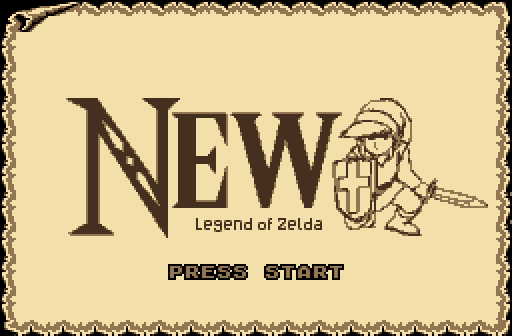 As for the dungeons I thought that instead of Trifoce Shards Link will find "essences" as in the Oracle games, those being 'The Eagle', 'The Moon', 'The Clover' (instead of the Manji which looks all too much like Nazi iconography), 'The Snake', 'The Lizard', 'The Dragon', 'The Demon' and 'The Lion'. Here are the sprites I made for them:

I haven't started working on interiors yet and I've hardly set up any enemies or other interactive gameplay elements, but here's the current progress on the overworld:

To my mind the Zelda 1 map divides into 8 to 9 areas somewhat like this:

This is kind of what I had in mind when mapping the way I did.

So, mostly I just want to share what I have been working on but I don't feel as commited as to open a project page about it because I already feel like I diverge too far from the original and kind of think that I should reconsider the direction I am taking with this. What do you think about adding elements from later Zelda games into a Zelda 1 spinoff? The Deku Tree, Gorons, Hyrule Castle and such. Does it not kind of kill the feel of the original? Hrm.

How do you like this stuff over all? Oh and - would you play something like that? Yet another Zelda 1 remake that is.

Really nice remake of the Z1 overworld. I like it alot! There's pretty interesting designs and dungeon entrances especially. I think the rain should be white or blue though.

Hyrule castle i'd definetly say is out of place. Though, it all depends on where exactly this stands story-wise, how the game flows and if you talk with people and have cutscenes. Basically how story driven it is. If it plays like Z1 the stuff would feel more out of place.

Wondering how dungeons will be like. Not sure if you ever made a dungeon?

And yeah, I would play something like this. All that matters for me is for the quest to be good and this seems like a creative Z1 remake.

I second Avataro; mostly use elements that flow with the Z1 style. Sure, you can have different races around the overworld, they could give hints about the hidden sword upgrades, rupee locations and all of that. Especially since you're going for simplicity speaking of quest design?

For dungeon building, you could go for a design similar to those of the Oracle series. I don't mean changing the room layout, rather, changing the "dungeon flow". Keep the original structure from Z1, but add new stuff, be it puzzles, enemies and the likes.

If you can do all of this, I'll definitely be keeping an eye out to give it a spin.

Thanks for the feedback and those pointers. I'll be keeping them in mind. Basically, I want the thing to play out like a very non-linear Gameboy Zelda game with minimal story going on. I'd still want NPCs to interact with and maybe the odd sidequest or two.

As for the dungeons, I was thinking about adding new items such as the hammer and the hookshot. I feel like the gameplay might benefit but the more I change around the less it'll feel like Zelda 1 and I don't know how I feel about that.

I feel like the gameplay might benefit but the more I change around the less it'll feel like Zelda 1 and I don't know how I feel about that.

It's supposed to be a remake, no? It doesn't hurt to add more/new content as long as the core mechanics are still there. (I.E: The 8 objects and a final dungeon). Also, non-linearity was mostly present in Z1 as well; the only thing that made the player go to the dungeons in order was the difficulty present in each higher level. You could still tackle Level 8 and the go back and do Level 6 or 7 if you wanted.

Trust me, it won't do bad to make a major upgrade to the original. In fact, it's something that's needed.

I think ALBW-ifing Z1 is a good way to go about this. You don't need a fleshed out story to have Hyrule Castle and the like in this remake, I feel. But acknowledging them would be a step in the right direction. Also taking Zelda 2 into account, wouldn't it be more fitting if that was the remains of a old Hyrule Castle? Hyrule does have a tendency to move their castle around it seems.

As I said elsewhere, this is looking seriously good. Between this and the Hyrule Fantasy project two other people are doing (basically a aLttP-esque take on Z1), I feel like this could raise standards for how a Zelda 1 remake should look and feel and for good reasons.

I say add as many new things as you want. You've taken some liberties with the geography and it helps your map to stand out. Keep that up!

Are you making custom bosses? I have some ideas to flesh the bosses out a little more but can't code them

Are you making custom bosses? I have some ideas to flesh the bosses out a little more but can't code them

&nbsp;
Yikes, the reply box is giving up on me. Well, I'll be short then. First of: thanks for the feedback and the interest. I appreciate it! I'll think about keeping the beyond-Z1 stuff. As for the post I quoted (by P-Tux 7): I am not quite committed to the quest yet, but if I were to try and put everything down I'd try to have custom bosses, too. I can't code either, though. Still, feel free to share your ideas if you want to.

I was thinking about using the 6 original bosses and add Patra as the Level 8 boss while using Lanmola (some boss version thereof) as the other extra boss. That'd stay faithful to what Z1 delivered - mostly.

I like it! Id really like to play this! I can't wait to see the complete map, especially Death Mountain.

Back to Quest Design Help