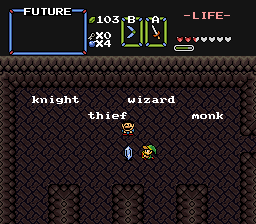 Overview Feature Quest
Information
This is an enormous quest. Do you have 20 hours to spend?
A province in a neighboring land needs Link. Ganon invaded a bunker, and someone must collect the six tears to enter. Link knows nothing of the province or where to find the six relics, but you can use the walkthrough.
Travel centuries in the past and future to get the tears. Can you change your present?
Play as a knight, wizard, monk, or thief, each with a set of class items.
v1.2 Full Game & Hard Mode. Play this quest in 2.53.
< >

Description
3 overworld maps split into 16 areas. 19 mandatory dungeons, 10+ optional dungeons, lots of puzzle rooms, and other stuff to do. Almost 100 different songs from various video games, more than 200 different text interactions with NPCs.
There are four classes to choose from. Knight, wizard, monk, or thief (Link's decision 1 2007 only had the first two). Each will get a different set of items based on the class's two common abilities: offense, defense, magic, trickery. No matter which you choose, you'll only be able to reach six out of twelve class dungeons, but you can see all in two playthroughs if (in-game information). Or choose none.
This v2.10 quest was almost entirely built while 2.50 was in beta. A lost version was recovered in late 2021, and finished fully in v2.10.
This quest is meant to be played in ZC v2.53. All testing was done with v2.53.
Story
There isn't much of a story as far as Link is aware. The governor for the region dumped him in the land, only asking him to collect the six pieces and retake a bunker. Fortunately, Link doesn't seem to ever need to know what's going on to succeed.
A southern province of Calatia has been under attack. Ganon has somehow managed to sneak into the King's Bunker, which is only able to opened for Calatia's king and queen. Whether Ganon found a way in or was somehow spawned inside doesn't matter, there's no way the King would want to visit the bunker now. So, Ganon thinks that he has a permanent foothold, and everybody assumes Ganon could never be driven out.
A hero who could collect all six ancient relics will have proven themselves worthy to enter in the king's place. To do so, Link will have to travel centuries in the past, and also centuries in the future.
(There's a little more on the quest's site.)
Tips & Cheats
I highly recommend reading the Rules and Tips, included in the zip file and also on the quest's website on jeah. I also included image lists of all items and enemies so you know what's what.

Walkthrough with full resolution maps and varying levels of spoilers on the quest's website. There is even a set of overworld maps where you choose which level you are on and it censors out all the screens you can't get to, a set of overworld minimaps if you need to know where the dungeons are but don't want to see the screens, and a HC and MC checklist. There's a list of cultural references and easter eggs.

Quest's site is here. The main page has no spoilers.
Credits
obake-san
Pure tileset (WildBill) with all added tiles by obake-san
Music (midi) downloaded mostly from vgmusic.com and arranged by obake-san (there is a little overlap between my last quest's music, but not much).
Red hands. That's not a person or player, just a description.
Please send me a message on PureZC or see the forum to report any bugs or other things.
Thanks Lordkronos, Useless Old Man Wisdom, RedHouse, and others for reporting and helping with bugs.

Edited 15 February 2022 - 01:45 PM
Though I have not finished the quest yet, I am at the estimated 60% mark, so I have seen enough to gather an impression of what the quest is about. With that said, I am likely to come back and edit the review later once I have actually finished.

Link's Decision 2 promises a really novel premise, in being able to choose a "job," ala certain old-school Final Fantasy games. The quest also boasts of 3 overworlds, lots of dungeons, time warps and shifts, programmed side quests, and more. Overall, I think the quest falls short of its ambitions and execution is lacking in several areas; but overall, LD2 is a really full and impressive quest when you consider that the quest was built in v2.10 and ported over to modern Zelda Classic.

Having chosen the thief class, I'm not entirely convinced there is any real difference in the thief job and other classes - beyond the arbitrary item restrictions among the different classes. I don't think it's possible to alter offensive or defensive stats between different "jobs" in ZC, let alone metrics like speed, agility, or stamina to craft a job system in ZC that compares to an RPG with a job system. The thief-only item(s) do offer a unique advantage and sequence-breaking chances, which are interesting, but doesn't really leave me convinced I'm playing a unique role. On the other hand, maybe programming some rare drops upon enemy death - which I have certainly seen in 2.5 quests - would go a long way to mimic a thief's steal command and add to the immersion. I might go on to replay with the thief's companion class, which I recall is the monk, in order to better impression of the class system and see more dungeons.

The dungeons themselves are good, not spectacular but good, and have enough twists and turns to keep me from getting bored. I like how the dungeons change in certain time phases and how changes in the past can reflect on future phases. Some things I don't like about the dungeons are the repetitive moveable block mazes and shutter door rooms, which slow the pacing down a lot and create tedium and backtracking when I have to revisit these rooms or chose the wrong direction. I also became stuck several times in moveable block rooms and had to F6 continue, due to no warp-reset tiles in these rooms. I also see a lot of pushable block and switch rooms where there isn't a permanent flag, admittedly which I've seen in many 2.10 quests, but also add to tedium when I have to do these puzzles again upon revisiting these rooms. There is also a curious abundance of Like Likes in the dungeons and caves, love this enemy or hate them, which has left me needing to repurchase a L2 shield much, much more often than usual.

The overworlds - meaning the different time phases - are pretty nice and detailed and good use of the tileset. There are enough secrets and sidequests to keep busy between dungeons, which I consider a necessity in a quest. In particular, I really like the golden statue sidequest and am surprised this was technically possible (if not added during the 2.5 port). I think the time warps are in the right places to prevent excessive walking around and there are enough obstacles to make the player look for the right route without forcing the player to walk excessively. I have always liked putting optional items at the end of dungeons, instead of just another McGuffin to advance the plot, which certain dungeons in this quest do satisfy. I have found a number of bugs where exiting caves places my character in (I'm guessing) unintended spots, and also rupee caves where I can keep collecting the money over and over again, but nothing that compromises the quest or would result in a soft or hard lock.

Challenge wise, the quest has struck me as quite easy. I completed the three parts of the arena before finishing level 4, and in general, never felt threatened by enemies or bosses, nor in need of a potion. Curiously, the challenge seems to be altered by the fact that either the swords are nerfed or enemy HP are buffed, which has become a recurring annoyance in that having to swipe enemies over and over again becomes unnecessary tedium instead of challenge. Music choices are good if not quite familiar if you've played a lot of ZC quests or official Zelda games. I get major Chrono Trigger vibes, not just from recurring midis, and time travels, but also from the tiles and other artwork throughout the quest.

So far, I'm around 16 hours in and only an estimated 60% done with the quest, so this is a fairly long one. I do plan to come back and edit this review once I have fully played through. That is to say that I've seen enough good things to make me want to finish playing through.

I will probably be playing this.