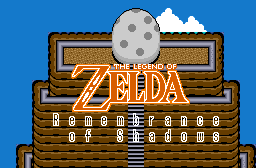 After being awoken one night, the young girl Marin learns of a threat to her home.
Now she must gather the 8 Instruments and save the isle from the forces of evil
< >

Description
Includes 9 required dungeons with unique puzzles and 2 new bosses per level!
Explore the world to find hidden rewards!
Dig up Shadow Shards to boost your attack power!
Fight invading Mario Monsters to earn tokens that regenerate your health!
Locate blue keys to unlock blue chests which contain a number of items!
Trade items with the locals!
Uncover 20 Secret Seashells to unlock a hidden dungeon!
Delve into 8 mini-dungeons to test your problem solving skills, get additional back story and other stuff!
Seek out a mysterious foe who waits to challenge all comers!
Collect a whopping 48 Pieces of Heart!
And much more!

All future updates will use version 2.0!

This shadowy double harkens the arrival of terrible monsters upon Koholint. Upon consulting the Wind Fish, Marin is tasked with gathering the Instruments of the Sirens from around the isle. Guided only by a strange Owl who speaks for the slumbering lord of the land; she must seek them out.
Tips & Cheats
List of all secrets and when they can be obtained
https://pastebin.com/sB3qCUrR

Edited 06 November 2021 - 05:37 PM
I enjoyed this quest creator's previous efforts, and enjoyed Link's Awakening way back when, so how does Rememberance of Shadows compare?

In short, RoS is a faithful and effective re imagining of LA but there are more than enough changes to make RoS a lot more than just a retread of LA. The overworld in RoS is strikingly similar to the overworld in LA, but there are important differences within the caves, dungeon locations, and the NPCs who inhabit the RoS world that this new world is akin to a universe parallel to the one in LA. If you remember LA, you'll be able to navigate the RoS world and recognize the same NPCs, sidequests, and locations as in LA; but with a serious twist of things to make RoS almost a brand new game. I interpreted this parallel universe theme from the plot of RoS, where the island of Koholint itself is supposed to have certain powers.

As a story-driven quest, the plot here is pretty coherent and decent enough IMO up to around the last 10% of the quest, where I think the events, bosses, and other story elements started veering off from the previous 90% of the game and fell somewhat flat. I did finish the post-game content, but was not nearly so much engaged in the game as I was through level 9.

The biggest take away I can see from RoS is that the gameplay is very, very good and dungeon design is markedly improved from some of the creator's previous quests. Caves and dungeons are pretty item-trigger heavy, so all of those items that you collect throughout the quest stay relevant and used all the way through to the end. The item-use theme is also present in most of the puzzles throughout, and these puzzles are executed in a creative manner without the puzzles being very difficult at all, nor obtuse in any way. There are a plethora of sidequests and other side content to keep the player busy between main dungeons, so the quest never feels like a dungeon-romping chore. Secrets are quite abundant and I recommend taking note of found secrets, because more often than not, the secret requires a later item in order to obtain.

Conversely, in terms of item-related puzzles and secrets throughout the quest, I noticed a theme where there was an ever-increasing need to switch items over and over - often on the same screen - which slowed the gameplay down a lot and became a small nuisance. This was a problem because often the item I need to switch to is opposite of the equipped item and the switching mechanism (I think this might be a quirk of this particular tileset) was delayed and slow. Another issue I ran into is that the dungeons tend to rely on narrow corridors, but the later dungeons screens are also filled with plentiful amounts of enemies with high hit points. Thus, levels 7 and onwards start to feel like enemy spam and will require lots of evasion, tanking damage, or time to clear the path through any given screen. Hookshot invincibility is also gone, which is partially a good thing because the hookshot is such an effective weapon that invincibility would nerf the difficulty a lot, which basically requires that the player will take damage when using the hookshot in the later dungeons unless he or she clears all the enemies on the screen. A big caveat is that the enemy-related issues are effectively nerfed heavily, if not entirely, because there is a healing spell and armor upgrades, both of which can become quite powerful with completion of sidequests and other exploration.

Difficulty wise, there is a definite and even progression, but overall, I think that RoS is pretty easy and relaxed in difficulty. A big part of this that that exploration and finding upgrades really mitigates the difficulty progression such that RoS was even easier than LA in my experience. Not that this is a bad thing, mind you, because I RoS was never designed to be a slog-fest challenge. Instead, navigation and quest progression are the real challenge to be found in RoS.

Music choices are standard fare for the gameboy-Zelda Quest genre. Overworld screen design seems to be a heavy nod to LA, which means there isn't a whole lot of pretty details on most of the screens if you're the type of player who cares about that aestetic. Though there are a heavy amount of scripting and other customization thoughout, RoS never bogs down and there are remarkably few errors or bugs. What bugs I did encounter seemed to be fixed quickly by the creator, which is appreciated. One persistent bug that happened to me is if I fall in a pit while in the process of crossing said pit with the hookshot or magnet - whether by miss-timing a hookshot jump or being hit by an enemy - my character was usually deposited inside the wall of the same (or immediately adjacent) screen. I reckon this is a ZC quirk and cannot be fixed without entirely eliminating all pits or the possibility of hookshot jumping.

Overall, I enjoyed RoS a lot and it took me between 25-26 hours to complete the quest from beginning to end of the post game.
No comments found!