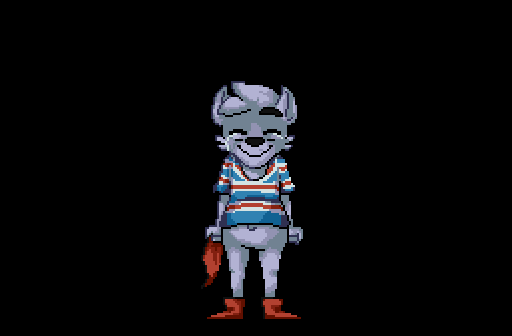 - Your weapon is your personality. The path you take will depend on it. Tolerance, Distrust, Sensitivity, Pragmatism, Antipathy or Contempt, etc. Play honestly. - About fifty dungeons, although you will only discover about ten or less... maybe 2 or 3 in one run, depending on the path you take. 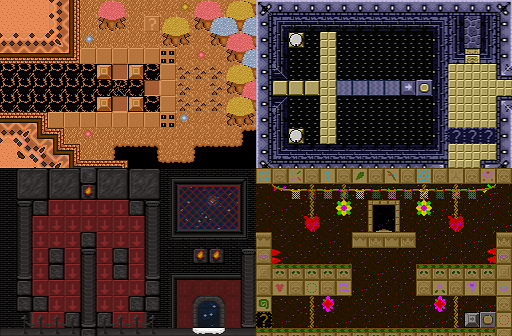 "Ifs" are creatures that sense your discomfort and come to you. Each of them represents everything we could dream of to solve our problems. They come to us during our mourning.

You are a black silhouette, a character who seems uninteresting but has a wide smile whose meaning is unknown. You are in hospital, not far from you, a roommate, apparently a quadriplegic boy.
What can you do?
Tips & Cheats
The complete solution here!
Credits
Graphisms: Sound Design: Beta-tests: Alice Lcrt ; Brek ; Cauli ; Contagion ; Datalian ; Drakio ; Erives ; Hibya ; Kiro : Kopa/Laska ; Makini ; Mitfox ; No Heart ; Riukko ; Roti ; Saphiros ; TheGhost87
=> And for this community: Epsalon ZX

Detailled Credits (don't watch them before finish the game): Here! 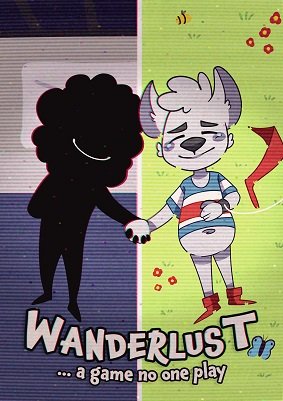 To start off, when I first saw this quest as a project page, I instantly was hooked. It looked very unique and experimental. The character designs had a lot of personalities and alluded to a “cutesy” game of sorts. The idea of verbal conflict was also very compelling and that leading to you build your personal character and story? Yes, please! When I saw this released I was super excited. Then the warning of sensitive themes kicked in. I think I felt an inkling this was going to be one of those quests, and while to an extent I was right, I think it did enough to win me over, albeit with a lot of nasty bumps on the road.

Before I go any further with this review, I want to preface this by saying I only did all the genocide routes I believe. I watched someone else do the “main” ending, based on what was required for it. I feel a lot of my criticisms stem from both paths, so keep that in mind.

First, the topic of pedophilia. I’m glad it didn’t become anything more than an opening question. But at the same time… why at all? I get you were trying to evoke a lot of reactions like “kill him” or “imprison him” but IDK, it gave me the impression this quest was about forgiving the worst of humanity, and it didn’t leave me overly optimistic after that. In retrospect, I knew that “other” was the option I think the quest wanted me to pick. For what it’s worth, I’m glad I did not have to forgive anyone truly horrible to get rewarded. BTW thank you for warning the player about this at least. Very good of you to do so! I can take in heavy subject matters, but I know not everyone can.

Now, I think the quest’s biggest strength is the visuals. I prefer consistent art styles, but I can forgive clashing when it provides really interesting environments and you’ve provided a lot. I love the central dungeon (great concept), and a few others. In particular, the animated pencil drawing dream was perhaps my favourite of the bunch. I love horror, and I’d say the genocide route’s final dungeon was also a favourite.

The fact that the genocide route didn’t outstay its welcome and had fewer bumps leads me to feel this route was my favourite despite not fully agreeing with the murder of the people I had murdered (for the record, I let someone else pick choices for me). My problems with this route are not huge. I find the criticism of cancel culture in response to the murder of someone to be ridiculous. I have mixed feelings on cancel culture, but my murdering of Bob was not out of cancel culture, lol. Just want to put that out there. Cancel culture narrative would have made much more sense if the “punish” option was to expose him on social media for being a complete womaniser. Beyond that, I think the snappy, quick nature of this route led me to hoping other routes had this sort of nature making for a much more replayable experience. This was why I almost gave this a second playthrough actually until I saw the “main” ending.

Now, the other big problem I’ve had was the Zelda portion of the quest. It felt like a strawman argument on why your quest was much better and why you shouldn’t want this quest to be your average ZC quest. The problem arises that this section was made intentionally bad and I almost wanted to quit for making such a terrible error. I don’t think anyone was hoping this would be your average ZC quest, so I don’t quite get why this option was provided. People have already experienced quite a lot of story already and would have given up at that point if they didn’t like your style. It just felt like insulting the player’s time, really. Easily the worst portion of the quest IMO. Don’t worry about people not liking stories existing, there are people on this site that love stories like myself, so just focus on making things you enjoy and don’t tank it by adding these sorts of things.

The choices you make changing the quest’s story and what dungeons you can and can not enter was the most compelling concept to me. I found a lot of character designs on the surface endearing and I can look past the imperfect English. It really helped the setting and initial tone (if you forget about the opening question) of the quest overall. What I’ve dubbed the “funny cave” is probably my favourite thing out off this entire quest. Seeing it change after each chapter was a treat and provided many highlights of the quest. I want to see a spinoff featuring Grapefruit.

Speaking of characters, I think the writing is a little pretentious. It’s like Undertale on crack, really, to me. I’m by no means insulting it, I think risky storytelling in ZC is really cool to see. I’m just not the biggest fan of it. I think this quest tackling so many heavy subjects is too much. I feel you should have settled for just one or two subject matters and fleshed them out. I personally think the combination of so many themes made for confusion and resulted in misunderstanding and hurt. It’s why these matters should be handled with more care and clarity, especially if these themes are important to you, the writer and if you want these themes to touch the reader. On a more innocent level, I found some yes or no questions tricky. I didn’t know how if yes or no would hurt them despite having good intentions. I wish I had a list of all the examples of what confused me, but I think you may see and understand what lines were more “vague”, I think.

I found the later dungeons in the “main” story path to be pretty convoluted and finicky due to the nature of the sideview engine and combo sensitivity in ZC. They’re really, really cool on paper, and I think at times work in execution, but I feel there could have been a little more polish and fine-tuning to make those dungeons work really well. I respect the ideas, but I’m just glad I got the genocide routes instead TBH.

Overall, it’s difficult for me to find how I feel about this quest. Perhaps I never will understand how I will feel and maybe that was the intent here. I think I like it more than I dislike it though, and it leaves me hoping you do more with ZC because we need more quests like these, I think. Quests with interesting structures, worlds and ideas all around. I don’t want any of this to discourage you, this is just one person’s feelings at the end of the day. But personally, I hope for some less social commentary/introspection and more in-universe world-building - the Ifs were really cool! There have been many non-Zelda quests in the past, and I for one welcome this to the collection.

I am not going to rate this, I think it's too impossible for me to do so. But I do have genuine feelings both good and bad about this quest nevertheless.

Posted 09 September 2021 - 12:27 PM
I played this game during the "beta-test" few month ago, and played it again few days ago, and, even if it's not my cup of tea around (story, old zelda gameplay) i can like it for all effort put it in.

We need to play more than 1 game to understand all the game because there is a lot of different ending good or bad.

Really little problem is about the story and who will play this game, a person who was bullied during all his childhood or experienced something hard will feel touched by this game in contrary to people having a "soft" life.

this is "ballzy" to create a game from a zelda's engine with a gameplay and story so different from a classic zelda game, closer to game like " undertale " but less subtle for the story ( even if it's complicated to be subtle with a old engine, having some basic movement and sentence to create a world )

I encourage a lot games like this, trying to evolve beyond classic gameplay/story =)

Posted 08 September 2021 - 04:56 AM
I got an ending. I have mixed feelings on this quest, but I do find the character designs and some of the areas quite charming. I'll need to see more endings to get a proper feeling on this quest as there was themes in this quest that were quite disturbing.

There is a lot of confusing dialog and choices you have to go through however.