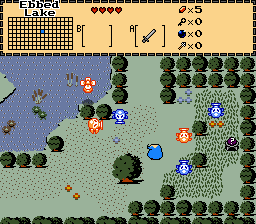 Overview Feature Quest
Information
NOTE: Created and tested in ZC 2.53 beta 55. Other versions may cause issues!
Nayru's Odyssey is a collaborative quest originally made for the 6th quest contest. It's a dungeon romper with minimal story, but has been updated to a definitive edition.
< >

Description
Nayru's Odyssey was originally a 6th quest contest entry, but this version is updated to be more complete and has several additional features. The main dungeon romping gameplay also comes packaged with some mini dungeons. Some quality of life changes also help the player navigate the world more easily.

One inadvertent bug exists in level 2 from the test version, but it does not break anything. (Depending on the day of the week, a specific pot is missing an undercombo even though it's set properly.)
Story
Following a great war, the legendary hero failed in his quest. Ganon has ruled for many years and Hyrule has mostly become desolate. Hearing of the Triforce pieces that are scattered throughout the land and accepting the fallen hero's sword, Nayru starts on the path of a warrior to return Hyrule to its prosperous state.
Tips & Cheats
- Find the Truth Crystal in each dungeon! The wall tiles serve as puzzle hints and guide you toward the solutions.
- If you're stuck on where to go next, a hint cave near where you get your first sword updates after every major dungeon.
- Most upgrades are hidden around the overworld, so be sure to check suspicious areas and backtrack to unfinished locations for more gear.
- The compass is your friend - it directs you to an important room in each dungeon!
Credits
=====Creators=====
TeamUDF
Rainst0rm
Arkia

=====Special Thanks=====
ZoriaRPG
Evan20000
Nintendo
The Zelda Classic devs
Anyone who played the quest!

Posted 26 July 2021 - 07:53 PM
This was a very engaging, fun quest that kept me playing from start to finish. That alone gets 4 stars -- but the level of polish, the creative puzzles, the L7 item and the highly engaging overworld and the way the levels and the overworld interacted at times gets it #5. The game was never overly difficult but was challenging at times and had a creepy, eerie vibe in places in a good way. L2 comes to mind here. UOMW stated it well and I don't have a lot to add. It's a genuinely good addition to the database.

Posted 05 July 2021 - 04:32 PM
When I saw that the United Dairy Farmers team was coming out with a new quest, I was pretty interested. After all Eiyuu is in my personal top-3 favorite ZC quests of all time. While Nayru's Odyssey is almost nothing like Eiyuu at all, this latest quest does succeed in being an excellent gameboy-style dungeon romper.

The overworld is designed in a similar manner to the LoZ overworld, but with the clever addition of some overworld dungeons and minidungeons. These above-ground dungeons really work in my opinion and fit well with the rest of the overworld aesthetic. Screen design is conistently aesthetically pleasing and while there are not a ton of secret to be found, there are enough overworld secrets to keep the player observant.

Dungeon design is definitely the highlight of NO. In addition to the overworld dungeons, there are plenty of subterranean dungeons and mini-dungeons. I might be reaching here, but I think a good way to describe the dungeon design is that these seems like dungeons that Nintendo would have put into an official Zelda game. By that i mean the dungeons are never very big, intricate, or particularly complex, but usually have a fair amount of interesting puzzles and navigational quirks. Some of the puzzles are novel and will make the player think a little bit and try various out-of-the-box tactics, for instance, the "phantom carnival" puzzle in level 8, but are never obtuse or downright stupefying in my opinion. Bombable and walk-through walls are almost always obvious, if not plainly marked, much like in the official Zelda games.

Difficulty is pretty mild overall. The quest seems to start out somewhat difficult, levels into a comfortable level, jumps up around the 3/4 point again, but then levels into a comfortable level again if you manage to find the L2 armor, L3 sword, and health upgrades. I found the final boss to be a big pushover after finding all of those defensive and offensive upgrades, so perhaps your mileage may vary. The quest makes extensive use of damage tiles and lava jumping, which I found to be the biggest difficulty challenges - especially in the later 1/4 of the quest. Again, Your mileage may vary if you're better at precise movements than I am.

Music choices are pretty ZC-standard and you have probably heard all of the midis in this quest before. Item triggers and puzzles are designed in such a way as to keep all of the items relevant throughout the quest, which while resulting in lots of item switching, does keep a good variety of different puzzles. The plot is indeed pretty limited, but seems to be in accordance with the Oracle games, which I have to admit, I still haven't ever played. This might be important, because like a lot of ZC quests, I get the impression that the creators are trying to create something on tier with an official Zelda release with NO. This quest does succeed in that endeavor quite well, and better than most. Overall, I enjoyed the play through quite a lot and took about 12 hours from beginning to end.
No comments found!