The Legend of Zelda: Heir to the Hero 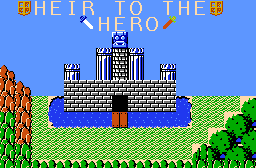 Overview Feature Quest
Information
Link jr. must find the pieces of the Triforce of Courage, scattered across 8 dungeons of various sizes and lengths, in order to gain access to the lair of Oga'lona, the Moblin Warlady commanding a remnant of Ganon's army.
Edit: Changed some dungeon music, nerfed Death Knights, fixed a potential soft-lock. Minimum required Quest Revision: 1.7
< >

Description
Well, I've been eyeing ZC off an on for the past year and a half or so, and I finally got a strong-enough computer in December 2020, and one of the first things I downloaded was ZC and ZQuest. This is my first quest that took me about a month or so (breaks included) to finish, and I hope you like it. Please give me feedback, let me know what I should and shouldn't do in my next quest, what I should try, what I should do again, etc...

This quest contains eight main dungeons ranging from small to large, as well as a final dungeon and 5 mini dungeons, as well as a few "custom" bosses.
WARNING: Contains some potentially tedious block puzzles, but they shouldn't be too bad.
This should be a 16 heart quest.
Edit: Fixed various problems mentioned by user Luet, as well as the pit outside Level 4.
Story
It has been twenty years since Ganon's death at the hands of Link, Hero of Hyrule. Since then, the Triforce of Courage has been returned to Hyrule, and Link married Princess Zelda and the two had a son who was creatively named Link jr.
One day, however, Link feared that Ganon would soon return, so he left Hyrule in search of a way to kill Ganon for good next time (or as long as possible). When he left, he broke the Triforce of Courage into 8 pieces in case something happened to him or Hyrule.
A year after his father's departure, Link jr had a dream of Ganon's minions getting revenge on Hyrule, so he decided to seek out the Triforce of Courage and use it to enter the fortress of Oga'lona, Ganon's lieutenant who was hiding near North Castle Town.
Tips & Cheats
There is a Piece of Heart in every main Triforce dungeon, as well as 8 total Heart pieces in the Overworld, for a total of 16 Heart Pieces.
Roc's feather, found in one of the mini dungeons, will make Level 8 much easier.
Explore Castle Town. On nearly every screen there is an open door. You can find all sorts of useful information and whatnot in the town!
Walkthrough Playlist on my YT channel:
https://www.youtube....C6GmpjHEYE1to_d
Credits
Quest by Twilight Hero (me)
Play-tested by my Brother and friends
Music from ocarina of Time, A Link to the Past, Super Mario World, and Super Star Wars, downloaded from VGMusic.
Other music from the ZQuest library.
The tips for the bottomless pits were from a user of the Forum, once I find them I will put them in the credits.
Oga'Lona's name is inspired by the character Ogalon from Hyrule Total War/Hyrule Conquest by UndyingNephalim.

Edited Yesterday, 12:53 PM
Admittedly I have not played much of this quest yet, but I got soft locked. I was exploring the over world and fell into the Gerudo Pit. I only had a candle, a potion, and 4 hearts so I can't kill the blue levers.

I like that you can see almost the whole over world right off the bat, though it is pretty empty. I did notice some errors around the overworld, like under combos not being correct. Anyway, good attempt for a first quest. I think you have the right idea, allowing the player a good deal of freedom.

Posted 20 February 2021 - 07:22 PM
Hello Twilight Hero...First of, Congrats on publishing your quest. :-) That being said, I am now about to entering level 7. I have notice a lot of technical errors. :-( It looks like a beta quest. If you need any help/tester let me know. I'll be happy to help.

Posted 16 February 2021 - 06:49 PM
current;y working on a walkthrough series of this quest on youtube. The videos are unlisted, so use the link in the tips and cheats section of the quest page.

Posted 25 January 2021 - 03:47 PM
Sorry about the rough launch, everyone. I hope that this quest is now fully playable. Rest assured that my future quests will have a smoother launch!