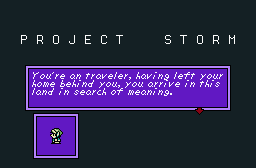 Overview Feature Quest
Information
A short exploration based quest in a hostile world fully of mysteries.
< >

Description
This is an exploration focused quest that was produced back in 2016 but remains not quite complete. It's completely beatable from start to finish, but some of the extra content that I want in it had to be cut and blocked off. It was heavily inspired by A Tribute to Yeto's Quest back when that came out.
Of note: Not all of the post game material I wanted to put into this quest is in it, as such, the areas that were tied to that are blocked off with literal road blocks and signs, should be obvious what those places are.

Expect an hour or two long adventure to see the ending, then a little bit of postgame stuff if you so choose to take part in that.


Other Features: This quest uses enhanced music, which you will need to download!:

Update notes:
11-9-2020:
Fixed a string playing when it shouldn't on a certain screen in a very unlikely scenario.
Increased the power of one of the items by a very tiny margin.
Story
You play as Festenia Breeze a traveler, and the main character from Ruins of Myths, as her desires for exploring the world and it's secrets brings her to a new land.

There isn't much plot to speak of, but the places you go to have some history that you might get a glimpse of.
Tips & Cheats
Here's a selection of tips and hints that could home in handy on your journey:
Credits
The EzGBZ tileset.
Dimi: for coding a boss.
Avaro: for providing some additional coding work on a boss I did.
Moosh: Scripting and other.
TheBlueTophat: for providing a rough dungeon draft.
Saffith: Scripts.
TheOnlyOne: For inspiring this.
Bunnies: Very petable, much fluff.

Edited Yesterday, 06:48 PM
Let me preface the review by saying that I'm not 100% finished with post-main content, but have played through enough to form a good, educated opinion.

Project Storm is one of those artsy, experimental, mold breaking ZC quests that comes around here on occasion. While PS seems to draw inspiration from 2016's Tribute to Yeto's Quest, there seems to be themes from Eiyuu also thrown in for good measure. If you are a fan of those two quests, as I most definitely am, you are probably going to love Project Storm. Much like TtYQ, PS definitely does not hold the player's hand and lead him or her along the way; much to the contrary, PS will have you constantly asking "what the hell do I do now," and leave you thinking, time and again, that you are stuck with no way to proceed. Like Eiyuu, Project Storm is a substantial quest with a deceptively small overworld, is short on scripted gimmicks and complex bosses, is mythological, and centers around a central dungeon that the player is sure to visit over and over again.

What project storm really excels at, in my opinion, is breaking the mold and being very difficult to define. Is this a puzzle quest? While there are lots of puzzles and unusual, out-of-the-box means are necessary to proceed, there is enough combat and challenging boss fights that I wouldn't call this a puzzle quest. Is PS a Metroidvania? While the central dungeon does need to be revisited several times, with items from other dungeons needed to proceed - if for nothing else than a practical level - there is also a pretty open world to explore. I wouldn't even call PS a miniquest, let alone beatable in 1-2 hours - like the description suggests. While technically there isn't a whole lot to do in order to beat the main dungeon, you are going to be scratching your head so much, pondering what to do, that you will spend just as much time in PS as you would in a full 9-level+ traditional quest. My time, before any post-game optional content, is over 11 hours, and I'm quite familiar with the out-of-the-box mechanics and gimmicks that Project Storm employs.

Difficulty wise, this is definitely what I would call a difficult quest. While not a straight-up challenge quest, boss fights can be pretty unforgiving and there are some screens full of difficult enemies and obstacles, and if you don't happen to find the big offensive and defensive upgrades ASAP, you will have to face this combat with poor offensive/defensive capability and little health. Combat aside, I would definitely say that just finding the way to progress is at the core of Project Storm's difficulty. Like Tribute to Yeto's quest, there are many, many false walls and red herrings designed to keep the player off balance; there are many areas that look relevant in order to proceed, but, in fact, offer little more than allowing the player to say "yep, I did that." While I won't spoil that synopsis with specific examples, the red herrings do seem to have a logical consistency and definitely make sense - if only in retrospect. I'm not sure how much of what amount to red herrings are due to the fact that the quest isn't finished, as perhaps some of the optional content could have more importance were this not a beta, but I'll go ahead and say that if an area or specific challenge looks impossible to beat, it probably is impossible or is completely unnecessary .

I am slightly dissatisfied with the save/continue system in PS. Notably, the latest update forces the player into a weird purgatory zone upon death, which I admit I haven't explored much, and this requires a lot of manual resetting following a game over. While there are also an abundance of save points throughout, and that is important because the familiar F6>save/retry/continue option is not present, the save points are conspicuously absent before places where the player is likely to die. Some examples where I would appreciate a save point include immediately before the final boss, one closer to the optional "digdogger" boss, and one that is easier to find in Spatial Space. In the Undersea Ruins where a necessary item is reposed, there is also a significant amount of backtracking needed in the eastern portion of the map, through challenging screens, which the player needs to go through at least two times. I would consider a few tweaks to the eastern screens in that specific level in order to give the player an easier way out past the locking pegs.

Some other strong points include the music selections throughout. There are some pretty fitting midis throughout that you will probably struggle to place the source of. This definitely isn't one of those quests with the same midis you've already heard tons of times. Individual screen design is mostly quite strong IMO with very little redundant or needless mess clogging things up. There are details and decorations where those things are needed or add to the ambiance, but not so much that the player struggles to discern important clues about how to proceed.
Overall, as a fan of quests that require running around in circles and looking for elusive solutions to move forward, Project Storm really delivers. The quest maker's description is spot on in that PS is definitely not for everyone and you probably should quit if you just can't make progress and are having a frustrating time. While that often strikes as unfair while playing, Project Storm is, in fact, quite fair and doesn't force the player through cheap, obtuse, or tedious difficulty in order to advance forward. Project storm does force the player to think and be observant, try again after a game over, and requires good memory (or map making at times) in order to advance forward. Fortunately, advancing forward is always easier than one might think and overthinking things will cause nothing but frustration. As something this out-of-the-box and novel, Project Storm is a rare gem in the ZC universe.

Posted 07 September 2020 - 09:33 PM
Possible game breaking bug. It is possible to push the lock block separating the Living Forest from Gale Fields, making it impossible to return. I am now stuck in Gale Fields with only the walking stick and no other items besides the glove. If I decide to continue, I'm pretty sure that I'll have to restart completely.