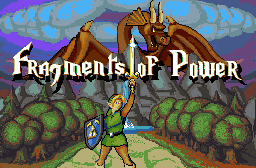 Overview Feature Quest
Information
GO TO ONE OF THESE LINKS FOR THE NEEDED VERSION! 2.55, ALPHA 97 or more recent.
Download Alpha 99 here
< >

Description
This is a dungeon romper, that is a reimagining of DarkFlameWolf's Fragments of Power.
Story
In the land of Narkura, people are cursed to live eternally. You gather the 8 dragon scales in an attempt to break their curse.
Tips & Cheats
Use your 4 button items to traverse dungeons.


Update (09-03-21):
Fixed a minorly major sequence error where you could get through level 8.5 without first finding an item you were supposed to need.

Update (09-06-21):
Fixed a couple potential minor sequence break issues in levels 4 and 5.
Hopefully made the kid pre-level 4 appear correctly.
Added Compass Beeps to every room in dungeons with a key, or the dungeon item.

Update (10-04-21):
Nerfed late game bosses and enemies.
Buffed early game bosses.
Nerfed the first three sword beams.
Added a new area before level 5.
Added Moosh maps for every dungeon.
Customized the subscreen, both active and passive.
Turned off the ability to stunlock.
Replaced quick switching items with having 4 button items.
Other small fixes, and possibly big ones that I forgot.

Update (12-10-2021):
Fixed F6.
Credits
I did everything. Bagu made the title sequence.
Got scripts from some people, mainly Moosh.

Zaxarone, Shane and this other guy pointed out a few issues.

Edited 10 August 2020 - 05:40 PM
I will preface this review by saying that I can't recall playing DFW's Fragments of Power, so have no frame of reference to how FoP: Reimagined compares.

FoP: R starts off at a very relaxed, if not slightly boring pace of difficulty and exploration, but really comes into its own towards the latter tiers of the quest. As a dungeon romper, the quest is slightly incomplete, because the earlier dungeons are all around quite easy and plain; however, the later dungeons up the challenge - both in terms of enemy and boss combat, as well as navigation. Still, I think it might be because the maps are rather small and many of the dungeon rooms are unimportant, I was left with a feeling of wanting more from the dungeons: more puzzles, more secrets, more windiness - I'm not completely sure. The stone beaks and accompanying hint statues are a good idea, though I have to admit the hints themselves are a bunch of "no duh" for the most part.

The dungeon bosses are all quite imaginative and well executed. While the earlier - albeit technically fancy - bosses are relative pushovers, the boss fights in the latter tiers are quite challenging and gratifying. To those ends, the difficulty curve of FoP: R is pretty logarithmic in my opinion. As said, the curve is pretty flat (easy) up to around level 5 or 6, where the difficulty starts to turn upward at a gradual pace. Then, all of a sudden, from perhaps the boss of level 8 through to the final boss, the difficulty shoots up into space so to speak. The boss fights, and difficulty as a whole, in level 8, through to the final boss - and accounting for sword and armor upgrades - are incomparable to any of the difficulty that came before. I would almost swear that there were two quest makers at play here were it not for the fact that the one quest maker claims to have done it all.

The overworld is quite well designed and replete with secrets to find. All of the different overworld sectors blend and flow together well to create a cohesive whole, and there are no glaring errors or questionable touches to my (perhaps undiscerning) eye. As sub-dungeons, to the end of obtaining a key in order to unlock the dungeon proper, the individual overworld sectors are a good idea. Still, much like the dungeons themselves, the overworld sectors up to around level 5-6 are comparably just not as interesting as what comes later. Early on, the overworld segments seem to consist of a simplistic series of 3-4 screens in order to find a key or switch, and the series is repeated a few more times until you find the dungeon key. Conversely, in order to access the later levels - especially levels 7 and 8.5 - the player has to do a fair bit of exploring. Still, I would say that the overworld is the highlight of the quest for me.

Music choices are also pretty good, from overworld sectors to individual dungeons, and are - for the most part - not just the same old Zelda-series songs we've all heard hundreds of times. Even the subscreen seems to be designed with thoughtfulness, as all the items (at end game) are arranged in such a way as to show organization amid a lot of empty space. I can also say that FoP: R is well play tested, as I can't recall running into any bugs or inconveniences that necessitate an F6>continue.

So, while I can tell there is a lot of thoughtfulness, good design, and attention to detail in FoP: R, there is also a fair bit of "meh" - almost entirely early on. I almost felt like giving up on the quest in the earlier parts, but am pretty glad I stuck with it, because the quest comes into its own at around the 1/2-2/3 point. I spent around 5.5 hours from beginning to end with being diligent about exploration and finding secrets.

I don't have a small key to open any of the pair of locked doors on the pathway to the boss I assume... (from the Dodongo mini boss, go one screen down, one screen left, and take the stairs down). I've torn the place apart looking for a small key and I'm done. I even pushed every candle and walked behind every column to no avail.

I have no idea what the Owl is referring to when it says "Remember what you saw before". There was an extra room on the map in Level 5 in the lower right hand corner, but I can't figure out how to get into that room and the lens shows nothing.

Do I have to get the key from outside the level? If so, where because at this point, I don't feel like checking every single cave I've been in... What am I missing...