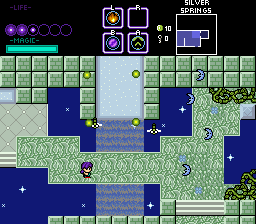 Overview Feature Quest
Information
Reikon is a story-driven Metroidvana, the conclusion to the trilogy that started with Hitodama and Yuurei. Switch off between two characters with unique spells to unravel the final mysteries of the Yuurei and the Labyrinth! Don't forget to pick up the enhanced music here.
< >

Description
Features: Update (5/23/2020):
-Fixed some counter bugs for late game
-Fixed several subscreen dialogue issues
-Fixed a bug where Dark Defense wasn't working in certain areas
Update (5/20/2020):
-Fixed an issue with the display of certain upgrades
-Made a broken upgrade function properly.
-Fixed a few event flags issues that caused incorrect subscreen dialogue and other issues.
Story
Hundreds of years after the events of Yuurei, a young boy called Holm awakes in the desolate Lac D'Amour with no memory of his past. Soon, he meets Flect, a mysterious girl with deep knowledge of the Labyrinth. Join the two of them on their treacherous journey to find the source of all ghosts and save the world from a powerful force.
Tips & Cheats
About Sadistic Difficulty
Sadistic difficulty is an open secret, ultra-high difficulty mode that can be accessed by holding down from Difficult on the title screen. It is HIGHLY recommended you do not attempt this difficulty for your first run of the game. It has some big challenges verging on the unfair, and will not be enjoyable for the majority of players. Know what you're getting into. Just say no to Sadistic, kids!
Credits
Please beat the game for a full list of credits.

However, I'd like to give a special shout-out to Dimi, Evan, Moosh, and Russ, all of whom tested and contributed content such as bosses. And in particular, I'd like to thank Russ for being endlessly encouraging and patient over the long time I've been making this game. I couldn't have done it without him.

Posted 18 May 2020 - 09:07 PM
Rake-on is the long awaited sequel to both Leafblower-off and Hoes Mad At Acheron thus marking the end of the Lawnwork trilogy. If you haven't played the first two, I strongly recommend playing them first both to better appreciate the plot and to get you more familiar with the game's systems as this game is substantially tougher than the past entries. While you can play (and appreciate) this game without the prior games, it can't be overstated that you'll miss a lot if you tealdeer through them. The areas in this quest are some of the most interesting in the series, and the enemy/boss design is quite good as well. It's difficult to talk too much about the story without spoilers, but I think it's competent does what it sets out to do pretty well, and the characterization of the cast is aided by humorous subscreen skits in each area. There's also a substantial postgame that gives you a lot more to do and is surprisingly replayable to keep you invested for quite some time.