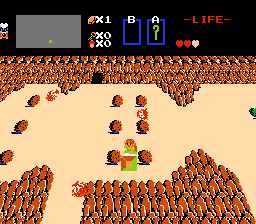 Overview Feature Quest
Information
Imagine Zelda 1, but distorted through a mirror. Everything is familiar, yet slightly off. All the items are new, all the enemies behave a little differently. Play as Princess Zelda (or a huge list of alternate costumes) in this semi-nonlinear quest with many item puzzles and a mode menu which lets you change your music, graphics, and gameplay settings anywhere. (NOTE: Please use ZC version 2.53.1. Ideally, Beta 31 or above!)
< >

Description
A sort of "what if" 6th quest, with a very simplistic NES-style story and many faithful elements to Zelda 1, but with totally new items, different behaviors for familiar enemies, a mirrored overworld, and a twisted new form of familiar dungeon design and caves.

Although very Zelda 1-based and with a few cryptic elements of NES style design, there are also much more complex puzzles involving new items that could not appear in Zelda 1 (although this quest is nowhere near as complex as Link and Zelda: Panoply of Calatia, and is meant to be more approachable and simple than that.)

An optional Mode Menu (press the Map button) allows you to change the game's entire presentation, such as how the game scrolls, whether the player can move in Zelda 1 four-way style or eight-way diagonal movement, the difficulty of monsters, the ability to attack with the mouse, what music is playing, how advanced the graphics colors are, custom character costumes, and more! There's no wrong way to play, so pick any settings you think would be more fun!

A manual of all modes is included with the quest, in "Mitsukara 6th - Mode Menu Manual and Costume List.txt".

Story
Moments after the events in "The Legend of Zelda", Link is captured by Mirror Gannon and taken to Mirror Hyrule, along with the Triforce of Power which has been broken into eight large pieces.

In Mirror Hyrule, everything is familiar, but nothing is quite the same. Princess Zelda must seek the help of strange creatures and unfamiliar items to navigate this reversed world and it's mysteriously intertwined underworld. Is Zelda's wisdom enough to overcome these strange puzzles and save Link... or is she headed straight into a fiendish trap?
Tips & Cheats
Each time you continue the game on the overworld, Impa will tell you a hint in the Debug Console window. These hints cycle through 11 possible hints (before cycling back to the first), and those 11 each update if you've obtained certain items or made certain progress. If you're stuck, you can try F6ing a few times to see what all her current hints are. This isn't required, but can help if you have no idea what to do.

Although knowledge of Zelda 1 is not required to beat this game, it is helpful, since there is a Z1-style minimum of explanatory text within the game, and many patterns may look more familiar if you know Z1 well. While this quest has item and puzzle elements more akin to the Gameboy Zelda games, this is overall very much a Zelda 1 fangame.

Dead ends are almost never just dead ends, especially if you had to use a key or do something special to get into them. Explore in detail before you backtrack.

Zelda 1 pushblock logic is in effect. You may need to kill enemies in the room to push a block. You may need to push any block on the screen, although this generally only happens on screens with a few blocks. A certain item you get early on may make it easier to determine which blocks you DON'T need to push, and find the ones you do.

Nothing in the Mode Menu is required, although it can be helpful. Think of the Mode Menu as a sort of breaking of the fourth wall, to adjust the game to your own comfort and enjoyment- whatever makes the game more enjoyable for you is what you should pick.

You can save a lot of time by using the "Save Here" option on the mode menu very often, and thinking about where you want to continue from when you're at the overworld's continue screen since it can take you to dungeon entrances you've visited.

If there are strange spots on the ground, there's a good chance something is hidden in that area.

There are 9 dungeons in this quest. The first three are "Level A", and can completed in any order. You must complete all three Level As to get through levels 4-6, which are "Level B". After that comes two dungeons of "Level C", and the final dungeon is "Level D". If you are absolutely stuck finding these dungeons and can't figure out a way in, it might be helpful to...

Spoiler
...look up a map of where dungeon entrances are in Zelda 1's first quest, then consider the shapes of the dungeons you've been to.

To play the Randomizer mode (this code is also revealed at the end of the quest):

Moosh
- 4 way movement simulation script from BrockLesnar.qst, one of the first beta testers, design feedback, encouragement, being cool about it when we had some of the same ideas, and inspiration for the Impa Hints system.

ZoriaRPG
- "Magic Map" and "Magic Compass" scripts. Thanks for your patience and flexibility about how the contest was run, it improved the experience a lot in the end!

Venrob
- Made an All-Caps zscript function for my enemy names.

NOTE: If I have missed crediting someon, please feel free to let me know what they made and I'll edit this description to include the credit! (Assuming the credit seems legitimate.)

All submitted costumes are credited on costume banner in-game, and in the costume list in the description above; all others drawn by Mitsukara (though often based on sprites from the games the characters originate from).

Posted 18 March 2020 - 06:49 PM
This was, all things considered, a very unique and interesting quest to play through. I don't think there is any other quest or game like this one, which means that if you're looking for something new? Well, this quest sure delivers. That being said, I would not recommend this quest to everyone, it requires a rather fundamental understanding and expertise of Zelda 1 in order to properly progress. I don't mean that in a sense of skillfull play, in fact, this quest has a lot of difficulty modifiers in order to appeal to a wide variety of combat preferences. No, I mean more in how Zelda 1 was literally constructed, on the cartridge, how the screens were placed in memory in relation to one and another. A lot of that stuff is put to great use here, and while it is a bit tutorialized, it can be hard to grasp how it all ties together without that knowledge.

Once you're on the same page as the quest though, it delivers some extremely goofy and silly scenarios and ideas, and it just keep building up more and more of them as the game goes on. It's definitively a puzzle heavy quest, but one that offers a lot of alternative solutions and creative thinking. Not only that, there are some unique and creative minigames as well that are fun to take part in, not to mention some neat, but easy, boss fights. It's a very well rounded experience, it's just not a very traditional one. If you want a more traditional Zelda like quest, there are a lot of much better candidates in the database. If you want what this quest offers though? Well, there is basically only this one. The wide variety of options, including many nice cosmetic ones, makes sure that the adventure is attuned to your difficulty and mechanical tastes, I think just about the only thing you can't make easier is puzzle difficulty.

So yeah, want something new? Give this quest a spin and see what it's like; just expect to have to do some thinking in regards to puzzles.

Posted 20 March 2020 - 01:02 PM
i am stuck with boulders in the labyrinths that I can't move when I enter a dungeon, they are all over when I enter a room with those I can't move them, and the enemy I am trying to destroy is indestructible and I can only get what I got so far in this quest, I need major help, ASAP