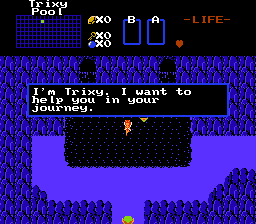 Description
Is my first quest
A classical 9 donjons plus a lot of minis caves
one standard overworld
the diffficulty is just little more hard that the original because use some build zc monsters and some i modify.
Story
Same that the first LOZ
Link need find the 8 triforces pieces before save Zelda.
Tips & Cheats
Trixy a new Fairy help you with guide info.
pay for good hint a lot of guy

Credits
Me Nyrox and my girl Lee-la-jolie for better english of my in the game.

Edited 28 March 2020 - 09:01 PM
Not bad for a first quest, but way too easy for me. All bombable walls are marked, leading to too much money and easy passage through dungeons. I was filled with health and rupees the whole time. I don't remember any room that had a shutter close behind you forcing you to fight it out. Instead lurking in doorways was allowed so you could just shoot and stab til the room was clear.

On the plus side there were no real errors except for a few oddly placed warp return points. Oh, also the lava path given for the maze in level 9 doesn't match the actual path you must take. The clue says the last direction is east but is actually west. Not too hard to figure out though. All the mechanics of getting around the overworld were fun.

The best part of this quest is the dungeon design. There are many clever layouts and thoughtful ways of routing the player through. And I enjoyed how often you were allowed to see the triforce way before you could actually grab it.

I say don't be afraid of making a more challenging quest next time, Nyrox. Until then, thanks for this one!

Edited 26 February 2020 - 02:01 PM
Some minor fixes are needed here and there. The main glitch is in Level 8. If you enter Level 8, you will not be able to leave unless you collect the triforce piece. 2/25/20
There is also a minor fix with the medicine shop in the southeast graveyard where it is supposed to be in a cave, but for some reason the shop decided to happen outside the cave where you can't even reach the cave entrance. 2/26/20
English is ok, some grammatical errors, but it doesn't take away from the game. I actually like the spelling of "Donjun" versus the proper spelling of "Dungeon". It actually gives a sense of the hero being a strange distant land where there may be a language barrier at times.