A Link to the West 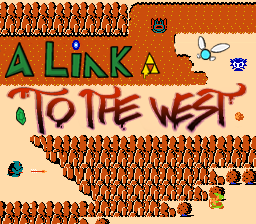 Overview Feature Quest
Information
The princess of Westrule is missing!
This is a fairly straightforward NES style quest with lots of secrets and combat.
< >

Description
Experienced players of the first two quests should recognize a similar flow in Westrule. Five heart containers, two sword upgrades, the blue ring, power bracelet, and letter can be found in the overworld. The rest of the special items and two bomb upgrades are in the dungeons. There are only two door repair charges, but clues can help you steer clear. Pushblocks are always multidirectional. Wall Masters and Like Likes move a bit quicker than Link's last adventure in Southrule.

I'm an average player so the difficulty is set that way. Of course I'd like to hear from any of you who are able to finish it without some sword or ring upgrades.

Btw there's no scripting here, just old-fashioned Nth style stuff with a few twists.
Story
Making his way west, Link has found himself in the province of Westrule. Locals say that prior to his arrival, the Triforce of Wisdom was looted from the Royal Museum and their princess was abducted by someone bearing a very close resemblance to Ganon. Does the princess even exist? Or is this all some sort of elaborate trap?

Unfortunately, Link left his sword at the sharpeners and it won't be ready until next Thursday.
Tips & Cheats
Take some notes and make some maps.

Back in the day when playing Z1 and Z2 for the first time, I for one enjoyed making maps and keeping track of clues. If you're a player with a brain that doesn't require you to do that, well hats off to you. If you're like me however, and don't have a super sticky memory but you don't happen to enjoy jotting down where some passages lead to or walls you've tried bombing, this quest may not be for you - just sayin'.
Credits
Nintendo
Alphadawg
Everyone who helped with the comprehensive ZQuest 2.50 tutorial
PureZC, Zelda Classic, and all involved with creating and supporting ZQuest
The best quest creators for their inspiration - you know who you are!

Posted 23 March 2020 - 11:17 PM
I like these old school NES style quests that are meant for more experienced players.

Posted 30 November 2019 - 03:03 PM
This quest is killlllling me but I'm not giving up! I have made it to level 6 but need a better sword. Where is the 3rd Sword located? Please don't tell me the Mall.