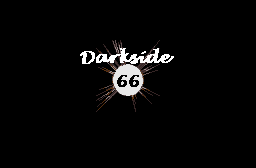 Overview Feature Quest
Information
This quest is a remake of an older quest I was working on years ago called The Underworld and was completed in a little over two months. The story has been completely changed to a more simplified one and large portions of the overworld and dungeons have been changed, but it still more or less embodies the same spirit of what I was trying to accomplish back then.

Description
Darkside 66 contains a single overworld map with areas interconnected by a hub area called the Nexus. There are also 8 Triforce dungeons and a last dungeon that is essentially another hub interconnecting several other dungeon/overworld areas.
Story
The evil Stalfos sorcerer, Archon, has cast a spell on Link, banishing him to a false reality known as Darkside 66 in an attempt to keep him at bay, but Link wont give up so easily. He will find a way out at any cost.
Tips & Cheats
The old man in the sanctuary has some information you will find useful for beginning your quest.
Credits
See the included text file.

Posted 20 July 2020 - 02:31 PM
Beat this in about 8 hours and I have to say that this was one of the most bizarre quests I've ever played, but I had quite a bit of fun throughout. This is also one of the more unique quests on the database, and I really like the mashup of random ideas and different games with tons of references scattered everywhere which were pretty neat. Things weren't too crazy but some parts definitely stumped me at times.

I don't really have any major issues with the quest, though I do feel some way to keep block puzzle secrets permanent via a script or something would be extremely beneficial since I dreaded having to redo puzzles a lot of the time (even with shortcuts which did solve that problem with some of them). Another suggestion I have is to probably have some mention of sensitive content in the description or information somewhere since I came across one point in the Clone Bros area that really threw me off guard (as amusing as it was). Extremely minor thing but would be good to have. As for other issues I came across, I compiled them all into an imgur album which you can find here. The majority of the issues I came across seemed to be Hookshot related, so I would really go back and double check everything. Given how you can latch onto a ton of stuff in this quest, it's extremely easy to accidentally get yourself stuck.

Ultimately I had quite a bit of fun with this quest. It was certainly an interesting experience and I noticed you uploaded a sequel not too long ago so I'll be checking that one out too eventually. I'll give this one a 3.5/5, which rounds up to a 4. Good job!
No comments found!