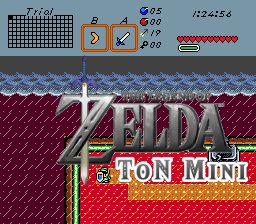 Overview Feature Quest
Information
The sole purpose of this quest was to get me into quest development but I made this with my eventual main quest in mind so nothing is random. I intend on this taking no more than maybe 2 hours since it is simply a small overworld and a dungeon. Scripting was minimal (more than expected to do) so there isn't anything super crazy here. I streamed a lot of the development of this quest on YouTube @Tytanium Joopy if you are interested in the development.
< >

Description
There is enhanced music, be sure to keep that in the same folder as the .qst

Here is the enhanced music link: https://drive.google...vCreamyl8aGNsOd
Story
Not much revealed, just a couple subtle and hidden hints of what my main quest will be.
Tips & Cheats
Get the map asap in the dungeon
Credits
Advisors and others that provided general help:
Venrob
ZoriaRPG
Dimentio
Lüt
Mitsukara
Moosh

Scripts:
Venrob
Moosh
Sorry if I forgot anyone else, feel free to message me

My friend Tytanium Man for some ideas

Posted 27 October 2019 - 02:38 AM
I really appreciate how you want to try ambitious things already despite this being your first quest. I love the dungeon layout.
This was quite the difficult miniquest. But it's still simple because of the length. I feel like the length works very well with the difficulty balance.
Overworld could use some more depth, but other than that, great attempt at a first.
I'm ready to help whenever you feel like you want to start making another quest!

Edited 10 October 2019 - 03:13 AM
Just finished your mini-quest in 2 hours 16 minutes with 20 deaths on my first run. I must say, this reminds me a lot of IoR Hero mode. I wonder if you were inspired by it. You certainly have captured the difficulty of IoR hero mode. It feels so natural and wonderful to play against - I loved it. It was especially difficult to figure out those skeleton enemies when I first encountered them in the fight for the hammer and I got a bit lucky that I stunned all three of them with the boomerang. Thing I hated most was waiting for my health to refill before a tough fight. I think that if you're going to have a health ring, if you don't get hit for, say, 30 seconds then Link should restore to full health instead of the player having to sit there and wait. The block puzzle in the dungeon was very nice. And you also know that the spikes in the dungeon are walkable right? If a player uses the flame from their candle to hurt themselves before stepping on them then they will not take any damage. Ask Evan about bomb-jumping in his IoR

If you need any help making this into a full quest I'm prepared to help you - I can script, test and advise. Just ask me via PM.

Posted 08 October 2019 - 03:04 AM
Nice. Sorry if I haven't been playtesting your newer versions. But I will be playing this one and giving you feedback.
Currently no topics are associated with this item.