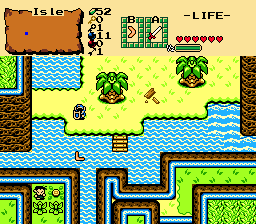 Overview Feature Quest
Information
This is a quest similar in approach to my other quests, like Yeto's Quests.
Without handholding. Exploration: areas, caves and dungeons are connected like a mini-metroidvania with many conexions, but also has a Zelda typical dungeon.
Tricky but beatable.
< >

Description
This quest took 3-4 weeks to be made.
It wasn't any serious. I made for fun and I was trying some ideas, but at some moment it became something bigger than I thought.

It's like a mini-metroidvania but I won't lie, follows the same approach of my Yeto's Quests and I would say it's even more tricky. Everything is interconnected.
It has actually some differences but is in the way I tried to design maps and only you can see it playing.
First minutes may remind you Breath of the Wild but with caves (my dream).
There are 1 overworld, 2 dungeons, one of them integrated into the main world, caves, etc.
It gives you some freedom, instead of the typical zelda structure, sometimes this is open-ended.

Tested and beatable but I'm looking for minor bugs. Polished enough to be playable.
I would appreciate all feedback and really hope someone can enjoy it.

Update #1
Fixes not essential but important in last dungeon, 1 key was a present, and minor things.
Update #2
A navegation bug fixed in a screen with rails, it's better if you update it.
Update #3
Added 1 Heart Container in order to do Gleeok easier (but if you explore). Fixed 2 bugs.
Story
It's start in a idyllic situation, your friends will play hide-and-seek and you have to look for them (yes, Majora's).

BUT then you realize there are some "invaders" in your homeland. For sure that a little girl doesn't hide herself too far....
Tips & Cheats
1.If you HATE ZC darkness I have a good new, you can choose a gift from the start (similar to Dark Souls) but game's design is just designed to be played without item gift.

2.Try don't waste all your ammunation if you don't need.

Posted 08 June 2019 - 08:19 AM
I'm a incredibly patient guy, and I am very understanding and open to new kinds of gameplay. But in my opinion every kind of gameplay needs two important things: consistency and logic. You can't just randomly decide that this mountain you can walk under just because you decide it to. There's nothing clever about it, there's no satisfaction with finding it because there's nothing to piece it together to make a "aha!" moment that should come with these types of quests. A Tribute to Yeto's Quest was great because there was consistency and logic behind it. Every mountain you could walk under even if there was no puzzle to be solved. It favoured consistency then just changing things for the sake of a cryptic solution nobody would guess their first time for the sake of people not guessing for the first time.

It doesn't stop with mountains, the rafting just felt unfun and just mashing buttons until I find progress. Also rafting in the dark... why? Not to mention it just feels weird landing and walking on water for the raft to work. The raft is too finicky of an item for what you're trying to do here.

Past that, this quest seems to be unpolished, I got stuck here and there and the layers sometimes didn't feel properly set up. I confess I didn't finish this, so my rating will be more fairer which is more precisely a 2.50/5. Your quest does have some neat ideas, and I see potential in this... "Yeto" genre, but I think Tribute quest was the only time it felt utilized properly (with some issues here and there). I think a lot of people including myself do "get" this genre despite what some may think, but I don't agree with the execution. Just because you have a invisible wall or bombable wall unmarked doesn't mean your quest is full of good secrets. In my opinion Z1 set the bar of how cryptic a quest should get, it seems people want to go beyond that point by making ridiculous secrets instead of clever ones. There's logic behind good secrets, you just need to look carefully at the bigger picture to see it.

Don't give up, I think Island of Yeto was on the right track with this being above Yeto's Quest. I think you need to properly look into the Tribute Quest to see what I mean about the consistency and logic. How the mountains are set up in Tribute Quest is a perfect example of what I mean, try walking under every mountain. It does not change how it works for the sake of a solution. Your small compact quests would be perfect for this type of gameplay.

Edited 04 June 2019 - 01:21 PM
If you love the obtuse, confusing gameplay of the original Yeto's quest or Island of Yeto, Hide and Seek is very much in the same spirit.

H&S has a number of improvements over the other two Yeto quests and is undoubtedly more refined than the first, but significantly smaller than the second. The quest description is correct to say that this quest does not hold the player's hand and gives little-no indication of what one is supposed to do at any given instant. In that fashion, the quest is indeed very open-ended and there are a number of ways to advance, find items to make things easier, or find ways to make the quest legitimately more difficult. Difficulty is pretty moderate in terms of combat, but of course, the real challenge of H&S is how to navigate, go anywhere from the starting screens, and advance further in the first place.

In terms of just figuring out what to do, H&S is moderately difficult and definitely not for the impatient or easily frustrated. Even if you are patient and thorough, progress can be very elusive at times. You must think out of the box and be prepared to try unusual things on every screen. Often times you will need to try things you might never think of: like bombing walls that have no cracks, finding a way to access isolated rooms from adjacent floors, or traveling through false walls that have little-no indication of being false walls. If you have played any of the other Yeto quests, or even the Tribute to Yeto's Quest, these dynamics and strategies should be familiar.

A little spoiler:
Spoiler
Taking the blue candle at the start screen will make the quest a lot easier, because you will need to extensively travel over an 8x6 map that is full of obstacles and almost completely dark. You can get the blue and/or red candles after the start screen, but not until you have already traveled all over the dark 8x6 map several times

Edited 02 June 2019 - 10:41 AM
This is a great adventurous quest to be a mini quest. I have the hookshot, ladder and raft but no flippers to swim. I'm assuming I need the big candle to get any further. I'm having issues getting that candle without the flippers. It's taking me more than 5 hours to figure this quest out.