What You Deserve: A 36-Hour Quest 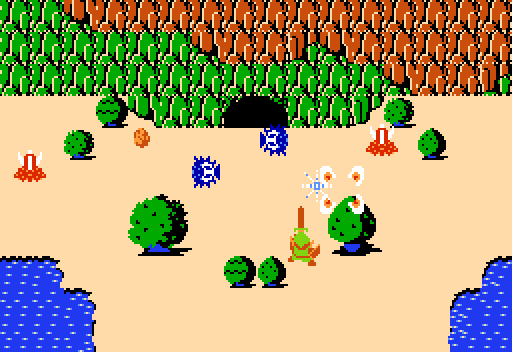 Overview Feature Quest
Information
WYD is a Classic NES-styled miniquest thing in which you travel through the outside thing to find the green thing, blue thing, and red thing in order to collect the 3 Triforce things to unlock the final thing, and possibly pass by a cave thing along the way.
< >

Description
This is an overhaul of a quest I made for Gouanaco's 24-hour Quest Contest. Naturally, that version had a number of rough edges and rushed areas, yet it turned out better than I expected, so I gave myself another 12 hours to revise it to (my own) acceptable standards. The new version has nearly twice as many items and secrets, large price reductions on previous items, more manageable high-level enemies, many visual design enhancements, multiple continue points across the overworld, a customized subscreen, and most of all, an expanded final dungeon that fits the progression of the first 3.

Conditionally, the quest was designed in 36 hours. Per the contest rules, resources such as tile sheets, music, sounds, and scripts were allowed to be gathered before the designing phase began. Then, once compiled, the countdown began. Minor malfunctions and other glitches were allowed to be fixed after construction, so long as we worked with what we had at the time limit. The 36-hour update followed the same guidelines, in which I finished all additional design in 12 hours, then corrected functionality issues and brief tile errors afterward.

The end result is a short and simple quest that features a slightly expanded classic-based tileset, a clear-cut 4-segmented overworld with 4 straight-forward dungeons, a story in which you go through things to collect things to open things to defeat things, a variety of characters that may or may not know more than one identical sentence, and traditional tried-and-true gameplay, all culminating in a climactic face off with Standard Ganon. Due to the quest's rushed production, you'll also find a few items / enemies / design themes / gimmicks rehashed from my first quest. Further, the quest features exceptionally Ben-tastic dialogue, as the contest was anonymous and it was suggested we spoof other designers' styles and gimmicks to confuse players.

...what, you wanted profound originality, groundbreaking graphics, sprawling dungeons, epic purpose-driven story, intricate character development, and fully scripted interfaces, all while forcing a 36-hour limit on me? Ha! You get What You Deserve.

This is a maintenance release that updates scripts to be compatible with newer versions of ZC, provides accurate transparency, adds proper pit functionality, tweaks some graphics and animations, improves certain item/obstacle interactions, and heavily optimizes file resources. No changes to gameplay or layout were made. Now requires ZC 2.53.0 R2 or later.
Story
Journey through the outside thing to find the green thing, blue thing, and red thing in order to collect the 3 Triforce things to unlock the final thing, and possibly pass by a cave thing along the way.
Tips & Cheats
If 1 = 1, then what do 2, 3 and 4 = ?
Credits
Graphics:

And of course, Ben / Bagel's Quest 447 for inspiring the rushed dialogue.

Posted 05 September 2017 - 11:12 PM
A bit on the easy side, but enjoyable overall. If you're looking for a classic quest to finish in about an hour and twenty minutes, this is it.

Posted 22 April 2017 - 09:03 AM
Probably will keep this one short since it's similar to the contest version and I have most of my thoughts there. However, this definitely felt better than the contest version, and it's nice to see the quest all polished up like this. I like what you done with the screen design in the overworld and the extra mountains really make things look cool. I still feel like the ice and fire areas could use a bit more detail, like a variety of ground detail or more rocks/trees or something but with the strict time limit, that's understandable and the screen design is good enough for me. Once again, dungeons are pretty nice and play very well. Difficulty in general was well balanced except for the Manhandla in the Green Thing which I felt was a bit too mean and probably could've had reduced damage for it being so early on. The shop prices being reduced, as well as more secrets, helped a lot as I had just enough money for everything and only had to grind for a little bit once. I assume the Final Thing was extended since I don't remember it being that long, but it was pretty nice too.

Also very easy and relaxing, if your the kind of player that wants to leasiurly go through quests without a lot of puzzles or difficult enemies then this is your quest.

Edited 15 April 2017 - 10:04 AM
Just some things I want to mention:
1. You went a bit overboard with this included textfile. I don't think much of it was needed. Where the music came from could have been added to the Credits section. The long lists detailing every rulechange and changes to enemies and items was nice of you to make, but really not needed. Instead, you could have just said: "Some enemies have been modified and there are some new enemies." People shouldn't expect the same rules and enemies in every quest anyway. Let them find it out on their own.

2. About those linked secrets. I don't agree with how they're used in level 1. If the dungeon was bigger, it would be a problem. For the player there's no way to tell what opens up after triggering a secret, other than revisiting every room and find out what changed. Again, the dungeon is small so it's actually fine here, but I'd prefer if there was some logic behind what opens up. For example, switches and blocks could be colour coded. Just something to keep in mind for the future.
Currently no topics are associated with this item.