Rite of the Storm 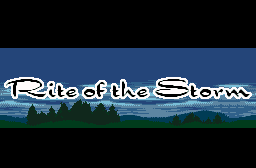 Overview Feature Quest
Information
Rite of the Storm is a miniquest made for the Random Theme Contest hosted by Jamian. It was built in roughly two weeks with a lot of Metroidvania elements in mind.
< >

Description
Note: Be sure to put the Rite of the Storm music within your ZC folder along with the quest!

Rite of the Storm is a miniquest made for the Random Theme Contest hosted by Jamian. It was built in roughly two weeks with a lot of Metroidvania elements in mind. Since then we have listened to community feedback and made a more definitive version of the quest! Here's a list of the changes: Minor and potential final update as of 16th of July 2018. List of changes and additions:
Story
A supernatural storm has plagued the world with death and destruction and there has been no light for decades. A young boy named Gale decides to investigate a labyrinth rumored to have connections with this storm in the hopes to find answers and perhaps a way to end the storm. Will he succeed?
Tips & Cheats
Credits
All credits are in the quest's credit sequence but I would like to give a few shout-outs:

Posted 11 November 2019 - 05:39 PM
A very nice neat little package, even with only one item the puzzles are so clever! The core mechanic is strong and new elements are introduced at just the right pace, and interactions between them are all very intuitive.
Though there were several puzzles that relied on waiting for an enemy's random AI movement to bring it into the right spot, and those could be a real pain (I had really bad luck on the one with a candle enemy in particular, and was waiting for several minutes), but otherwise the rest of them were all very satisfying to complete.

One other thing I would have been interested in seeing story-wise would be a little bit more of a look at that big storm they keep talking about. What's it actually like out there? They mention a lot of death and destruction, but we don't see anything outside of the dungeon. Something like that would only be optional extra flavor, of course, but extra detail like that could've made this nice neat little package even nicer and neater

Posted 02 June 2018 - 03:50 PM
Just finished the quest. I've already told this to Shane himself, but this is a masterpiece.
I'm going to break this down into a few categories: game play, story, and visuals.

The puzzles and upgrades, which by the end I am only missing one HP Upgrade were wonderful. I actually found the flight upgrade to be Overpowered slightly,but not too much. it was OP in the perfect way. The puzzles were well crafted and often kept me on my toes. Very well done you two.

Story: 5/5
With the soon arrival of RotS: 2, I expect great things and have many unanswered questions. without spoilers the ending left me wanting more. and It is definitely open to such.

Visuals: 5/5
It felt like a Gameboy game all it's own with really good tiles combined with the amazing soundtrack. the particle effects in a certain area were really well done too.

This quest is amazing in every way and I want more! great job Shane and Avataro!

Posted 28 May 2018 - 12:36 PM
Rite of the Storm is a fun quest with a a lot of positive stuff going for it. However, it does lack a little bit in being a little overly simple in several areas. That said, I am aware that it was made for a two week contest, so I am not letting that affect my rating.

Areas:
The areas are a mix of standard and creative. You have the Polar Ruins and Sunken Desert which are your ice and desert areas. And then you have other areas like Hall of Mirrors and Burning Facility which were more creative. My favorite is the Wildlands though which is a nice combination of forest and creativity. I would love more creative areas in the future.
4.5/5

Difficulty:
The biggest issue for me with this quest is that it was a bit too simple in my mind. Granted I do appreciate that as I prefer simpler things over things that are overly complex. However, the enemies were simple and the puzzles were as well. I never really felt threatened.
4/5

Gameplay:
The gameplay is reseblant of a metroidvania but doesn't quite do as much as it could do with interlinking the areas. Although I mentioned things being a bit too simple, I do think it makes up for it in this area with some creative gimmicks.
4.5/5

Upgrades:
The upgrades are pretty simple but offer you a feeling of progression that works well. I love that there are upgrades for each attack, defense, health and magic as well as for your weapon. It's a shame that you don't get more to do with the last upgrade you get.
4.5/5

Bosses:
The bosses again are a bit more simple than I'd prefer. But in this case, I don't really mind. They didn't stick in my mind very long, but the Caelum fight was quite enjoyable. So while I'd love to see improvement in this area, I don't mind as long as the bosses are creative and enjoyable.
4/5

Story:
The story is pretty simple, but the characters are well done and the little twist at the end is nice and gets me interested in hearing more about the Rite. It was a solid foundation. Now I want to see what you build on it.
4.75/5

Enjoyment:
Despite the things I said, I think this quest was quite enjoyable. For some reason, it didn't compel me too much to go find all the upgrades, but it did keep me interested throughout the main quest and I did go back and get some of the upgrades.
4.25/5

Overall:
While the quest is quite fun and doesn't have any major faults, it does suffer from just being a bit overly simple. Which I feel is largely because of the time restraints. However I think this a good start and I imagine making and finishing makes the creators proud, as it should.
I'd give this a 4.2-4.3/5. I'm rounding it up to a 5 instead of down to a 4 cause I feel it deserves it for only lacking in some personal preference areas dealing with simplicity.

Edited 10 December 2017 - 10:58 PM
Loved the use of environmental puzzles in this quest! Palettes, graphics and music are all great! Feels like a Capcom NES game. Dialogue has good personality. The main idea in this quest is to find levers to lower barrier posts you encountered earlier, and that was tricky for me to remember where the last barrier post was as there are quite a few. Got stuck for a little bit a few times, but the map is helpful, as is remembering to solve certain puzzles later in the game. One or or two clues/item descriptions might have been nice, but I managed. Last item is cool, but would have liked to see it get more use. Sometimes you have to try a few things out to solve a puzzle and discover things you didn't know your items can do. Definitely recommend playing through this!

Thanks Australia and Europe for this quest!

Posted 20 October 2017 - 09:47 PM
This was so fun,the funny part was how all the tornados broke the sands blocks XD and the sad part was the Caelum's death R.I.P.
I like this Quest *TATATATAAAA* [You win 5 Ratings,Yay!]
And I like it the ideas of Elicopter and explode the bomb with fire tornado and FlyPolar too

Edited 24 July 2020 - 03:45 PM
It took 3 years, but the Rise of the Storm saga seems to have concluded. Again, thanks everyone for their years of support, we hope you look forward to a potential commercial version.

I did double check every place i did visit and i didn't find any clue that helps me with that puzzle or at least a path.

Posted 19 February 2018 - 08:15 PM
I finished this and got a password about bitter fruit at the end. From my perspective, the quest was too easy and there were too many puzzles. I mean the boss fights are easily beatable on the first attempt without any knowledge of the boss and without practising on the boss.

Some of the puzzles didn't really make any sense and I had to look at a walkthrough to see how they were done. For example, the maze path has a solution on another screen miles away and the hint that is given implies that the solution is on that screen hidden from view. There was also the raft where there is no hint that you can move on the raft by shooting your weapon.

I just don't see any point in having puzzles like you do. To me it is tolerable but not really any fun. They are a kind of hmm...errr...meh...blah... sort of things. If I were to rate this quest it'd be 1 or 2 stars at best but I know that this quest was written for the type A taste and culture and that this wasn't intended to appease type B players. And you guys certainly did appease your target audience so congratulations on that. 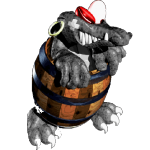 Posted 11 July 2017 - 12:02 AM
I finally decided to try this out. I am in the second to last area, and it's really solid so far. I really enjoy the way the central mechanic is used throughout the quest, and the puzzles are very unique. I'm not a huge fan of the red/ blue pegs, but that's a minor complaint. I'll try to write a real review when I'm done with pros, and cons and all that. All in all, great work so far, guys. I hope to see how you improve in the future