Report The Legend of Zelda: A Hero's Epilogue 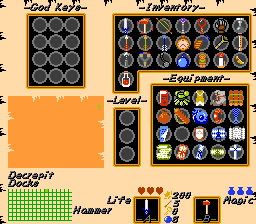 My very first quest, and a long one at that, The Legend of Zelda: A Hero's Epilogue is a an epic quest inspired by the NES original, as well as ALLTP and the Minish Cap.

*IF YOUR INTERESTED IN BETA TESTING/HELPING WITH SCRIPTS, DESIGNS, IDEAS, OR ANYTHING ELSE AT ALL PLEASE FEEL FREE TO SEND ME A PM! I AM ALWAYS HAPPY TO ACCEPT HELP AND TAKE ADVICE!*

Tools and Equipment (List) The Overworld (Areas and Locations) The Overworld (Concept and Style)
Explore a vast Overworld whose layout and style are inspired by the Minish Cap, with each area of the map having not only a distinct feel and environment, but unique gimmicks as well in regards to how they are traversed and explored. Use your Bow and Arrow to traverse a dusty red mesa, Hookshot across a chasm filled canyon, light the way through a dark cave with your Candle, or melt the ice covering the entrance to a frozen tunnel.

You may not be able to enter the 5th or 6th dungeon right of the bat, but that doesn't mean this quest is entirely linear. At many points in your adventure, you will have multiple options of how to go about completing your quest, and the order in which you complete the next few dungeons. You may be unable to beat Dungeon 5 before Dungeon 3, but you can still beat Dungeon 4 before Dungeon 3 and 2, or Dungeon 6 and 8 before Dungeon 5 and 7.

MAIN DUNGEONS:
The Dungeons (Concept and Style)
Throughout your adventure, you will explore a grand total of 13 dungeons, composed of 9 Main Dungeons and 3 Mini Dungeons. Each Dungeon contains its own special gimmicks, puzzles, and themes. No two dungeons are alike.

From a quest makers perspective, each dungeon can be thought of as self contained experiment/test wherein different forms of puzzles, skills, and scripts are implemented and explored by the creator (that's me) as they learn more about the program and become more skilled in using it. One dungeon may be made to explore the style of a classic NES dungeon, while the next may be created to explore the ways Tiered Secrets and a scripted mine cart system can be used in making puzzles and bosses.

From a normal perspective, each dungeon also has clear themes like normal Zelda dungeons. A dark catacomb containing a magic lantern to help light up dark paths and burn away Gibdos. An ice filled cavern with melting walls of ice. An old tower with magical pillars of light that must be reflected with a magic shield. A sand filled temple with rivers of sand that only relent to those moving at great speeds. All of these and more will be found within this quests many dungeons.

Each Dungeon contains a challenging boss, at least one item, and plenty of secrets, puzzles, and pathways.