I know there were a bunch of bugs I missed fixing when I released the first demo. If you find any sort of bugs or errors in the demo I have presented, please tell me what and where so I can fix them ASAP as I want this quest to be enjoyable to all. Enemy count and choices count to this as well in my eyes. Dungeon puzzles and length count too. Thank you.

Hey, so I've been playing this and generally enjoying it. I have a couple things to say so far, but first, I've been into level 3, and across as much of the overworld as I think I can explore at this point (got the hammer), but I can't seem to find the arrow item anywhere? Got the bow, but I'd like to finish as far as possible before saying anything, so any pointers?

Hey, so I've been playing this and generally enjoying it. I have a couple things to say so far, but first, I've been into level 3, and across as much of the overworld as I think I can explore at this point (got the hammer), but I can't seem to find the arrow item anywhere? Got the bow, but I'd like to finish as far as possible before saying anything, so any pointers?

In the room where you get the bow, there is an odd block marked by a different sand tile. Find and push the block and you will find the arrow.

Anyway, I seem to have gotten as far as I could.

Which isn't much farther than my last post, but regardless, some thoughts so far.

I generally liked most of this. Pretty good layouts for classic. I like how you've clearly got mountain cliffs and forests and beaches and islands, etc. in the overworld. It's nice distinction even without changing palettes. Seeing more than tiles and blocks in dungeons is always good. And level 3 uses my favorite dungeon palette, so automatic +1 star.

Now, going through this, I had a couple suggestions and comments, and possibly bug catches. 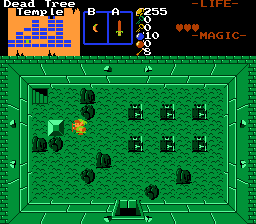 Here you've got a pushblock, which is all well and good. But you've also got a power glove under one of the Armos statues. Did you mean to make the pushblock a heavy push block? Because if people go to the room, see an obvious push block, but can't push it, then it's good incentive to check under the Armos statues and find the glove. 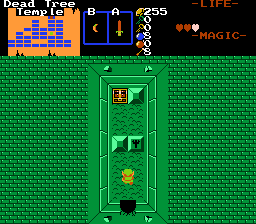 I like these non-traditional rooms, but they'd look better with proper wall arrangements (brick detailing). In this case, the vertical walls are the same size as any of the other vertical walls in a standard dungeon screen, so they'd look much better if they matched. I know the default dungeon-wall combo list is a clusterfuck, but if you hold alt and click, you can select a combo from one screen, move to another screen, and place it in the right spot. I've done that a few times to copy complicated shapes before, especially when I started making freeform dungeons. Of course, if you build the dungeon walls into aliases, you'll only ever have to bother with arranging the tiles once. 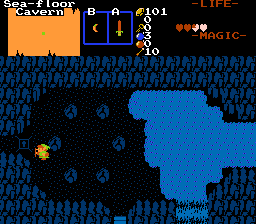 You've got a lock block in this room, but because the cave palette blacks out one of the main colors, you can't see that it's a lock block until you collapse it. I'd suggest making another combo with a tile that recolors the lock icon at the center of the block. You know, fill it in with one of the blue shades so that it's actually visible like it is when it's collapsed (as in the screen). 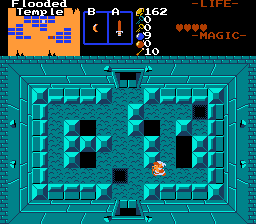 The block puzzle here is rather odd. There's a number of places you can't push these blocks, but those places aren't marked in any way. I assume it's to prevent players from trapping themselves, which is nice, but we need an indicator of the push limits, because there were a few blocks I thought were only one direction, when they were actually multiple directions, because I couldn't push them onto certain parts of the floor. Speaking of which, indicators as to what directions the blocks can be pushed would also be useful, because right now it's completely random. And then you have a block to the right of the center (2 tiles above Link in this screenshot) that's marked with flag 55 (up, once), but there's an unmovable block directly below it, so how can anyone possibly push it up? Finally, missing undercombos. 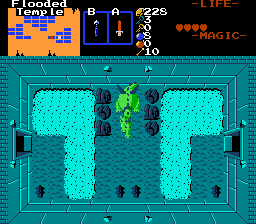 This one's pretty strange. You don't have any kind of lock on the door leading to the boss here, nor do you have any kind of shutter blocking the way to the Triforce room. The screenshot is exactly as it is the moment I walked into the room for the first time. I could just walk right by the Gleeok and get the Triforce. I mean, I didn't - but I could have. 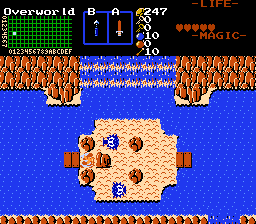 I notice most (possibly all?) of your push rocks on the overworld use the "push (wait)" combo type. First, this is highly unusual, and most people will walk right past a number of secrets or other entrances because they won't be expecting to have to kill all enemies to move the rocks. But more importantly, you get scenes like this. It's fine when you approach from the right, but when you approach from the left, you can't reach the enemies to kill them. The best you can do is stand on the top half of the tile and stab rightward until they run into it. Possibly bomb them too, but it seems a waste of bombs over a thing like this, and we don't get the bow and arrow until after this either. 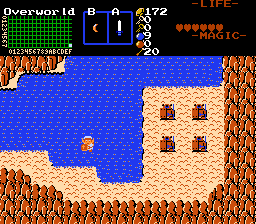 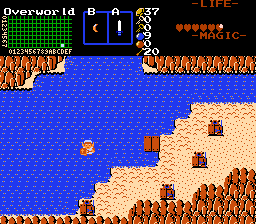 Next, you've got some warp return issues. As in, these two don't exist, and drop me in the middle of a deep water lake with no other option than to continuously drown myself until I restart.

And then a couple general points.

First, no-enemy flags. You've got a lot of areas where enemies get in the way of playability or progression. Some flag-96/97 usage can help alleviate this. They're minor issues, so I'll dump them in a small spoiler: 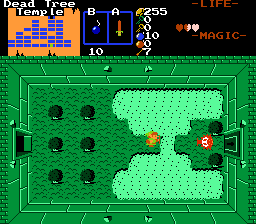 You're supposed to kill all enemies in this room to drop the key between the trees, but when this Octorok spawns across the water, you have to exit and re-enter the room to (hopefully) spawn it in the reachable area. 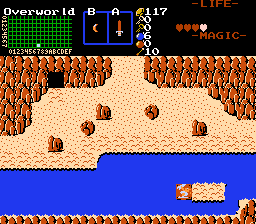 When Leevers spawn on this little area, they immediately knock me back onto the raft and send me sailing 2 screens over. 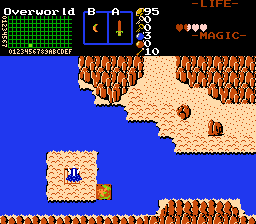 Similar problem here, and additionally, they look awkward emerging from or sinking into stairs. 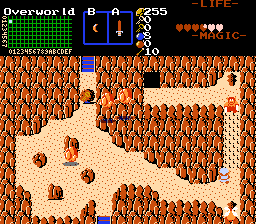 It can take a long time for this Lynel to get out of the way of the hookshot.

Second, you've got a lot of missing undercombos, and perhaps even some secrets. More minor issues, more spoiler dumps: 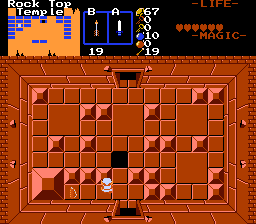 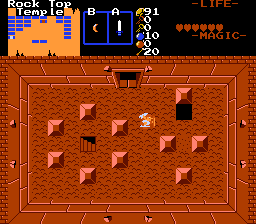 Those are probably just visual glitches, but... 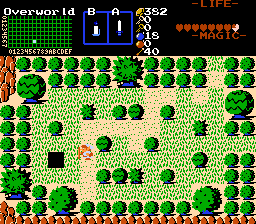 ...this looks like a broken secret, seeing how I had to burn a tree to access it.

Third, here's an issue that you didn't cause, but have to account for anyway. 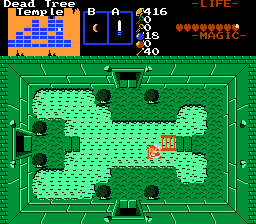 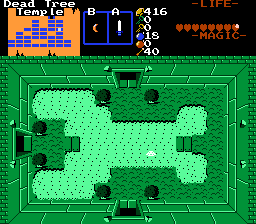 I attempted to sail off this raft dock. I ended up triggering the ladder instead. I was then able to walk that far off the ladder before drowning and restarting at the door. 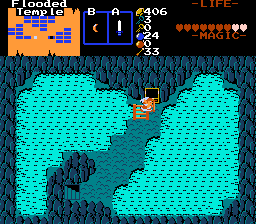 Likewise, the thing triggers in every odd spot where you even come close to water.

8-way movement is terrible with its 1x1-pixel-precision, particularly when it comes to rafting, and drownable water is just terrible in general. To that extent, I would suggest reconsidering the drownable water. It might be more tolerable if didn't suck Link into it the moment he gets his toe wet, but as it is, nearly half the challenge in this quest comes from not drowning. The ladder then becomes one of the most threatening items in the inventory. I don't doubt that ladder + 8-way movement + drownable water is a skill that can be mastered. I just don't think it's the one you're aiming for here.

So, I know it's not a critique to level at you as a designer. You've just bumped in to a terrible combination of mechanics that is in no way your fault, but will impact your gameplay and irritate many players regardless, so it has to be considered regardless.

Fourth, two gameplay points. I felt the difficulty was fair and balanced and progressed at a steady ramp as the quest went on, with two exceptions. In the forest, the massive amount of grass reveals so many hearts when cut that I was practically invincible while wandering through it. Similarly, I was able to max out my rupee count before even finding where I was supposed to go. You may want to reduce the amount of grass item drops if that's not the effect you were going for (I'd say double or even triple the nothing chance for the grass drop set). By contrast, all the falling rock screens at the northwest... good lord man. Those things aren't a challenge, they're just a largely unavoidable nuisance, especially with how narrow some of the pathways get. Worst of all, a lot times you automatically get hit the moment you move down from one screen and enter the top of the one below. I suggest either 1) significantly reduce the amount of screens that have falling rocks, or 2) reduce the number of rocks per screen. I just saw Eddy make screens with only 1 or 2 falling rocks in AR3, so it's definitely possible to change that number, and you may want to build from single rocks to double rocks and finally to triple rocks as the mountainside journey progresses.

Fifth... I honestly have no idea what's going on after level 3. 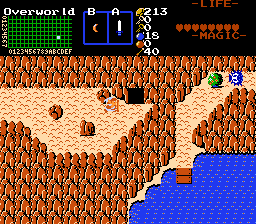 ...you've got this awkward tree trigger that requires, of all things, the magic boomerang to destroy.

Behind it is the flippers, but wait... the magic boomerang is located in level 4, which can only be accessed with... the flippers.

I've spent far more time than I intended browsing through the quest file to see if I could find some path to level 4 that doesn't require the flippers, but I'm completely lost.

And the bow & arrow didn't seem to serve any purpose after level 3 either? If there was some kind of overworld trigger it activates to open further progress, I completely missed it.

Finally, I have no idea where to stick this, so I'll just dump it at the end: 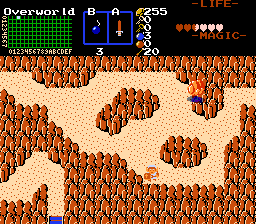 So yeah, despite all that, I really did like this, and look forward to a touched-up and fully functional final version.

Alrighty, thank you for the massive overview. Many things have already been changed. The bush with the magic boomerang flag was basically a demo end marker. Some things are already different from the demo as well. Enemies will be flagged on many screens and rocks will be reduced significantly, I will see about widening some pathways if I can. I will adjust the item drop percentages for grass and maybe change what gets dropped where. The block puzzle in Level 3 will likely be changed before next release as well, if not, removed and replaced with something else. most under combos mentioned have been fixed, but I will go back and look for missed ones. As for warp returns, they will be fixed as well. I may consider dropping 8-way movement as well, due to me also having annoyances with the ladder. Tile errors will be scanned for and fixed as well.