22 replies to this topic

Here's a thread where you'll be able to share your own opinions on whether you think a certain Zelda game deserves to be placed high (S rank) or low (F rank)!
Using the link below, create your own tier list of every Zelda game, and be sure to post it here when you think you're finished!
https://tiermaker.co...all-zelda-games 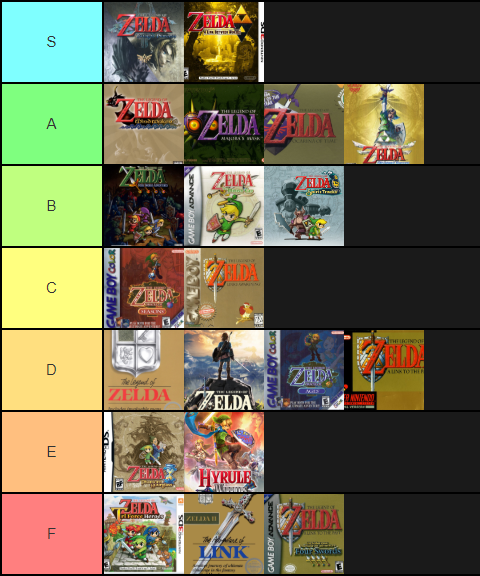 Oh, and feel free to ask any questions on why people chose certain spots for Zelda games! After all, this is a discussion thread!

Here's mine! Majora's Mask cannot be beaten in awesomeness! Eh sure, why not give in to the current trend

There's mine. Seems a lot of them have kinda piled up on the C tier, started to get pretty hard to decide from there. 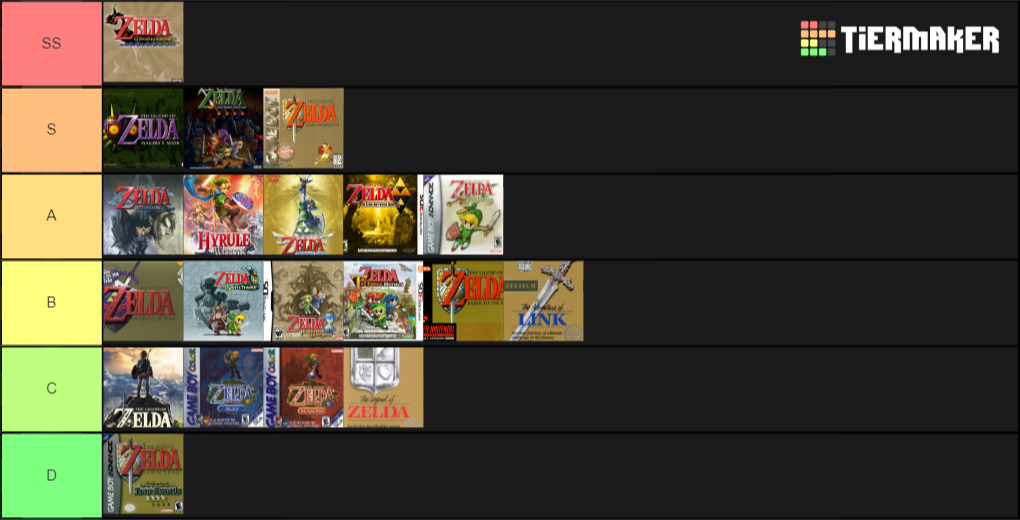 Huh. That was kinda fun. Harder than I thought it'd be. Really unsure about the exact ordering of the stuff in B and C; it's just been too long since I played a lot of them. 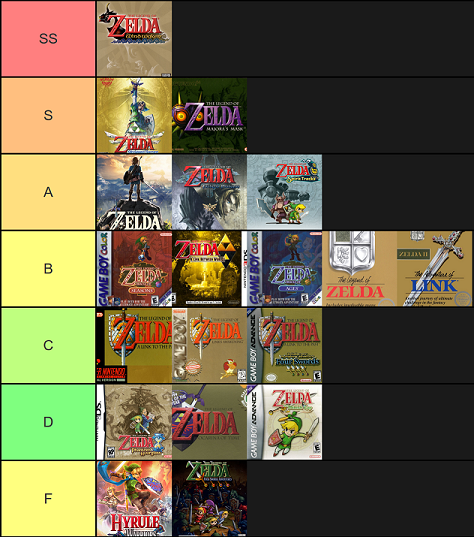 General trends I predict seeing here:
- OoT and LttP will be ranked highly.
- PH will be low on most rankings.
- BotW will be among the most polarizing.
- WW and MM will generally be near the top of most lists, albeit with MM being ranked closer to the bottom in about 1/4 of them.

Edit: I typed this up before Eddy and Dimentio posted. I think it proves some of my points.

Decided to throw in my choices. I will add some commentary on why at the end. 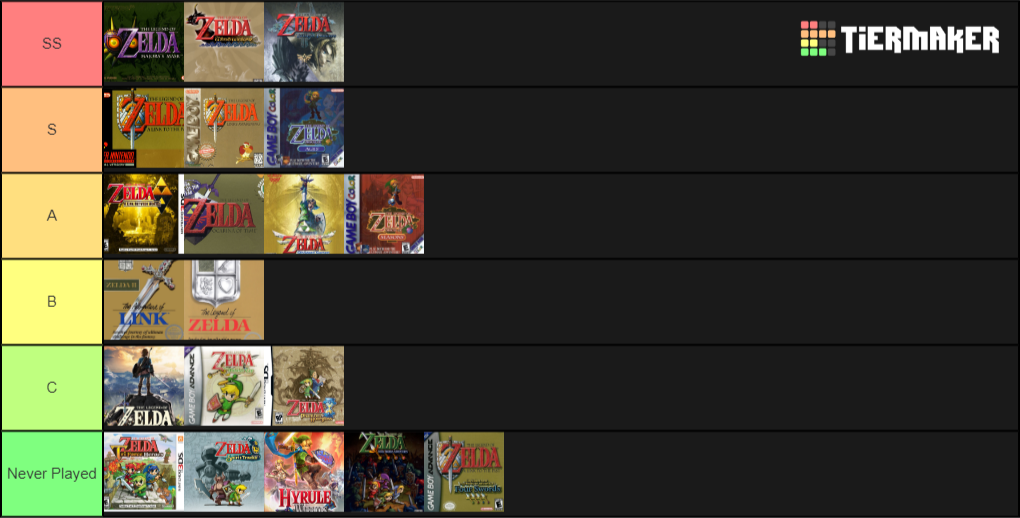 So, why is BOTW so low you may ask? Or the Minish Cap?

While it had stuff to do; the story felt tacked on and empty.

The combat was also far harder than most Zelda games and had the added downfall of leveling up the enemies as you do; but not actively telling you that it was doing that. This led to several situations where I had to do things the hard way just to get by.

As for the Minish Cap... I hate Ezlo. That's it. Nothing else about the game really bothers me as much as the blabbermouth hat who spouts unskippable hints to do things every Zelda player would already know.

As for my top 3; all of those captured the "explore a huge world and find tons of secrets" feel I want from Zelda.

Skyward Sword was good, but the motion controls were nowhere near as good as those in Twilight Princess.

Plus, I loved the stories for those 3 games more.

In the end, I guess while I like interesting gameplay; I would rather have a good story and a great game to play in.

If there are questions about any of my other choices, please ask. 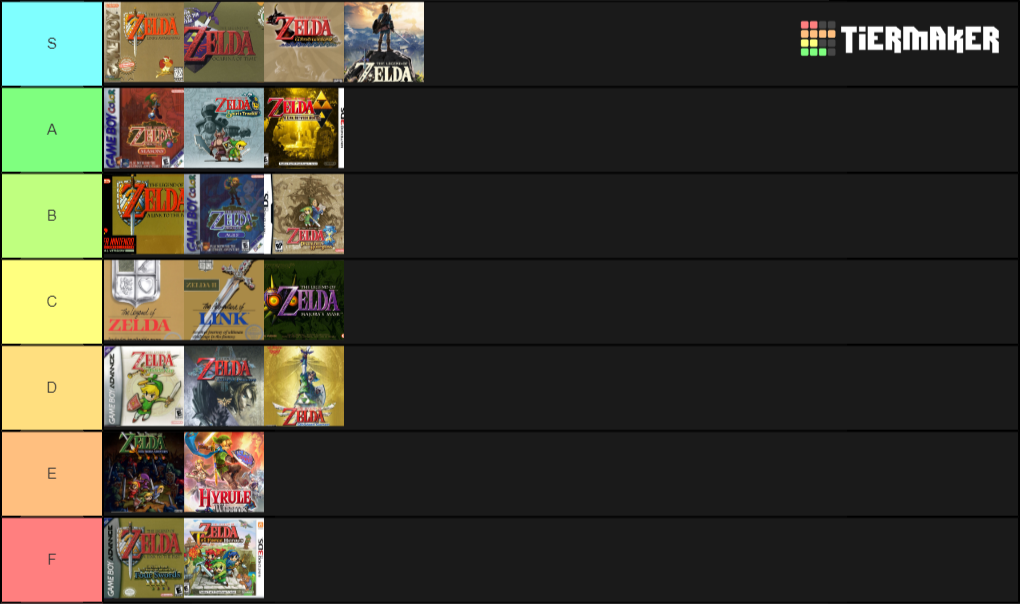 I find this idea lot more liberating than a straight-up ranking of the games. Putting a game in a general range of how much you like it versus giving it a definitive spot in a list is far more representative of how I feel about these games. Even then there's still some nuance lost, but it's an improvement.

Also I left out Hyrule Warriors because it's not a Zelda game. I know there are official Zelda games that have their own variances from the formula (i.e. Zelda 2, Four Swords, and Tri Force Heroes), but Hyrule Warriors at least markets itself as a spinoff. Plus, to be quite honest, I don't know where I'd put it on this list anyway.

To be honest, Zelda 2 and Skyward Sword are ones that could potentially also be in C-tier. For Zelda 2, I dropped it to D mainly because of its occasionally-lopsided difficulty and how unfun palace navigation could be. For Skyward Sword... it's mainly because the overworld is so bad even though I love the dungeons. And yep, I like Four Swords Adventures about as much as the N64 games, I'm that weird. Sorry, though, I don't really like anything Capcom's done with Zelda... 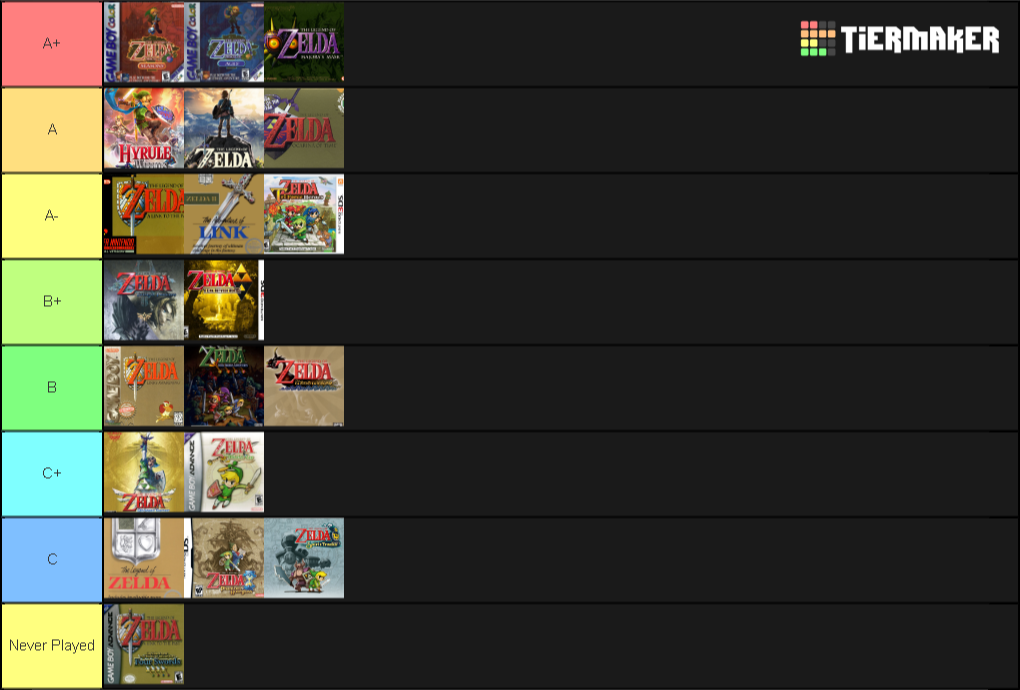 Here's the most controversial one ever. 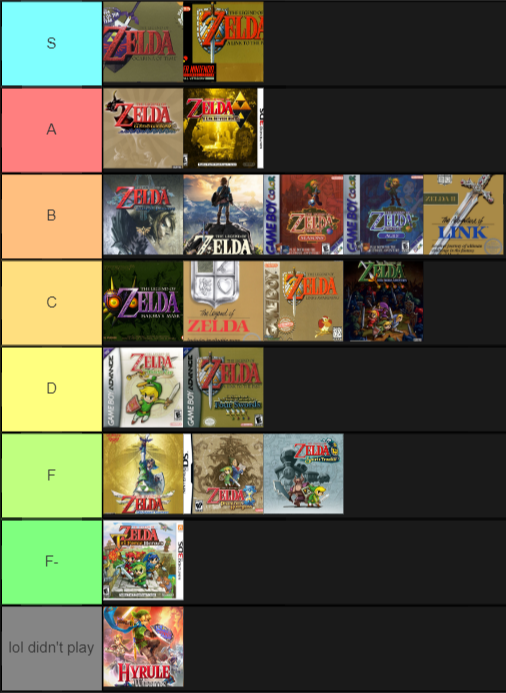 I wasn't really feeling it, but then I realized I'd probably put the Four Swords games too low. Banishing all the control gimmick focused games to their own tier was the most satisfying feeling.

The ones under ??? I either haven't beaten or can't confidently rank. 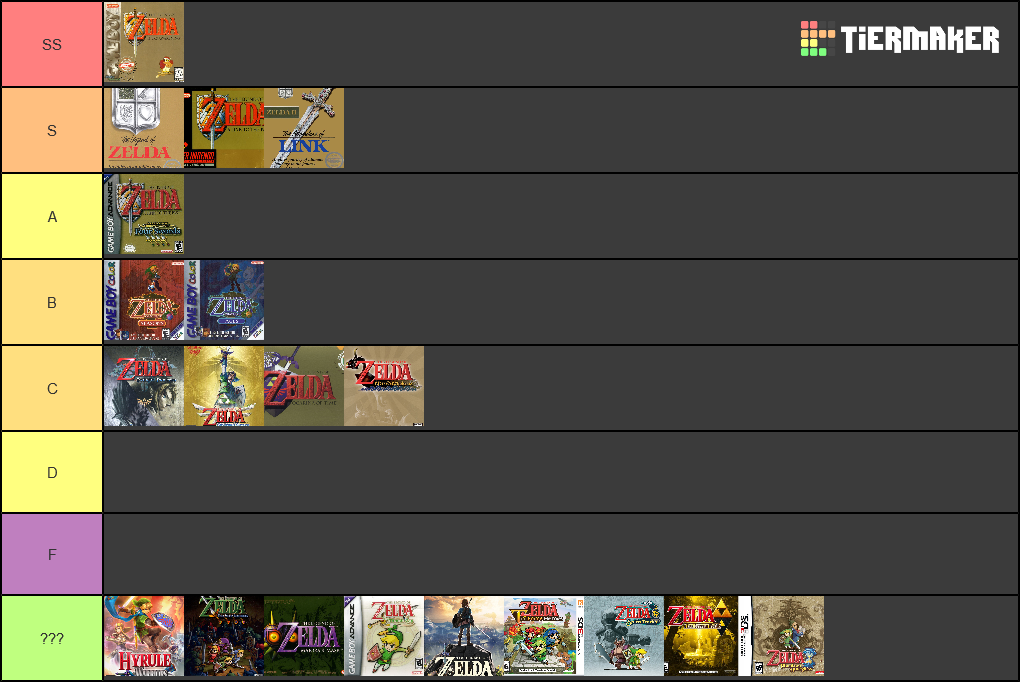 the legend of zelda is a bad video game series 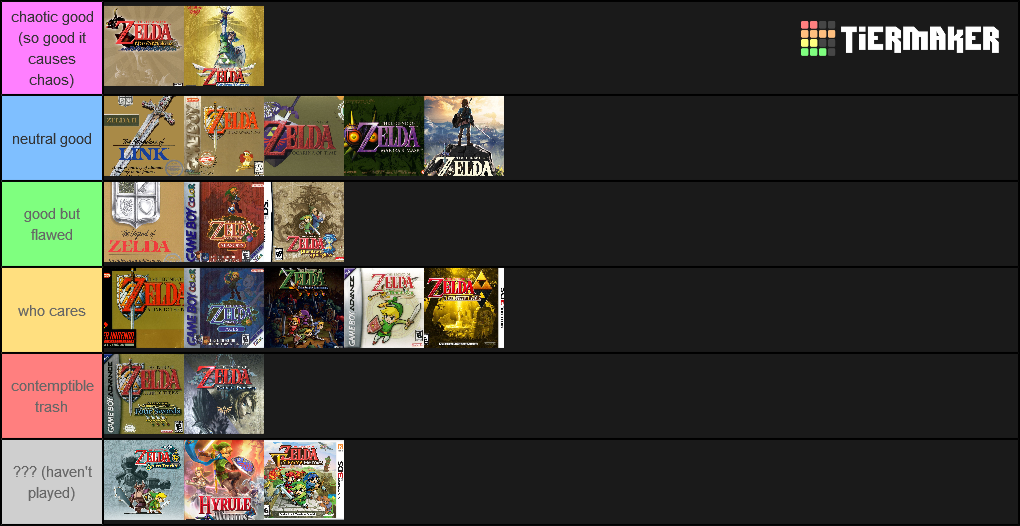 defending some of my opinions:

- twilight princess fucking sucks. i tried replaying it recently and it never occurred to me how braindead it is or what a pallid imitation of zelda it is. the overworld content is sandwiched by sloggy fetch quests worse than anything in skyward sword or wind waker at their worst moments WHAT IS FUN ABOUT WALKING UP TO NPCS AND PRESSING THE A BUTTON AND THEN JUST GOING BACK AND FORTH WHERE IS THE CHALLENGE WHY DOES THIS GAME HAVE SO MUCH OF IT WHY WHY WHY IT'S SO BAD, the area design is miserable and uninspired (people compare BotW to skyrim but honestly this game deserves the comparison more on account of it's flat, devoid of content and horribly unfun), the dungeons aren't even as good as i remember (maybe i'm spoiled after playing skyward sword with its frankly impeccable dungeon design but good god gurdy twilight princess has a lot of dungeons that just don't need to exist) and the only cool part of the game (the items) are underutilized and pointless -- for god's sakes at least sometimes you have to REUSE OLD ITEMS in skyward sword but in TP you're given this dope ass BALL AND CHAIN or WHOAH IT'S A ROD THAT ALLOWS YOU TO CONTORL ARMOSES BASICALLY or WHOAH COOL ASS SPINNER THING and the game's like HAHAHAHA FUCK YOU JUST KIDDING BITCH SUCK MY ASS YOU DON'T GET TO USE THIS EVER AGAIN. the idea of a zelda game with a dark moody aesthetic is cool but TP verges on tryhard edgy and their idea of something oozing with twilighty darkness is to just suck all of the color out of everything and add a bunch of 2006 meme bloom. ALSO PEOPLE COMPLAIN ABOUT THE OCEAN????//// this game is just land water!!! but with less stuff in it!!!!! holy fucking shit there's no water there's no SAILING where you can at least be lazy gotta hold that contrlo stick forward mmmm delicious hold up gameplay walking simulator my favorite oh also THIS GAME IS PISS EASY. i don't expect a lot of difficulty from a zelda game but holy shit this game is pathetic and the first time i played it at age 15 my underdeveloped feeble mind didn't die once. not once there is NO. CHALLENGE!!!!. anyway it's seriously one of the worst games i've ever played and the difference between how i felt about it at age 15 and how i feel about it now was kind of jarring tbh

that's about all
also midna is cute i guess

My spread is fairly small. When it comes to Zelda games, I tend to either like them or really like them. On the whole, I seem to prefer older titles to ones in a more modern style, but Breath of the Wild blew me away.

Back to Gaming and Entertainment