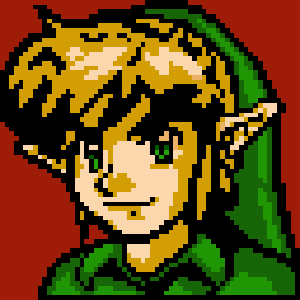 Samson is Link's rival and the main antagonist of TRIFORCE. Many of you have only seen him standing beside Link in the image that's included in my signature.

(Credit to Demonlink for img)

He originally only appears as a shadowy figure walking around in the earliest demos of my quest. Many npcs in this world show a deep admiration for him because of his kindness and likable traits, and he's revealed to hold some persuasive power in the world Link finds himself in. In more recent demos he finally makes his grand reveal, showing a dislike towards Link.

TRIFORCE from its humble beginnings was designed to be a joke quest in the similar manner of Link's Quest for the Hookshot 2, which I admired for the freedom of expression his quest had in its storytelling due to it being unrestrained and able to implement whatever absurd story concept Moosh could squeeze in. During this time, I had also taking a huge liking for The Legend of Zelda: A Link Between Worlds, which is also another game that inspired TRIFORCE's design.

Samson is heavily based on Ravio, who I believe represents the polar opposite to the traits that the series have repeatedly highlighted in its major protagonist Link. These traits being Power, Wisdom, and Courage. Traits Ravio clearly did not have! Samson, like Ravio, is best described as weak, foolish, and cowardly.

I wanted to explore the Ravio concept further by making a very similar character, and placing him as lead role as the game's major antagonist.

Samson is also a little bit of a self insert of my most foolish and absurd ideas. Every time I thought of something absurd to add to the quest, he is usually involved somehow.


How Samson Became so Important for TRIFORCE:

How can I put it this way? Without Samson, there is no TRIFORCE. Being a self insert for my most creative and absurd decisions, the entire game's plot and world-building was built from the ground up around this ridiculous character: I created New Hyrule to be the best setting for Samson; The world's populace is a little less friendly than Hyrule, because I wanted to make clear Samson grew up in a very different Hyrule than Link; Some locations and dungeons were used to explain Samson's absurd feats and accomplishments; The entire plot of the game is centered around Samson's backstory, and his hero's journey.

In an ironic sense, Samson is both protagonist and antagonist of this story. Link is what he's always been, a silent protagonist used for the player to get immersed into this world, but this is not Link's story, this is Samson's story. It's Samson who must face the hero's journey in his own unique and absurd way, and Link must eventually defeat him to see this truth in himself.

To be honest, I have no idea why I settled on the name "Samson". I did want a name that felt like a juxtaposition to Link. I wanted Samson's name to feel plain, uninspiring, and unintimidating. Samson was just the first name that came to my head that felt silly enough to work, and it stuck ever since.

During this time, I had not known Moosh much. He was developing Link's quest for Canada. I revealed to him that the TRIFORCE's main antagonist's name would be Samson, and he found it humorous that Samson was also the name of his quest's main antagonist, and that got into a discussion of "I'll show you mine if you show me yours". Moosh has since been great online friend and acquaintance, and he's contributed heavily to the development of this quest. lol

Samson appears almost identical to Link. However, he's not an identical copy. His personality gives him a much more exaggerated body language and facial expressions than Link, who is mostly lacking any personality at all. Samson has a different eye color than Link, being green as opposed to Link's blue eye color. His hair is also different than Link, which appears a little more messier due to very slight curls as opposed to Link's straight hair. Samson also has very defined and thick eyebrows which is the most noticeable difference in both character face frame and in-game sprite.

Samson is weak, cowardly, and foolish. But this doesn't make him dumb. In fact, Samson is revealed to probably be one of the most intelligent characters in the game. Samson's heritage does give him the traits and talents that make him very suitable for the role he fell into in this game's world. While he self identifies as a politician, Samson is still too young and foolish to have the wisdom and comprehension to fully grasp the responsibilities of his self identified position. What he does have though is an incredible ability to persuade people around him, but his actions throughout the game eventually makes him more of a controversial figure.

He is a very talkative and hyper individual who shows a confident front. However, he's prone to sharing his true anxieties and worries in journals which often reveal the true motive of many actions he's taken throughout the game. He frequently changes topics because of his lack of attention span, and sometimes spits out trivial nonsense to entertain himself before getting back on track to discuss events.

He is prone to do outrages and impulsive acts, because to him, the ends justify the means. He often creates shortsighted band-aid solutions without seeing the long term consequences of how his actions do affect other people and their perceptions of him.

Samson does not get along well with Link, nor does he like or trust Link. To Samson, Link is an uninvited wild card to Samson's isolated and perfect world (or at least how he perceives it when the player first encounters him). This is not Link's world, nor is it Link's story, and the presence of Link causes Samson to lose a lot of his composure and showboating he's originally depicted with when you first meet him as the player. Link's appearance in this world though is very important for Samson, because Link is the wild card Samson needs to begin his destined path.

Samson is very intelligent, and knows how to always be a step ahead of his opponents. His combat prowess though is highly a mystery and nobody truly knows how strong or weak he is, especially since he hasn't been given the true opportunity. Since he's never fought in his life, nobody knows (not even himself) what he's capable of.

Even though he is perceived to be weak, Samson has proven many times to be resourceful, and will use that to his advantage to either evade or outsmart his opponents.

Samson's good luck and an incredible ability to influence others also gives him a lot of political protection, making it extremely difficult to even meet Samson alone. Because of this, it is very difficult for Link to face or confront Samson during his quest.

Samson's backstory remains a total mystery. However, it is highly speculated he is a late migrant from a Lost Woods settlement, which is the first settlement in Hyrule that many people have already abandoned due to the poor living conditions there. Samson has clearly had a troubled past, however he keeps most details of his life to himself.