Apologies for the huge delay. We got very late entries and last month was really focused on personal life stuff. But we've got three, really cool entries that are definitely worth the wait! 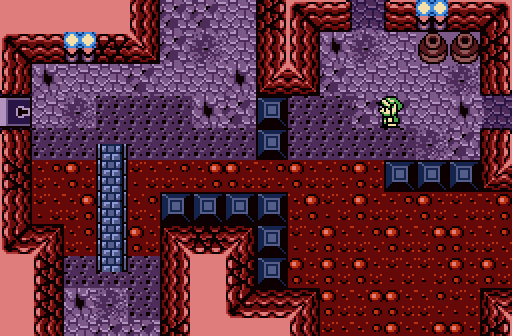 I've attempted to recreate Turtle Rock's aesthetic, while revamping the dungeon structure as a whole! 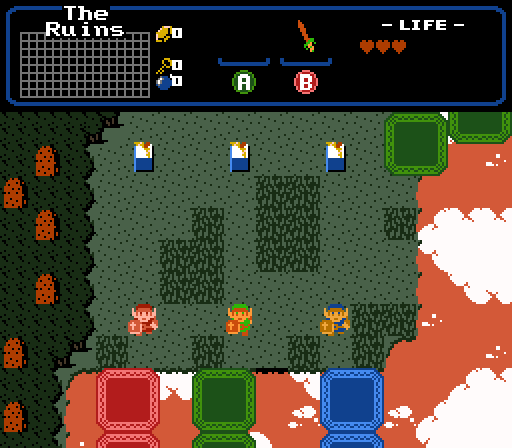 Attempting to recreate the look of The Ruins from Triforce Heroes, in Cambria.
It has some issues, but I wanted to give Shane enough screenshots to continue the contest. 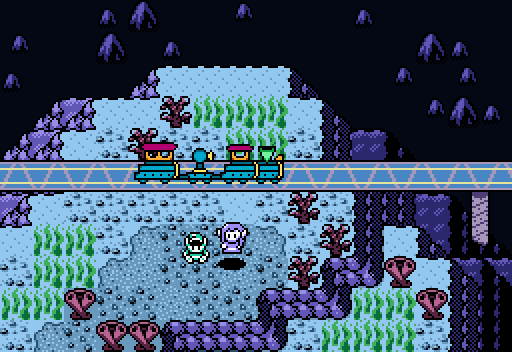 Recreate the following screen in any tileset. You have until... the 17th of September! 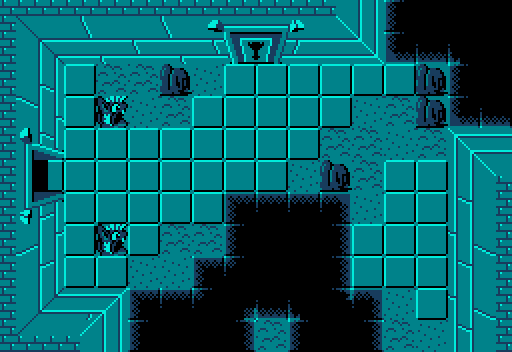 The sharp straight line between lava and ground in Joelmacool's entry is the first thing that drew my eye when I looked at the screen, and while the Gameboy games do that all the time, I don't think it's a good look in a screen contest. There should be border tiles here. I know that the dark floor tiles surrounding the lava are a purple version of the crusted lava in the games, but I don't think that making them purple works here. They don't look like crusted lava anymore, but they do make the floor look damp, which is a weird look for a lava dungeon. Aesthetics aside, I like the general structure of the screen and could see this place being pretty fun to play.
Shoshon's screen just...doesn't have enough going on to catch my interest, really, which feels kind of wrong in a screen that's floating in a vast orange sky. But the plain itself and the trees to the side just feel flat and lifeless here, and the green and dark orange colors don't complement each other very well.
There's individual tiles I'd criticize in Hari's screen--the tracks don't look like train tracks, and the train isn't in the GBC Zelda style technically I'm pretty sure the mountains are from Pokémon but this doesn't bother me the same way--but this is still just a really pretty, creative screen that easily takes my vote. I'm not sure the maroon coral fits perfectly with everything else, but aside from that the palette is gorgeous. I really love the mountains off in the distance.

Oh I forgot to say in my screen's description that it's based on the underwater tracks area from Spirit Tracks.

Also yeah, the train sprites could be better. I kinda just threw them together in like an hour lol. 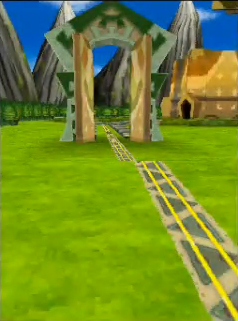 (the spirit tracks from the actual zelda game for reference)

I know Spirit Tracks look a bit different than actual tracks! I think they still manage to capture...well, the spirit of train tracks in a way that your screen's tiles don't quite pull off. I can try to pinpoint why if you're interested...I won't launch into that spiel automatically, since tile criticism is a little different from screen criticism.

For reference, my screen was based on this.

Yeah, I wouldn't mind if you could explain more in depth how to improve the spirit track tiles.

All right, let's see. I think the biggest issue is a lack of implied depth to the tracks--the current sprite looks colorful but flat, sort of like the trail in Rainbow Road. I think you'd want more outlines inside the tile itself to fix this--not necessarily surrounding each board completely, but at least enough to imply shadows and make the edges less of a perfect straight line.
I don't know if it's a trick of the eyes or not, but the triangles in your tiles look like they follow more of a rounded sine wave pattern than like they're straight boards. I think the path to fixing this would be either making the lines thicker, or dropping the triangle pattern of the original and making them steep trapezoids, on top of the stuff about outlines for shadow. This is one of those things where I'd need to get my hands dirty myself to know for certain.
The blue yellow purpleish colors, together, are a little outside the GBC Zelda style, which tends not to put wildly different colors together in one tile unless one is the off-white highlight it likes to use. (There's a few exceptions to this, like those flower patches, but they're rare.) This also applies to the train sprite's bright primary colors--they're pretty, but they don't feel Zelda.
I hope this was useful, feel free to ask for clarifications if I got too vague anywhere!

Oh I made some improvements to my screen last week, so uh here you go lol.

Back to Screenshot: Challenge Accepted

Also tagged with one or more of these keywords: Hari, Joelmacool, Shoshon the Elegant