60 replies to this topic

This quest was originally made for the two week quest contest back in 2015.  For a while, I was adding new content to the game until a couple of years ago I had stopped working on it due to motivation.  However, I looked back at the quest a few weeks ago and decided to finish up the last little bit of what needed to be done and finally get this quest released on the database (something I personally felt was long overdue).

Hope you guys enjoy the official release of The Slipstream, now with new postgame content!

This will also serve as a help thread, so if you guys have any questions, feel free to ask!

Oh, I remember this!

I was going through my 400 ZC alpha/beta folders a few weeks ago and consolidating them down to a couple final folders, and I came across your 2017 expo entry for this. I was wondering whatever happened to it.

I really did like it back then, so hopefully I can play the final version soon.

This quest is awesome so far! Got so lost considering I figured out later that I could go to the town.

Loving the use of DK64 music.

Spoiler
My strategy was to mainly use the candle on him for maximum lingering damage.  The best thing to do against him is to keep your distance.  Alternatively, arrows and the fire rod can be really useful as well.  The enemies that spawn in this particular battle can only be hit by an item that's their opposing element and also die in one hit (they also can drop stopwatches, magic, and health, so that could also help with ammo and healing if you have the magic turns to life item).  There's also a shop that opens at Level 3 in the main town that has some healing items if you haven't found any of those.

I was fond of the original, and this has built on it beautifully. I don't want to spoil it for anyone, but it's definitely worth replaying to see some new stuff.

RedTribeLink  First off all what a relaxing game its great i have one question in the Hermitage Swamp you get the kinectic sword ive have that but i need a key but checked every screen incl the sphere but no key any hints ?

The one I struggled with was at a dead end with a single enemy.

I believe it was the same screen where you picked up the sword. There's a single like-like, and the key is hidden under some grass or a bush there

The one I struggled with was at a dead end with a single enemy.

I believe it was the same screen where you picked up the sword. There's a single like-like, and the key is hidden under some grass or a bush there

in Hermitage Swamp reversed is a life scroll how to get that ?

Aranche, to get to the life scroll there:

Spoiler
Once you open the boss key lock, there is a patch of grass you can get to and cut on that same screen that reveals the portal leading to it.

Nice quest so far and I hadn't noticed any bugs until this one.  Unfortunately I think its a game-breaking bug 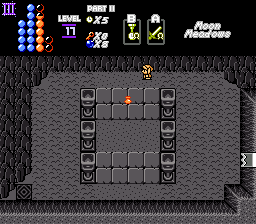 I'm playing it on the hardest difficulty and I'm on 70 deaths so far and for the most part I'm enjoying the quest so far.  You have different modes of difficulty so I presume that the hard difficulties are your attempt to win over the challenge quest players.  The difficulty is there and the quest is certainly no pushover but it feels artificial and unnatural.  Its kind of like someone has written something in their native language and then put it through Google translate and I'm hearing the translated version which has all kinds of syntax and grammatical errors.  I can immediately tell that this guy isn't a native speaker but I understand the message.

So why does it feel so artificial and unnatural?  First, the experience system can be exploited if a player spends enough time grinding up to the part where they need relics to continue levelling up.  If a game allows a player to manipulate the difficulty through grinding then they can legitimately make it very easy and the challenging difficulty is gone.  Its like Zelda 2 on NES - a player can make the early game very easy by grinding XP and levelling up.  Second, there are blades of grass everywhere.  A player can refill their life and magic whenever there's just a single tile by grinding and that can never be allowed in a very difficult quest.  Third, items that decrease difficulty are hidden or can be grinded for.  There are heart containers, magic containers and relics that can be found throughout the quest and are hidden behind secrets.  If you miss these secrets then the game becomes much harder.  But if a game is centered around hard challenge then it shouldn't be about how good a player is at finding secrets - its about how well they fight in combat.

Its quite obvious when playing the game that the central theme is puzzles, secrets, nice graphics, easy difficulty which is what I presume that you enjoy.  The kind of quest which appeals to the modern Nintendo Zelda player which is the vast majority of the player-base here.  The difficulty buff is quite cheap and therefore will never win over challenge quest players compared to a quest whose central theme is the challenge of the quest (see Liberation of Hyrule, Armageddon Quest, Mike's Fun House, Isle of Rebirth Heroic).  What can you do about all this?  Not much I'm afraid - you're bound by the first and second laws of quest making.  Only professional developers who are out to earn large profits from challenge quest players would ever spend large amounts of time making a quest that they themselves don't really and truly enjoy deep down.

Finally, I predict that this quest will "sell" well.  You should expect a large fanbase with lots of 4 or 5 star ratings on par with recent hits like Rite of the Storm and Yuurei.

Anyone know where the purple elemental guardian is? I've got all the ores and it looks like this is the last thing I need to progress, but I have no clue where to find it. The other three were all in areas loosely connected with their elements but the only thing I can think of for Sliptonite is Moon Meadows. It does have one screen with very suspicious floor tiles, but there's nothing there.

Edit: Found it, I didn't realize that

Spoiler
End Stream also has a back dark side.

I'll probably get a warning point for this but I don't care -- James24 we get how you feel about difficulty.   You've made it very clear to everyone.  You don't need to point it out in every post.  Your schtick gets really old.

I'll probably get a warning point for this but I don't care -- James24 we get how you feel about difficulty.   You've made it very clear to everyone.  You don't need to point it out in every post.  Your schtick gets really old.

Call me a thought criminal too then, because I'm sick of it as well. James has been injecting his philosophy about difficulty into all his reviews recently and it really brings a downer on everything. I get that that's his thing and he likes to argue about it, but he's been laying it on especially thick recently. Particularly the speculation about reception aspect. You can give your thoughts on the game without speculating how it'll "sell" to the greater community. That shit just makes people self conscious about stuff that ultimately doesn't matter.

It's a damn good quest. Just beat it today. That last boss was pretty cool for being made of just newbie boss scripts. I was actually fairly challenged on normal, so I'm rather curious how the quest plays on higher difficulties.