As I mentioned earlier, I want to make a quest while playing with different CSets to create landscapes, like CSet 2 for plains (Hyrule Fields) and CSet 0 for a snowy mountain (Namut Peak). Here is the link to the topic:

I will use one Cset per DMap and I'm using ZQuest 2.55. That's why I ask you : how can I change DMaps using Warp Points, for example after clearing a dungeon?

Generally when stitching your overworld areas together, you'd use side warps (Screen->Side Warp). These are up to 4 warps that are triggered when you scroll off one of the four sides of the screen. Here's one such warp in LQftH2 which uses a segmented overworld with multiple different area palettes: 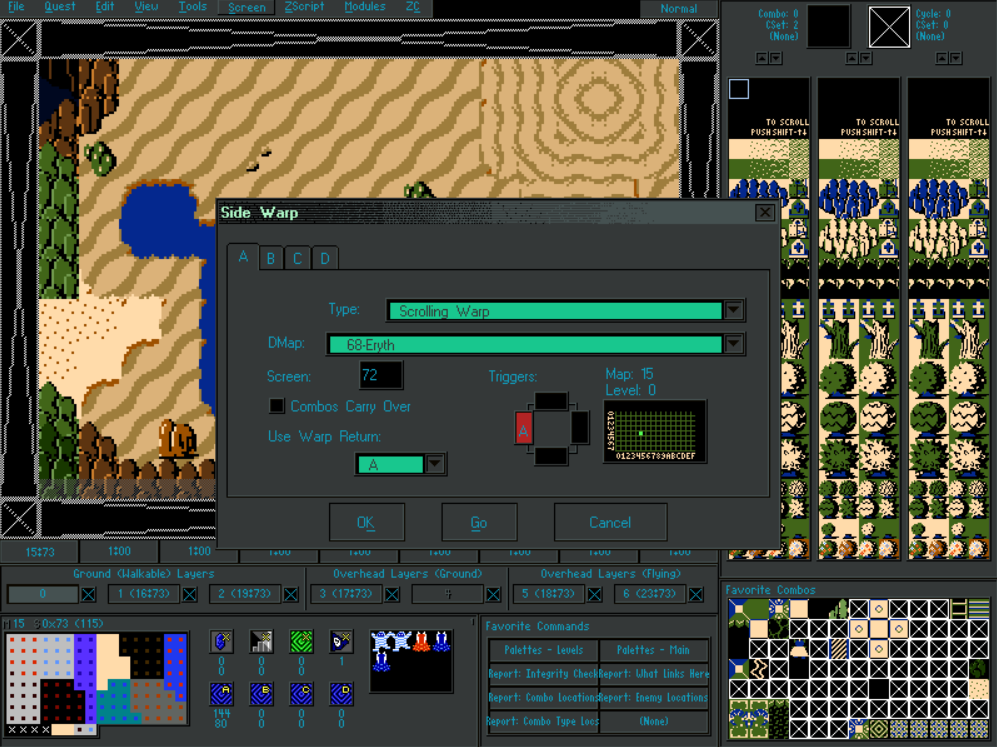 The four boxes in the middle correspond to the directions that are active and which warps they're associated with, in this case only one going to the left using Warp A. Since this is an overworld warp it uses the Scrolling Warp type which imitates regular scrolling behavior between two screens. Beneath the warp type is the DMap it leads to and the screen within that DMap. You can hit Go to test if your warp is linked to the correct screen (handy if you get into DMaps with screen offsets).

I'm not quite sure what you mean by "after clearing a dungeon" but assuming you mean when exiting via triforce, that also uses side warps. In this case it uses side warp A and you just use the Insta-Warp with Zap Effect warp type instead of a scrolling warp.

Okay, thanks. If I understood right, I have to use Side Warp to warp Link from one DMap to another, is that it?

Sidewarps are especially useful if you want to warp between different DMaps, which use the same map (for examle, different overworld areas).
...doors, stairs and other tilewarps are mostly used to enter houses, dungeons etc (warp to interior/dungeon DMaps)

Back to ZQuest Editor Help