So um, hi. It's kind of been a year and a half since we posted here. Lots of things have happened realife-wise but regardless, let's talk Zelda Classic. This update is meant as a bit of a dev talk topic with me sharing some of our thoughts behind some of the design choices in Crucible Crest. We may post a few more of these in the future.

Aesthetically, the project is inspired by the barren look of the Zelda 1 screen design and the lonely and adventurous feel of its original artwork. One day Mitchfork approached me, telling me about some of the Gameboy Zelda gameplay mechanics he has remade in Zelda Classic and his plans for a quest project which revisions Zelda 1. He showed me a first screen that he mapped, a piece of concept art with the mood he wanted to go for and asked me whether I'm in as a screen designer for the project. With my own love for Zelda 1 and the countless recreations of its overworld that I have worked on over the years, I was immediately sold on the idea and started mapping the first overworld area. We came to call it Outset Hills.

Below you can see in the order from left to right: Mitch's first screen for the project, the piece of artwork he referenced and my take on it. 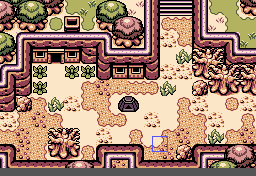 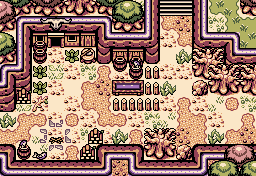 The section of the world that I want to talk about are namely the Outset Hills, which are meant to represent the first couple screens of the overworld that you can explore in Zelda 1. As you well know, it's basically mountains and caves originally. Strangely enough, there are no houses and all inhabitants of Hyrule have taken residence in caves. They are in this area: the old man that gives you the sword, a merchant, the old woman that sells information, an old woman that sells potions and the secret-to-everybody-Moblin in the hidden cave. There's also the guy that wants to play "money making game", but he didn't make into Crucible Crest (yet). Talking about the characters in the area, we started to flesh them out a bit more so that I get an idea what the places they live in should look like. Mitchfork had this idea that the old man is a blacksmith. He has forged many swords for many heroes over the years, but none of them has proven themselves to the blacksmith yet. He is very old and knowledgeable of the history of Hyrule. Mitchfork mapped the interior of his cave, taking cues from the little comic below (in the spoiler tags). You can see some of his personal belongings, among them a hammer in the design of Ocarina of Time's Megaton Hammer on his desk, a blueprint for a new weapon on the northern wall and his journal next to his bed. 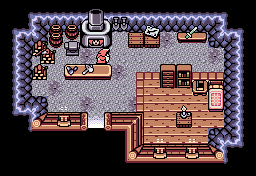 Because we needed a character who would tell the player where to go next (i.e., where they can find the next dungeon), I suggested that we remake the information-woman in the cave east to the starting screen into Impa, who is a diviner in our game. Talking to her is completely optional: players that prefer the Zelda 1 style of free exploration won't be handholded along the adventure, but learning from Impa where the next dungeon is always gives a bit of flavorful dialogue. You may also choose to explore on your own first and come back to Impa if you are stuck. Below you can the exterior of her home, what it looks like inside and the concept art I referenced. She is associated with the Sheikah, some of the details in her house give it away, too. 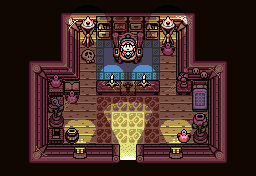 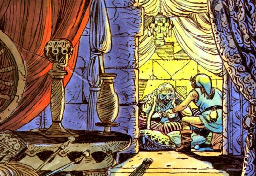 Next we have the merchant. Because he's a big guy with a mean look in the artwork, we wanted him to be a money-minded and greedy character. We call him Shady, the merchant (because he's a shady merchant). His prices are somewhat exorbitant... I can't exactly say why, but I did not want to hide him away in a cave. So he was moved to the overworld. He has a wagon for his goods with which he travels Hyrule. Later in the game he may show up elsewhere with different merchandise (- if we choose to implement that; we never really made a final decision regarding that idea). Here's what his shop looks like. I like all the little details on this screen. Most of the objects are interactable, such as the big sword and the red shield - walking up and pressing the A button will give a bit of dialogue. 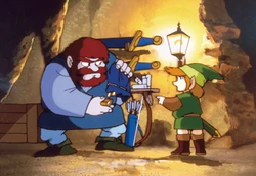 The secret-to-everbody-Moblin is such a classic character that we had to include him, too. He moved up a couple screens onto a small moblin encampent where he resides in a skull home. Mitchfork set up a funny little cutscene for him which I really like. Traversing the encampment is a little dangerous from the get-go, but it's a good way to get some big money early on. 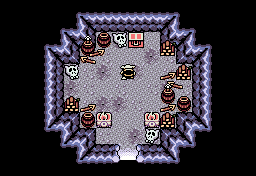 Finally, we have the potion shop. With Impa being an old lady, we didn't really want to use Syrup (another old lady), so we settled on Maple. In the demo, her shop wasn't open yet, but in the meantime Maple has moved in fully. Instead of the "letter" item, you can bring recipes to her to unlock new potions or upgrade potions you have already unlocked. Most objects in her house are interactable, too. Mitchfork wrote a tiny update about Maple's potions ...a while ago. Go check it out. 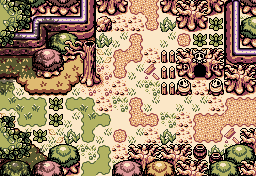 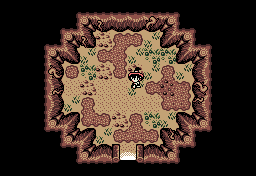 And well, that's that. This is all a bit dated stuff, I know, but yeah. Do let us know how you like everything and what you think about our take on the world of Zelda 1 and its inhabitants. Cheers!

I love hearing about y'alls thought process regarding designing this quest. While playing the demo, I could definitely tell that a lot of care went into all the little details.

It's good to get an update about this project -- I've been wanting to ask about its status but didn't want to pester you or Mitch about it.

Honestly, I haven't been thinking a whole lot about the project for maybe a year. But the itch is back and I have been retouching and adding a lot of content the past two weeks or so. I don't want to spoil the fun of discovering everything for yourselves, but I am confident you will like it, if you liked the stuff from the demo. A few glimpses won't hurt though, so expect some screens from new areas in the future.

I also want to add to this - because it was also part of the concept - Sheik had a couple of maps that he had done a while back - one here:
https://www.purezc.n...showtopic=75675
and one here:
https://i.imgur.com/huEDH3a.png

The second one was a Z1 redux project Sheik had wanted to get going with me back in 2015 (!!!) - unfortunately I was not even checking the website back then, and it was at a pretty bad time in my life.

Anyway, amid me coming back and wanting to try a lot of gameplay things, I came to find both of these and the Z1 redux map and this really influenced my picture of what the game would be - in fact you can see where I copied a lot of elements from Link's house (bottom center of the map) for the blacksmith's house - so you can really say that this is how the screen evolved:

So it all comes full circle in the end.

Anyway, it's cool to see this all laid out with the "mood board" images that we used.  Not to pat ourselves on the back TOO hard but I think Sheik has done and continues to do a really great job with the overworld - my contributions were all pretty minor in that regard (I've really done only probably like 10% of the screens on the overworld total even today).  But working like this let me focus a lot on gameplay, scripting, and writing which made that first demo development actually go remarkably quickly.

But yeah, we really should show some new stuff soon.  Sheik has made awesome progress so now it falls on me to start filling in the gameplay and getting into dungeon work.

Oh yeah, taking about previous renditions of Zelda 1 Hyrule, I got several more up the sleeve...

Oh yeah, that last map was definitely a huge influence too.  I think a lot of the dungeon entrances in this one influenced how I imagined the areas.  You can see how one goes from the original level 1 entrance, to this wastelandy island, to Rotgrip Isle in the demo, for instance.  And I think other ones in the east especially are similarly connecting concepts.  But this is getting off-topic into what could be another whole post about interpreting the world design and how we made those geography changes, honestly.