Heya guys i would like to ask a script request. I know i've already made one a week or some days ago but i wanted to try it anyway ^^'

The script would requires the Roc Feather for this one. The function would be very simple: If Link jumps on a specific combo like a color tiles for example and lands on it, the combo will switch with another combo and so on. For the moment there's only 4 combos that i've setting for a puzzle.

Check on this screenshot for example: 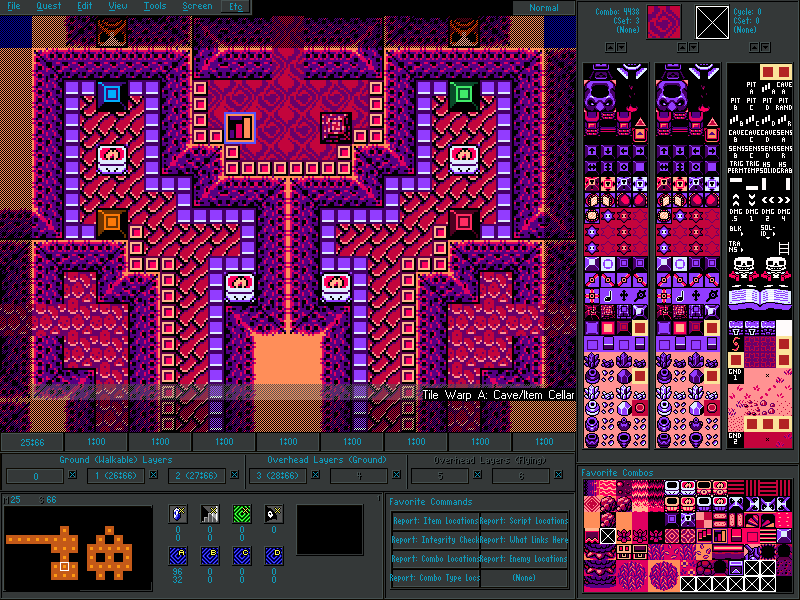 This one is the hints for the tiles puzzle. Edit: I've changed the screenshot to make it less painful ^^' It's may be the same as the old one but i've made it less painful for the eyes just in case.

This one is the puzzle itself.

The thing is very simple: If Link solves the puzzle with the correct colors (in the correct way) a secret flag will trigged.

The D0 would be the correct color. 0 would be green, 1 would be blue, 2 would be red, and 3 would be yellow. If there's more then one puzzle then another FFC would be needed i think.
The D1 would be the inital color. 0 for green, 1 for blue, 2 for red, and 3 for yellow. There would no need to do that if the quest creator choose to put the combo directly (if a Combo version would be created with the FFC version.)
The D2 would determine the secret tiles flag that would be activate first. If leave it to 0 it'll activate by default (like a normal secret trigger would do when we solve a puzzle). If it's setting on 16 to 31 with multiple FFC of the script if the quest creator would want more then just one tiles puzzle that would be very helpful for example on a big dungeon or a final one. As for the D7 it would be the sound of the tiles that is switched when the player lands on it

Maybe it's a little bit to much or too far but here's goes nothing to try it.

I'm sorry for going off topic but could you please tone the first palette down? My eyes hurt a little from looking at it.

Back to Script Requests