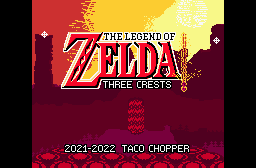 I wasn't going to release a second demo so soon after the first one released in April, but the progress this project has taken since that release has meant it's become a very different quest. Most of it has been quality of life improvements or area reworks, but there is also a lot of new content in here as well.

What makes up this demo's content?So, what's in this demo compared to the April demo, then?credits:
development:
Taco Chopper

To everyone who's contributed to this project so far, be it in the form of feedback, testing, scripting, graphics, you name it - thank you very much. I wouldn't be releasing this demo right now if the community around me wasn't as supportive and constructive as you all are.

Additionally, this demo wouldn't exist without Deathrider365 asking me about the gameplay time of the first demo - it took me two months to get the demo to him, whoops. He streamed a playthrough of the demo yesterday, with myself on special comments:

well, only half a day since it's been out but a new hotfix is on the way. jwex001 messaged me this morning with a very solid bug report; nothing too game-breaking, but it's all been patched up - say hello to version 2.1 lol

it's already available from the mirror link, while the project's demo link will be updated when admin ticks off on it.

I think it's a good call to have a 2nd demo instead of what you originally planned. Loved the stream, too!