I would like to extract the GBC tilesets in different palettes into image formats, in order to create map images outside of Zelda Classic, for use in other projects.  The ZC GBC tilesets have the most complete GBC Zelda tile rips that I've been able to find.

My initial solution was to go into the tileset previewer with the screen set to the palette I wanted, and export each page of the tileset individually, however this produced some undesirable results with colors being wrong or strange on certain tiles.   I noticed that these issues were fixed in the combos, but the combo previewer doesn't seem to have an option to export to images like the tileset viewer.  What would be the best way to go about doing this?

The only way I can see to do it would be to screenshot the pages from the tile viewer, but unfortunately there are white separator bars going through certain columns of tiles that mess with the pixels, and would take a lot of tinkering to remove.  The only other alternative I can see would be to screenshot the combos on the right side of the main editor screen, but that's a really cumbersome menu to navigate and it would only allow me to screenshot a small part of the combo list at a time, and then each part would have to be stitched together, and it would be a tremendous undertaking.

Is there some easier way to do this that I'm missing, or any alternative that I'm not thinking of?

A bit confused by some of the terms you use, but have you tried hitting this export button for every page? 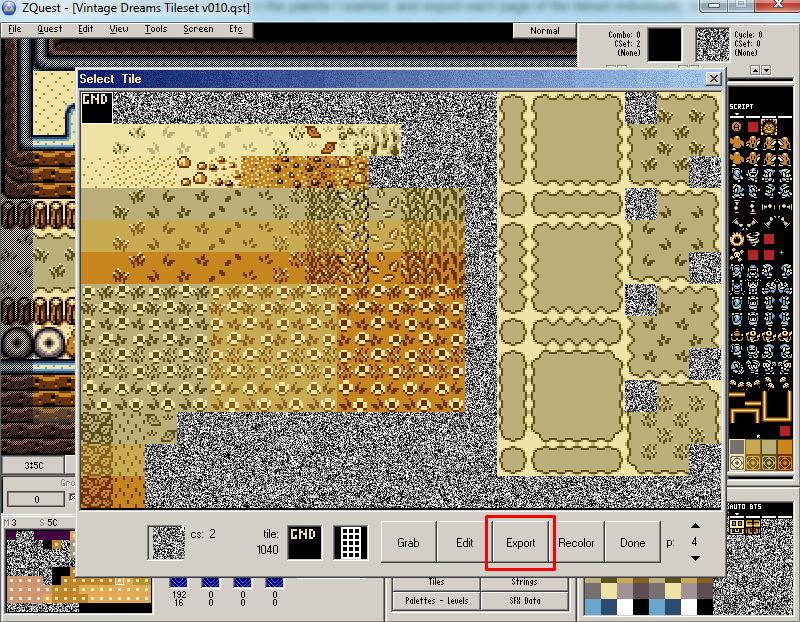 Change the palettes on a screen with F4 to change between overworld and dungeons palettes and use + and - here to change CSets. Sprites use different CSets than tiles.

That is what I was doing before.  That's what produced the undesirable results I linked.  Trees and some tiles would have certain parts of them be the wrong color, but they would appear normally in-game because the combos corrected them.  What I want is a similar option in the view combo menu, seen here: 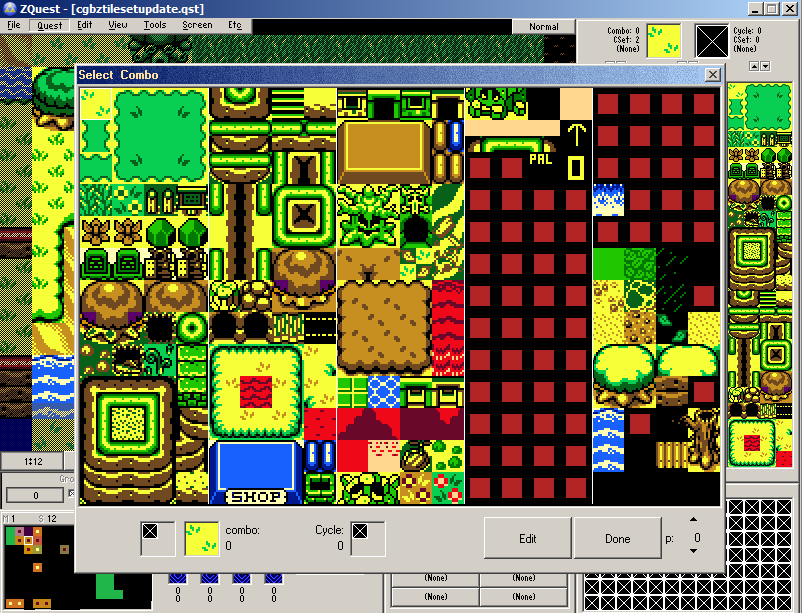 It looks just as bad in the combo menu there. Maybe you've grabbed a bad version of the tileset.

Have you checked The Spriters Resource? I haven't looked through every single tile, but between the 3 GBC games, they seem to have a fairly complete set.

It looks just as bad in the combo menu there. Maybe you've grabbed a bad version of the tileset.

That tree was just a bad example.  It's hard to explain this since I barely have any familiarity with the program, but it's not a question of which version of the tileset it is.  The combo will always look better as that's the tile with all proper palettes applied to it that actually appears in the game.  Here's a better example:

I've tried other versions of the tileset.  Other things like water or door colors and such, which use special palettes, are messed up in all of them.  And the palettes in Vintage Dreams, despite that being the most complete version of the tileset, are inaccurate to the games.

Have you checked The Spriters Resource? I haven't looked through every single tile, but between the 3 GBC games, they seem to have a fairly complete set.

That was the first place I checked.  Spriter's Resource has some full maps, but they aren't arranged in tileset format.  The tileset rips in Zelda Classic are much more complete.

Well this is definetly a bad tileset. Try EZGBZ 2.5 or vintage dreams instead. The colours and graphics here all look messy. Also normally the tiles viewer shows you stuff correctly too.

Alright, well I would like to use Vintage Dreams as it's the most complete, inaccurate palettes aside, but it does have one big problem that I don't know how to solve.  The transparent color appears in the tileset viewer as black, which is the same color as certain outlines in certain tiles.  This makes any transparent tiles with black in them completely unusable.  In comparison to EZGBZ which uses pink as its transparent color.  Is there any way to change this?

EDIT: Nevermind, I figured out how to edit the transparent color in the palette.  Unless anyone has any other suggestions, this is probably as resolved as it's going to get.

What image editor are you using? As always, I suggest Graphics Gale for anything related to ZC.

The reason the colours are messed up in the tile sheet is because, I suspect, the combo uses the secondary cset feature (like with walkability, each combo can have any of it's four corners assigned to a second cset). Since the tile page only shows one cset at a time, these tiles look wrong.

One option (and admittedly this is cumbersome and time consuming) is export each tile page in the necessary csets, create an image with each cset assigned to a new layer, then delete every quarter tile that's in the "wrong" cset. However, if you use this approach then you'll have to manually add in duplicate tiles that use more than one cset (e.g. if you wanted both red and blue octoroks you'd need to duplicate the tiles since, I would imagine, there's only one set in the tilesheet that uses multiple csets).

An arguably better option is to just draw the combos you want to rooms in zquest, take screenshots of the rooms then stitch the images together.

I would guess that the combo is using a CSet 2 setting. This changes the color of the tile being used, with the ability to change any given combination of the 4 corners of the tile- though they all must be changed the same. Check the combo and see if the 3rd box at the top has any blue in it (in the editor menu for the combo in question). If so then this is an intended part of the combo, and will never look right on the tile sheet. You export the tileset as normal, and when you make a combo with one of these tiles, you need to set the CSet 2 settings yourself.

Back to ZQuest Editor Help

Also tagged with one or more of these keywords: tileset, zquest, tiles, palette